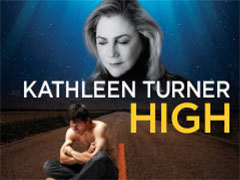 The National tour of Matthew Lombardo's HIGH, starring Kathleen Turner, opened at the Parker Playhouse on February 29, 2012, for a one-week engagement


...High provides a more satisfying theater experience than you might expect from a play that lasted less than a week after its 2011 Broadway opening. The proof of its power to connect with an audience comes again and again, in the laughter at wry quips, gasps at plot revelations, from the clearly attentive silence as Lombardo’s harrowing story unfolds.

The play’s commanding star deserves plenty of credit for making High so watchable. Lombardo crafted the character of Sister Jamison “Jamie” Connelly with Turner in mind, and throughout the play’s pre- and post-Broadway journey, Turner has perfected her performance...  Salty, confrontational and given to the occasional shocking jolt of foul language, Sister Jamie looks and sounds like a woman who has lived, and lived hard.

With tight, clean direction by Rob Ruggiero, High takes an unflinching look at the realities of chronic drug use, and watching as Jonigkeit’s Cody shoots up and shudders is as terrible as anything you’ll see on a reality TV addiction show. The magnetic Jonigkeit, by turns sullen, angry, evasive and vulnerable (he becomes naked both physically and emotionally), is a powerful and effective scene partner with Turner.

...while High never soars to become one of those experiences you’ll remember long after the theater empties out, thanks to Turner and Jonigkeit, it proves an absorbing look at ruin and redemption.


While the star vehicle has some fairly unexceptional dialogue and a clichéd plot, which certainly contributed to its closing on Broadway a mere five days after it opened last April, Turner uses all the tricks in her veteran actress’s tool box to ensure that her audience hangs on every line. And they do. But while she is a force to be reckoned with in her role of the foul-mouthed, unconventional Sister Jamison “Jamie” Connelly, it’s not enough to lift High to angelic proportions.

...Evan Jonigkeit as Cody, who made his Broadway debut in High, plays his Cody as second fiddle to Sister Jamie, never really going up against her despite dialogue that should put them neck-in-neck. Turner always has the upper hand in every scene, which creates an odd tension, especially when the dialogue tells us that Cody is starting to make her crumble.

Jonigkeit gets his footing in the second act, but he still can’t cast off his bad-boy caricature long enough to come from any place of true soul.

Tim Altmeyer chooses quiet calm for his portrayal of Father Michael Delpapp (Altmeyer  was also in the Broadway version). He brings a strong likeability to Father Michael and scenes between Altmeyer and Turner as they ping-pong back and forth creates sparks. Pity Altmeyer, but applaud his acting abilities.

There’s no doubt that High has its ups and downs.  The saving grace here is Kathleen Turner, one of the best actresses of a generation, who has found a way with High to turn lukewarm water into something resembling a fine wine.

HIGH plays at the Parker Playhouse through March 4, 2012.
Posted by C.L.J.