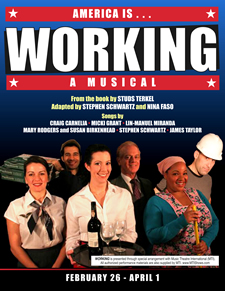 The Caldwell Theatre Company opened its production of Working on March 2, 2012, after four preview performances.


WORKING encompasses the hopes, dreams, joys and concerns of the average working American. In the course of one 24-hour workday, the audience meets and hears stories of various workers including the Fireman, Teacher, Money Managers, Homemakers/stay-at-home mom, Retirees and more. A musical exploration of 26 people from all walks of life, WORKING celebrates everyday people in a genuinely funny and touching way. WORKING fills you with hope and inspiration and is the perfect musical for everyone who has ever worked a day in their lives.


Stephen Schwartz's musical Working may not have been a political polemic when it premiered on Broadway in 1977, but in today's polarized climate, anything that takes a sympathetic stance on salt-of-the-earth workers is liable to be read as left-wing indoctrination. Recent script revisions reflect the income inequality of our times: At one point in the Caldwell's revival, which runs through April 1, Barry Tarallo convincingly inhabits a slithery CEO who champions deregulation and praises the invisible hand of the market to correct its wrongs. It's a short but chilling examination of the way the other side thinks, and it's one of the fiery, of-the-moment undercurrents that elevate what is otherwise an imperfect show.

There is no plot tissue connecting the disparate scenes; unlike the much larger Broadway version, the characters here don't have names. This can create a clinical disengagement between the audience and the actors. Because character-building is nonexistent, few of the scenes connect on an emotional level, though several stand out as impressive individual pieces. Kareema Khouri's study of a single mother slogging through a hellish factory job so her children can have a better life is made immensely moving by the performer's gospel-ready vocals. Witty choreography and Laura Hodos' perky exuberance help sell an enjoyable number about a waitress who loves her job.

The entire cast is solid, in fact, with Tarallo traversing between workingmen and empty suits with aplomb and Jim Ballard acting as the production's embodiment of the rugged manual laborer, complete with hardhats, tool belts, and a 5 o'clock shadow. Problems arise when the source material veers out on strange, rambling limbs, leaving its actors hanging on to them as best they can.

But by the time it ends — two or three songs too long — Working swells with patriotic populism, with the six-member company celebrating the kinds of workers we take for granted, the unacknowledged engines of the American experiment. It's a rousing climax to a musical with its fair share of crests and dips, riding a wave of solidarity that sticks it to the 1 percent. Comrades, rejoice.


Despite its promising concept, when Working arrived on Broadway in 1978, it lasted a mere 25 performances. But Terkel and Schwartz were on to something undeniably stirring and primal, which would not die.

So 30 years later, after more interviews were gathered, a downsized, updated version of the show was created, and now Boca Raton’s Caldwell Theatre has given it a very winning production.

The vocal arrangements for this new take on Working emphasize group harmonies, but there are still plenty of solo spotlight opportunities. Charismatic Laura Hodos is a standout as a histrionic waitress on Schwartz’s It’s an Art. Jim Ballard... is very affecting on a slightly off-topic number, Fathers & Sons.

Melissa Minyard impresses in a ballad of the under-appreciated (Carnelia’s Just a Housewife), Barry Tarallo represents the challenge of retirement in the number Joe and Kareema Khouri providing a rousing belt in Grant’s Cleanin’ Woman. The find of the production, though, is recent Florida Atlantic University grad Michael Focas who handles the score’s two new Latin-tinged tunes by Lin-Manuel Miranda with buoyant versatility.

Working is a canny show choice for the Caldwell... As revised, Working is virtually a new work, but its roots are in musical theater conventions. And with this terrific cast to sell it, Working simply works.

...there isn’t a weak link. Each actor and actress is able to switch gears seamlessly to take on the next role. Everything moves effortlessly across Tim Bennett’s sparse set while projections on the two back walls give a sense of place with large Google topography maps...

...Dave Campbell’s simple choreography is entirely spot on as he creates movement that is in keeping with how regular folks would move... Kudos to the choreographer for sparing us a truck driver or delivery man who can do slick Fosse moves.

With its talented cast of Equity actors and Cholerton’s wonderful understanding of the show, Working plays out on the stage as a labor of love for all involved at Caldwell Theatre Company. Audiences will find it introspective, relatable, and a thoughtful testament to the times we live in.


...the Caldwell Theatre Company’s new production of Working, a 1977 musical based on Chicago writer Studs Terkel’s interviews with people in all kinds of jobs, arrives at a time when work or the lack of it is on most people’s minds.

Under Clive Cholerton’s direction and the musical direction of Caryl Ginsburg Fantel, six talented actor-singers and three musicians take the audience on a journey into the lives of workers in various cities throughout the United States, with one long-distance detour to Mumbai...

Scenes stitch the songs together, but Working is most powerful or tender or thought-provoking when the performers are singing.  Jim Ballard, Michael Focas, Laura Hodos, Kareema Khouri, Melissa Minyard and Barry J. Tarallo all play multiple characters, and each gets a chance (or two or three) to shine.

...Focas is most poignant on Miranda’s A Very Good Day, in which he and Minyard sing of helping the elderly and the very young in other people’s families while spending long hours away from their own loved ones. Tarallo (who seems to channel Taylor with his sweet, folk-inflected voice) plays guitar as he sings Carnelia’s beautiful The Mason, then morphs into a retiree named Joe (the song is also by Carnelia) musing about his slower life and treasured memories.

Minyard’s standout piece is Carnelia’s Just a Housewife, in which she veers from resentment to contentment, anger to resignation as she sings about her choice to be a stay-at-home wife and mother. On Birkenhead and Rodgers’ Nobody Tells Me How, Hodos plays an aging veteran teacher who isn’t coping well with the large classes and diverse student population that are the norm in 21st century education. Then on Schwartz’s It’s an Art , she morphs into a sassy waitress, a look-at-me gal who won’t be earning much in the way of tips, judging by the looks on her customers’ faces. Khouri gets two standout numbers, the first as a spirit-crushed luggage factory worker on Taylor’s Millwork, the second on Grant’s Cleanin’ Women, in which she vows she’ll be the last of her family to clean up after others

Rod Stafford Hagwood was sent out by the Sun-Sentinel:


...these are not the kind of people we are accustomed to seeing burst into song. Blue-collar workers never get their own musical. Here they do, bathed in Terkel's gritty, savvy milieu, and towel-dried in stage-musical oversentimentality. In the hands of a director less confident than Clive Cholerton, that could be dreary dreck.

The same could be said of the cast, which has been whittled down from the Broadway version's 17 to a more-wieldy six. Jim Ballard, Michael Focas, Laura Hodos, Kareema Khouri, Melissa Minyard and Barry J. Tarallo all sing the score well. More than well actually -- they sing with nuance, finding texture and the subtle shadow and light of each song, even those tunes that could use just a tad more muscle. Even without an intermission and trimmed down to a fleet 90 minutes, "Working" still seems to overstay its welcome.

But this fine cast and fine director just can't prevent the show from feeling repetitive and predictable. Everyone is so darned earnest, that when another updated character – an I-got-your-trickle-down-right-here money manager – lets loose in his vignette with a free-market diatribe, it sounds fresh and vibrant.

Working plays at the Caldwell Theatre Company through April 1, 2012.
Posted by C.L.J.