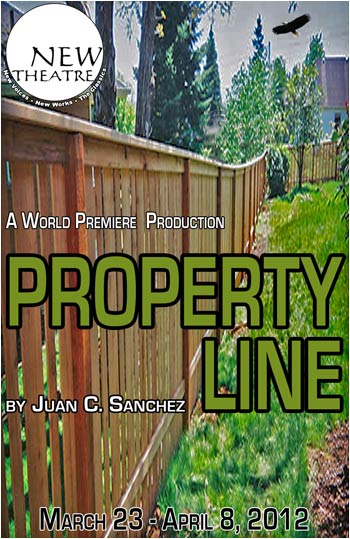 
In this relevant and funny play about real estate and territorial instinct, two long-time friends and neighbors are at war over 15 feet of green grass on waterfront property.


Comedy. Tragedy. Absurdist farce. Subtle satire. Family drama. Sociological tract about race relations. Juan C. Sanchez’s world premiere Property Line at New Theatre encompasses all this and more in an intellectually intriguing, promising script that needs a lot of work before it will gel into a satisfying evening of theater.

It’s not that all these disparate genres can’t be melded together in theory, but the script in its present form ranges so far and wide tonally that director Ricky J. Martinez and an earnest cast simply cannot make the melange credible.

Even so, acknowledge credit Sanchez’s skill that he has developed over the years... Sanchez has a real talent for funny dialogue as well as tender moments such as the Anglo couple teasing with each other about sex and the Hispanic mother trying to get her son to speak endearments to her in Spanish.

One serious structural problem is that we never see the two families at the starting point of the narrative arc when they are close friends or, at least, one family is fooling themselves into thinking that.

At the other end, the play has two extra scenes that show the aftermath of the inevitable nuclear explosion, but they seem dramaturgically unnecessary. One playwriting and directing tip (and we’ve seen this a lot recently): When the audience doesn’t applaud at the end of a play as happened here, it’s often because they don’t know it’s over.


Property Line, a wild in-your-face dramatic comedy (or comedic drama, take your pick)... has just opened at Miami’s Roxy Performing Arts Center, with a move to the South Miami-Dade Cultural Arts Center for a weekend in mid-April.

Stylistically, Sanchez’s sensibility is dark and edgy, mixed with humor that flows from his characters’ quirks. Those qualities are all evident in Property Line, a play about a changing Miami, the threat of violence, prejudice that is both subtle and overt, and the fragility of seemingly solid relationships...

Martinez has cast Property Line well, particularly in the case of Sloan and Schwartz. With a clear chemistry, the two become fully realized if flawed people. That Sloan makes Mag (rhymes with “nag”) interesting is especially impressive, as the woman has rampant ethnic biases and a truly filthy mouth. The latter is a trait most of the characters share to an extent that isn’t credible. That’s the playwright talking, not his creations.

The opening night audience at Property Line laughed plenty, the laughs flowing from well-crafted funny bits, absurd situations and squirm-inducing moments. Like most new plays, this one would benefit from trims, the shedding of fleeting issues that complicate the plot, and a rewrite that might, in part, offer more justification of Blanca’s flip from friendliness to fury.

There's a lot to laugh at here, but also a lot that'll elicit a gasp.   Cuban-American relations could be set back a hundred years.

Scott Douglas Wilson as Joe, a real estate lawyer, makes his quiet performance count at every appearance.   Not so fortunate are the others, whose larger than life characters leave little room for subtlety.

Juan C. Sanchez has had other plays produced locally, two receiving Carbonell award nominations.  I really, really wanted to like this piece (Juan and I did Twelfth Night together many years ago), but  unfortunately Property Line does not live up to his previous work.   A tight rewrite, taking the missing kitchen sink and loading it up with all the excessive melodrama, would work wonders.

Chris Joseph serves up a tainted mess for the Miami New Times; do a review of the work, or do an interview with the artists talking about their work, but don't do both at the same time.


With charm, humor, and tension-filled moments, Sanchez deftly uses this synopsis as a commentary on fear, loss, change, and, ultimately, the conflict of culture and perceptions that permeates South Florida. "I'm exploring feelings of displacement," he says of the play's layered themes.

See?  This statement doesn't belong in the review.  Either that comes through in the play, or it doesn't. The artist doesn't get to tell us what we were supposed to see - that's not how reviews work.

The only input the reviewer should include is what comes from the stage.  Because when we, the audience, are sitting there watching it, that's all we're going to get.  The director isn't going to be explaining to us why he had the actors do that, and the playwright isn't going to be whispering in our ear to explain what each line actually means.  All we're going to get is what is actually happening on the stage, and that's what the reviewer is supposed to be critiquing.

The New Times really needs to hire someone who knows what they are doing; and I'm not necessarily referring to Mr. Joseph; he has an editor who should know better.  If he thinks this is how a review should read, he's obviously incompetent. We deserve to have worthwhile reviews, and the New Times isn't delivering.

There's no point in the rest of Mr. Joseph's so-called review.  It's hopelessly tainted.