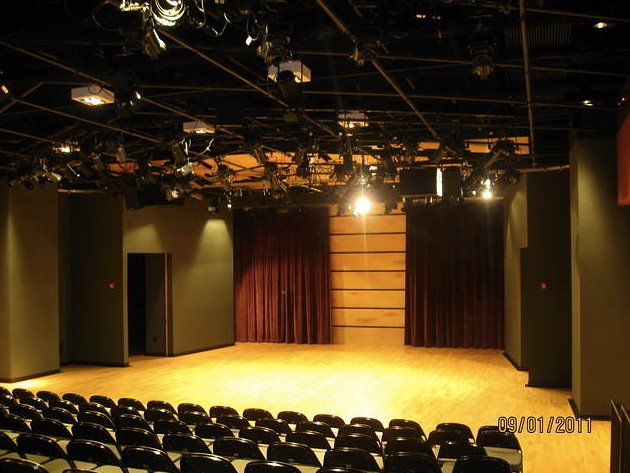 The record heat in South Florida's winter has seeped into our local theaters; things are cooking on local stages.

Today's "dark" theater is The Studio at Mizner Park Cultural Arts Center, which is home to Parade Productions and Outré Theatre Company.  The actual theater space is adequate, although the lobby and concessions could use serious reconsideration; a porta-bar in the foyer instead of using the banquet hall would go a long way to making intermissions more pleasant; it's a hike to get to that bar.  And like the Main Street Playhouse in Miami Lakes, parking can be a challenge during street festivals.

Not So Dark
Tonight is the kick-off production for the Theatre Arts Guild Florida New Play Workshop; Jan McArt returns to the stage in this reading of Tony Finstrom's Back Stage Story, and Florida Theater On Stage has the story.

When it Rains, it Pours.
Palm Beach ArtsPaper takes a look behind the scenes at the Maltz Jupiter Theatre production of Singin' In The Rain.


“The rain is actually over the entire stage. It’s sort of coming from everywhere. There’s a front curb that is actually seeping water onto the apron while he is dancing upstage. So that by the end of the act, when he goes crazy in the rain, the first four or five rows is going to need the ponchos we are giving them.”

Oh boy.  We didn't like getting wet at the Miami Seaquariam show; we'll stick to the back half of the theater, thank you.

Who Do You Call?
The Examiner wants to know which arts information websites you rely on to stay informed; and how you relate to them - as a patron, or as an artist?

Sneak Peak at Broward Center Renovation
The Broward Center sent us a link to the online version of their most recent edition of centerstage, their in-house magazine.  It's all about the work being done on the center, with lots of renderings of the end results.

She's the "B" in "Big Apple"
The Miami Herald reports that Ava-Riley Miles has landed a role in the Broadway production of EVITA.  The third-grader is play the role of Child, "a newly-written solo spotlight in the second act."

Meanwhile...
...in Palm Beach, the Royal Poinciana Playhouse is still closed, but the Shiny Sheet reports that there's a tenant prepared to invest $15 million in improvements in the 55 year old theater.


Rosow said that he’d met with two representatives from the group negotiating to lease the Playhouse, whose identity was not revealed because of a confidentiality agreement.

According to a joint statement from Sterling and the prospective tenant Munder read during the meeting, the potential lessee “has a documented history of professional success in both the performing arts and visual arts.” The group’s programming goals include “live performance presentations, including concerts and mounting regional productions, providing educational classes and children’s programming, advancing arts technology, and creating performance and presentation opportunities for local community arts groups.”

Well, if the deal falls through on this one, we know of a playhouse in Hollywood that a certain bank would love to unload...
Posted by C.L.J.