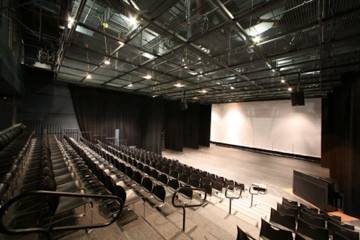 Of course, the Carbonell Awards nominations are out, but we'll be dealing with all of those articles later in the week.

Today's featured "dark" theater is the Carnival Studio Theater at the Adrienne Arsht Center for the Performing Arts.  It's actually a black box theater, which basically means that its maximum 350 seats can be set in numerous configurations.  It's currently the permanent home of Zoetic Stage, but Mad Cat Theatre Company has staged several performances there, and the Alliance Theatre Lab will be bringing The Brothers Beckett there in March.

We'll tell you about that and more on your Monday reading list.

Best Wishes to Bud
The Palm Beach Post reports that Burt Reynolds is apparently on the mend, after being admitted to a hospital for "flu-like symptoms." Reynolds is a native of the Palm Beaches, and built the Jupiter Theater, which anchors the north end of the South Florida theater scene to this day. We wish him a speedy recovery.

Fundraising can be Murder
So why not skip right to it?  The Drama Queen fills us in on the Alliance Theatre Lab's latest fundraising activities.  It's all in a good cause; they are taking their original production of The Brothers Beckett to the Arsht Center in March.

News from the Palm Beaches
Florida Theater On Stage reports that the Plaza Theatre has announced that despite critical acclaim for their recent spate of straight plays, they're adding more cabaret shows to the schedule.  The good news is that the acts include Jodi Langel, who wowed the crowds who came to see Next to Normal at Actors' Playhouse, and Missy McArdle, a solid performer with a storied history in the local theatre scene.

Over at Dramaworks, Broadway World reminds us that the latest installment of their Master Playwright Series continues  on February 4th & 5th with an overview of French playwright Jean Genet followed by a staged reading of The Maids on February 11th & 12th.

Speaking of Casting News
Broadway World reports that Miami Theater Center has announced that it's added Shaneeka Harrell to the cast of The Love Of Three Oranges.

"MTC has developed a reputation for its outstanding-quality productions, but having Shaneeka join the cast raises the bar even higher," said Artistic Director Stephanie Ansin. "Shaneeka is really at the top of the field, having worked on Broadway and as an assistant choreographer with Bill T. Jones. From the first moment of her audition, she blew us away. It usually takes a few weeks of rehearsal for actors to master the physicality of our roles, but she walked in already able to execute the hardest choreography - and the headstand! So we've been able to focus her rehearsal time on the nuances of her multiple characters - and the process of transitioning among them,"

Speaking of MTC
Broadway World also reports that Miami Theater Center has announced that they will be opening the world premiére of Christina Alexander's Hate! An American Love Story on February 8, 2013.

Alexander's edgy work delves into stories of love in America and the country's struggle to understand that different doesn't mean wrong. One actor - Ms. Alexander - plays eight characters who deliver 16 monologues in a multimedia work that offers varied perspectives of who and what define love in America.

Ms. Alexander is a Miami native and a graduate of New World School of the Arts, and holds degrees from UM and Barry University.

Speaking of Local Graduates
Playbill reports that FAU alumnus Marc Kudisch has been cast in the Yale Repertory Theatre production of Hamlet.  No, he's not playing the title role.  Paul Giamatti has been inexplicably cast in that role.  We're not saying that it's a bad thing, just that it's inexplicable.  After all, when one says "Hamlet" one's first thought is rarely of a pudgy, balding, middle-aged man.

More Upcoming Productions
BlackNews.com fills us in on The Amen Corner, opening next month at the African American Performing Arts Community Theatre (AAPACT).

Now for Something Completely Different
miamiartzine talks with the inimitable Mario Betto.

It’s hard to say which particular field Mario excels in most, because so far, he has achieved success in just about everything he puts his mind and hand to. His musical, Combing Through Life’s Tangles, about a transgender hairstylist, has been performed in professional theatres since 2006, and received rave reviews. Mario is also an officer of the Theatre League of South Florida, the current Chair of The Cosmetology Advisory Board at Sheridan Technical, and the founder of Hairstylists for Humanity, an organization that raises money for homeless shelters, abused women, cancer patients and hospices for people living with HIV/AIDS. And not least of all, Mario is currently a full time student at FIU.

One slight clarification; Mario stepped down as secretary of the South Florida Theatre League due to all the challenges he's taken on, and now serves on its Advisory Board.
Posted by C.L.J.