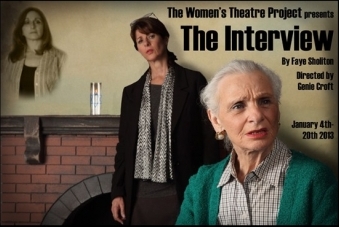 The Women's Theatre Project opened its second production of The Interview on January 4, 2013.


Faye Sholiton's deeply moving memory play about the legacy of human suffering, courage and humanity, mothers and daughters, and forgiving and being forgiven, The Interview is at once a powerful documentation of a horrific historical event and one artist's deeply felt response to it. Written with clarity and feeling, it resonates on all levels. Sholiton drew inspiration for her play from her real-life experiences as a long-standing journalist and interviewer of Holocaust survivors.


As solid as the first production was, this edition is a significantly deeper, more moving rendition elevated by acting that has only become richer with time. Along with the company’s Eclipsed and Speaking Elephant, this likely stands among the company’s finest offerings.

And for the fourth time in 16 months, Harriet Oser gives a master class in performing...

Gardner has the less showy role for much of the play...  But Gardner quietly, subtly lays emotional groundwork for what’s to come. When Sholiton allows Ann’s angst and guilt and issues to rise steadily like a column of lava in a volcano, Gardner’s outpourings are completely believable.

Adjan also does a fine job of communicating Rivka’s warring feelings for her mother, not just the underlying love, but her clear eyed need to put some distance between her and burden that Bracha has inflicted.

...credit Artistic Director Croft with some measure of the three women’s triumph here. Croft does not allow a shred of whining or self-pity to infect anyone’s performance. While she allows the actresses to take pauses and let the piece breathe when necessary, The Interview never feels like its lagging.

Doubtless being Jewish and/or having a familial connection to the Holocaust triples the impact for some audiences, but anyone who has struggled with profound family baggage will plug into its themes.... Even if you saw it four years ago, this heart-rending rendition is worth a second visit.


The Women’s Theatre Project first staged Faye Sholiton’s The Interview in its former Fort Lauderdale home in 2009. The company is now producing work at the Willow Theatre in Boca Raton’s Sugar Sand Park, and for its second offering, it’s revisiting The Interview. The cast’s three key women are the same, and Genie Croft again directs.

There are, however, differences. Sholiton did some work on her script after that first production. The small role of a teen videographer is now being played by a guy (Christopher Scott Mitchell), the company having relaxed its all-female-cast policy. And designer Sean McClelland’s new set – of necessity much larger, more detailed and more thematically resonant – serves the play far better.

Oser covers the greatest emotional terrain in portraying a damaged woman confronting her truths and flaws. Gardner and Adjan contribute their own fireworks as daughters whose lives have been shaped by their mothers’ terrible pain.

If the play works better this time around (and it does), McClelland deserves some of the credit. He supplies a place for Rifka to live in Bracha’s imagination, a neatly kept living room where the elderly woman’s memories unfold, and doorways topped by words that serve as a nightmarish reminder of Auschwitz: Arbeit Macht Frei (“Work makes you free”). Particularly for any survivors or their relatives, that visual will be, like Bracha’s memories, a reminder of the unfathomable.

Mary Damiano reviewed for her blog:


The Women’s Theatre Project produced The Interview a few years ago, with Oser, Gardner and Adjan.  Then, the company only produced plays by women playwrights with all female casts, so Sholiton rewrote the last scene and changed the gender of a character.  This production includes the original scene, which adds more resonance to the play.

Oser is excellent as Bracha, conveying her steely will, her anger and her vulnerability with just the right mix of power and poignancy.  Gardner and Adjan do well in their supporting roles, but this is Bracha’s story and Oser’s show all the way. Sean McClelland evokes the memory aspect of the story with his inventive set design.


The Women's Theatre Project presents Faye Sholiton's The Interview at the Willow Theater through January 20, 2013.
Posted by C.L.J.