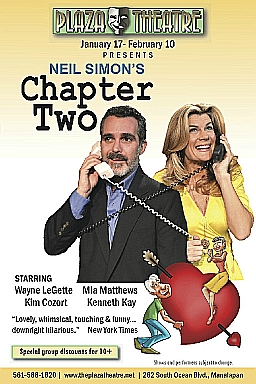 The Plaza Theatre opened its production of Neil Simon's Chapter Two on January 8, 2013.


Recent widower George Schneider is encouraged by his younger brother Leo to start dating again. This sends George into even more depression after a series of bad matches. Then Leo introduces George to Jennie Malone and she’s a keeper. Still, it’s a bumpy trip on the road to Dreamland for these not-so-young lovers. George and Jennie stumble on, overcoming both their hesitation on the rebound and emotional neediness. In a subplot, Leo has a fling with Faye, Jennie’s neurotic married friend. The plot is loosely based on Neil Simon’s marriage to Marsha Mason.


...director Michael Leeds and his sharp four-person cast keep the pendulum swinging, from sorrow to silliness, from the surge of love to the complexities of unfinished emotional business.

LeGette and Matthews have plenty of funny lines and handle them well, but theirs is the more serious play: a cute “accidental” meeting over the phone, a head-over-heels romance, an o’er hasty marriage and a painful reality check. The actors have a believable chemistry, and late in the play, LeGette fully commits to George’s startling, unsettling cruelty.

Kay and Cozort, husband and wife in real life, supply the laughs that are early-vintage Simon’s stock in trade. Inevitably, Leo and Faye have an assignation, and the actors’ way with farce pleasurably squeezes every last laugh out of that scene.

With each production, the theater is raising its game, and so it is with the Chapter Two team -- director Leeds, the actors, set designer Michael McClain, lighting designer Glen Rovinelli and costume designer Jerry Sturdefant. Chapter Two isn’t in the first tier of Simon’s many plays, but at the Plaza, it is getting a solidly entertaining production.


Director Michael Leeds and a solid cast at the Plaza Theatre in Manalapan have mastered Neil Simon’s challenging meld of witty comedy and throat-choking heartache, and make both perfectly plausible facets of life.

George (the note perfect Wayne LeGette) is a novelist not coping very well with paralyzing grief over the death of his wife... His brother Leo (the always dependable Kenneth Kay) is a theater publicist who has been trying to jumpstart George’s life with blind dates.

Although deeply wounded, neither LeGette nor Matthews’ characters  ever exude a shred of self-pity. Both actors create human beings struggling to get through another day. They make a convincing couple with more than enough chemistry to make their whirlwind courtship absolutely plausible. They both handle the comic lines with classic Simon timing, but they also dive fearlessly into the fear that sometimes keeps people from reaching out for love.

Chapter Two also says something about the Plaza Theatre. Producer Alan Jacobson’s undertaking seemed to carry a whiff of second-rate theater early on because it started out producing low-budget musical revues of varying quality and because it occupied the space where Florida Stage had mounted some of the best theater in the state. But it’s time to acknowledge that...with... full production values, proven directors and top-drawer casts, the Plaza has earned some respect. Yes, all these works have a name recognition factor to lure an older audience, but Jacobson has chosen darn good scripts and is insisting on executing them well.

Chapter Two plays at the Plaza Theatre through February 10, 2013.  Just a reminder that the bridge is out in Lantana, so you'll need to cross the Intracoastal Waterway by Lake Road on the north or Boynton Beach Blvd. or Woolbright Road on the south, it's a lovely drive up scenic A1A.
Posted by C.L.J.