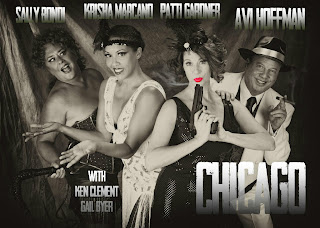 The Boca Raton Theatre Guild opened its production of Chicago at the Willow Theater on March 1, 2013.


ALL THAT JAZZ! The classic musical comedy featuring merry murderesses, flamboyant flappers and crooked lawyers set in the vaudeville era.


The Boca Raton Theatre Guild has just opened its production of the revival-edition Chicago, which is in the hybrid style of a dance-heavy concert with simply staged scenes. Director Keith Garsson, choreographer Ron Hutchins and musical director Eric Alsford all play key roles in the look, flow and sound of the show... The result is entertaining, but it’s also as uneven as the production’s sound levels.

Krisha Marcano, who created the role of Squeak in The Color Purple on Broadway, is a luminous Velma Kelly... Marcano’s rich voice does justice (and then some) to All That Jazz, My Own Best Friend, I Know a Girl and Nowadays, and she nails Hutchins’ Fosse-style choreography like no one else in the cast -- no surprise, since she appeared in the national tour of Fosse.

As Roxie Hart, Patti Gardner is more perky than foxy, but the choice works. She’s all wide-eyed faux innocence, funny and ruthless as she swipes Velma’s best courtroom moves and repeatedly exploits the gullibility of her sad-sack hubby Amos (Ken Clement, who’s terrific and in fine voice as Roxie’s patsy).

Sally Bondi brings strength and humor to the conniving prison matron, Mama Morton, and her duet with Marcano on the comically offensive Class is one of the production’s indisputable vocal highlights. Another standout is “announcer” Matthew Korinko, who brings just the right tone of bemused irony to his scene-bridging narration. Too bad he doesn’t have more to do in the show.

The chorus performers aren’t the 3-D centerfolds that audiences at the Broadway revival are used to seeing, but they sing and move well, even if some don’t come close to those Fosse moves that Marcano does so very well.


...the Guild has brought together some of the best talent in the region, cast in roles they were born to play.... You can’t ask for better. Under Keith Garsson’s direction, these folks are incapable of a bad performance, so a lot of audience members left opening night feeling entertained.

But the cold truth is there is a much better show possible. So much is missing, starting with the razor sharp tang of cynicism, the jangling frisson of razzamatazz and the anarchic thumb-nosing of unbridled sex. Instead, we get a competently executed edition of low-key musical theater. These people are working hard, but there’s a scene in which Bondi tries twice – and fails – to crack a bullwhip. That’s an apt metaphor for the whole show.

The Guild production has several virtues, especially Hutchins’ choreography,  which melds his own vision and steps with Fosse’s carnally-drenched hip-popping finger-snapping style...  This is best seen in the delightfully morbid "Cellblock Tango" featuring accused murderesses explaining why they killed a spouse or lover. Hutchins’ moves provide a physical analog for the song’s theme “Yeah, I shot the bastard. So what?”

Gardner has proven repeatedly that she has terrific musical theater chops in every department and Roxie has been a role on her bucket list. But she has been fighting off a cold this week and while she is giving this everything she has, the cold is clearly curtailing what we’ve seen her do before. Still, she scores with her numbers “Roxie” and “Me And My Baby.”

Marcano is just as talented as a vocalist with a lovely cool sound, but she too seems to take several scenes to get into the role.

Bondi devours the role as the opportunistic prison matron and starts off her big number “When You’re Good To Mama” with the zest and belt that most of the show lacks. But she loses steam about two-thirds of the way through.

The only person who nails his role is Clement as the cuckolded sap who we’d feel sorry for in the ultimate sad sack softshoe “Mr.  Cellophane” if it wasn’t that the authors don’t want us to feel sorry for anyone.

A shout out is due to Matthew Korinko as the smarmy announcer/emcee and Sharyn Peoples as the gossip mongering sob sister reporter. Also kudos to the ensemble of dancer/singers...

There’s little actually wrong with this production. Everyone from Gardner to Hoffman to Hutchins are too good to let that happen. But when the cast sings, “give ‘em the ol’ razzle-dazzle,” you may be wishing they would.

The Boca Raton Theatre Guild presents Chicago at the Willow Theater in Sugar Sands Park through March 17, 2013.
Posted by C.L.J.