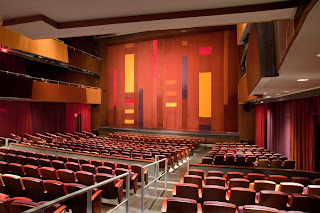 Today's "dark" theater is the South Miami-Dade Cultural Arts Center, which completely  sold-out the single performance of the national tour of A Chorus Line on Sunday.  It's run by the Miami-Dade County Department of Cultural Affairs, which explains why it has a long and complicated name that doesn't turn into an acronym or something.  I guess we can call it "Smedcack" for short, until they come up with something less unwieldy.

If you go to the "about us" section, you learn about the high-brow design, and the story between the "two sculptures" that look like someone cleaved the great-grandaddy of all Pet Rocks in half, but you won't learn how many seats are in any of the performance spaces in the building, or what its overall artistic mission is.  But it's sure bright and colorful.  And while we might tease them a bit, the fact is that they've been providing remarkably diverse programming for the residents of the far end of metro South Florida, who have been attending the Center in droves.  Even if they have the ugliest Main Rag in all of South Florida.

Not So Dark
Broadway World reports that Jan McArt's next entry in her play reading series is tonight.  You can catcher her in Champagne and Bosom Buddies - A Salute to Jerry Herman at Lynn University's Wold Performing Arts Center tonight at 7:30 pm.

Bigger and Better
BrowardNetOnline reports that the Broward Cultural Division has expanded its Arts Teacher of the Year program.


For 27 years the Broward County Arts Teacher of the Year Program has showcased the artistic excellence of students and faculty in  Broward County schools, by honoring one outstanding arts teacher each year for his/her contribution and dedication to arts in the classroom. This year, they will be honoring FOUR teachers and FOUR artistic disciplines AND this is also the first year that private schools have been invited to apply.

It's a great program, and we're glad to see it expanded to give more coverage.

MTC And The Golden Egg
The Drama Queen fills us in on Miami Children's Theater and its new summer camp at The Colony Theater on Lincoln Road.  Oh, and The Carbonell Awards!


The 37th annual Carbonell Awards, a.k.a. South Florida's "theater prom," are set for Monday, April 1 at 7:30 p.m. in the Amaturo Theater at the Broward Center for the Performing Arts.


Read more here: http://miamiherald.typepad.com/drama_queen/2013/03/kids-and-the-colonyand-the-carbonells.html#storylink=cpy
We hope to see you there.  Tuxes and/or evening gowns are optional; clothes, however, are not.

Success Story
Broadway World reports that Palm Beach Dramaworks raised over $18,000 for The Actors' Fund during their run of A Raisin In The Sun.  The fund has been serving the essential needs of artists since 1882. The critically acclaimed theater company will be raising money for its own needs at its annual gala this Friday, March 22nd.

Opening Tomorrow
The Miami Herald fills us in on Fela! opening tomorrow at the Adrienne Arsht Center for the Performing Arts.

Just Over The Horizon
Florida Theater On Stage brings us up to date on New Theatre's Boomfrog series, and free readings coming up at FIU New Plays Festival.  And Playbill fills us in on Bare, The Musical, opening at the Broward Center for the Performing Arts in a couple of weeks.

Meanwhile....
In Coconut Grove, the Coconut Grove Playhouse is still closed.  But The Coconut Grove Grapevine reveals Plan F; Florida International University suddenly wants to get involved.  The Miami Herald describes the 13 page proposal as "not yet full fleshed out."  It quotes Michael Spring, the county’s director of cultural affairs,as saying "It's not a deal; it's an idea."

We will caution everyone once again with the warning that there is only $20 million put aside for the Playhouse, and that isn't even enough to simply make the building safe to be in, given its current condition; the entire south wall is being held up by jacks. You might have noticed them cleverly concealed behind the unsightly plywood structure running along that side of the building.

In Palm Beach, The Shiny Sheet reports that Sterling Palm Beach has a signed letter of intent to lease the Royal Poinciana Playhouse to the National Arts Institute.


“We are enthusiastic about the prospect of bringing the performing arts back to the Royal Poinciana Playhouse,” said Chief Operating Officer Gregory Moross, who represented Sterling at the meeting. “It was a pleasure working with the prospective tenants, and we look forward to a long and successful relationship.”

Does anyone have any details on the mystery party that reportedly bought the Hollywood Playhouse with the intention of doing plays there?
Posted by C.L.J.