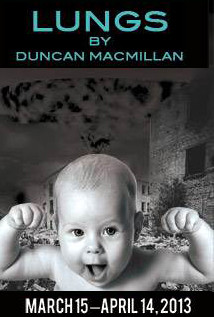 The Theatre at Arts Garage opened its production of Duncan MacMillan's award-winning Lungs on March 15, 2013.


The clock is ticking! What’s it going to be, the baby or the bomb?  Lungs tells the story of a couple contemplating having a child in a world of global anxiety and political unrest. If they over think it, they’ll never do it. But if they rush, it could be a disaster. What will be the first to destruct – the planet or the relationship?

The Palm Beach ArtsPaper published their interview with MacMillan just before the show opened.

You've heard of theater in the round? Lungs is theater in the raw. Popular among adventurous, budget-conscious regional theaters, Duncan Macmillan's renegade dramedy features just two people on a bare stage, acting for 90 minutes. No set, no props, no pantomiming, no costume changes, no sound cues, no breaks... no theatrical crutches. The actors are fully clothed but emotionally naked. It makes Our Town look like Joseph & the Amazing Technicolor Dreamcoat.

Graver, Burgess, and director Lou Tyrell should be applauded for even attempting something so ambitious... When the actors meet the show's challenges, Lungs is as riveting as Macmillan's intent, and both of them handle the tough and jolting transitions through space and time with grace. There is no stage direction in the script, yet Tyrell keeps the action fluid, his directorial hand invisible (though it must be noted that Tyrell's almost imperceptible lighting cues, employed against the playwright's wishes, provide atmospheric support.

The problem is, with no onstage bells and whistles, the actors have to be unusually exceptional, because these are warts-and-all performances. And Graver manages to capture an endearing tone for her character only occasionally. Too often, she sounds abrasive. When she's saddled with the show's longest monologue, a virtually uninterrupted 786-word ramble, the result is exasperating and labored...

Burgess fares better, and you can sense the spark of inspiration in his eyes even when he's given nothing to say for extended stretches of the show — which is often. But he seems to be acting in a different play, resulting in a rough chemical imbalance. Graver's Woman is untethered so extremely from Burgess' perpetually grounded Man that it's a miracle they can ever get through a conversation, let alone an intimate evening or a night in the sack.

By the end, though, Macmillan has sunken his ship all by himself. Lungs follows a bell-curve trajectory of quality, ascending in depth and intelligence toward a perfect narrative apotheosis, the action of which I will not spoil. But after this key moment, it begins a slow and excruciating plunge of head-shaking plot twists and inelegant dialogue... If ever there were a modern play in desperate need of an editor, it's this one, to the extent that it begins to feel like we're watching a workshop draft prior to its inevitable trim.

The ability of Burgess, Graver and Tyrell to make such convoluted verbosity on the page sound on stage as effortless and smooth as a flowing fire hydrant is nothing short of miraculous.

One of the joys is watching Tyrrell’s staging. With only the subtlest of lighting changes (which Macmillan discouraged) Tyrrell has his actors convey the passage of time — minutes, months, even decades — simply by slight inflections in speech or changing body language.

Burgess deftly creates a deeply anxious man trying hard to be supportive of this wonderful creature, but who in fact does not quite know how and knows he doesn’t. Graver makes credible rather than laughable Eve’s concern for the world situation. She creates a woman who is a tiny bit goofy, but who is also unassailably genuine in her emotions. You can almost see feelings play on the outside of her skin like electrical arcs. Anyone who knows how theater is made will know that Tyrrell deserves significant credit for their performances, the pacing and the plumbing of the script for meaning.


Lungs is theater at its most stripped down and simple: two actors on a barren stage, no props, no costume changes, artful lighting and sound. But as the new production of Lungs by the Theatre at Arts Garage so vividly demonstrates, a minimalist production of a gloriously acted, astutely directed play trumps many a big Broadway hit for emotional impact.

Tyrrell, Graver and Burgess deliver Lungs with absolute, impressive clarity. Shifts in place, time or action are accomplished with changes in the actors’ positions onstage, alterations in vocal tone or looks that speak volumes, as when the two communicate sexual satisfaction after an impulsive romp in a public place.

Graver and Burgess, both nominees for the upcoming Carbonell Awards, do some of their finest work in Lungs. Theirs is a journey of hairpin emotional turns, highs and lows, and it requires a believable bond between the two, an intense connection these excellent actors convincingly deliver. Mapped out by Macmillan, guided and shaped by Tyrrell, the resonant and relatable journey through life in Lungs is a moving, intense and thought-provoking ride.