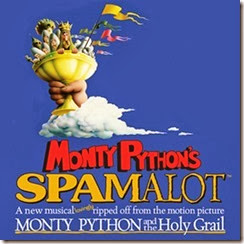 Winner of the 2005 Tony Award for Best Musical, Monty Python’s SPAMALOT, the musical comedy sensation lovingly ripped off from the film classic “Monty Python and The Holy Grail,” now returns to spread laughter and cheer throughout the Kingdom of South Florida. Telling the tale of King Arthur and his Knights of the Round Table, and featuring a bevy of beautiful show girls, not to mention cows, killer rabbits, and French people, Monty Python's SPAMALOT "raises silliness to an art form" (The Sunday Times) and has been hailed as "a no-holds-barred smash hit" (The New Yorker).

A delightfully demented cast enhanced by the inventive imagination of chief jester/director David Arisco and choreographer Ron Hutchins make this a satisfying pleasure even on its fourth or fifth visit to South Florida.

Economics have forced Actors’ Playhouse to cut back to one blowout musical a year, but they have chosen unerringly in recent years what properties to put their resources into...  The result is a production that feels as if no expense was spared.  There’s a moment near the end of the production number “The Knights of the Round Table,” which sports a Las Vegas-style finale when a cast of 20 are dancing shoulder to shoulder from one end of the proscenium to the other, garbed in Ellis Tillman’s hilarious array with smiles beaming like floodlights and warbling to the full-bodied sound of a live eight-piece band.  The only adjective is glorious.

Amping up the feeling of the originality is the work by Hutchins... Even when some bits are dictated by the script… Hutchins brings his own stamp and plié while joyously embracing every Broadway chorus line move and adding daffy runs at tap dancing knights, disco infernos, an arty pas de deux between a friar and a nun, even a bit of Michael Jackson’s “Thriller.”

Four-time Carbonell winner Gary Marachek… is completely wrong visually as the majestic King of the Britons and therefore dead perfect for this show... When he stands legs spread apart, fists at his waist like a risible Colossus of Rhodes, his eyes have that demented gleam of fatuous pride in unearned Divine Right, topped by a broad grin of self-satisfaction and sometimes topping it with an arching right eyebrow.

He is matched by Lindsey Forgey as The Lady of the Lake (leading her Laker girls)... With a statuesque figure, a Mermanesque belter’s voice and a daffy mien, she has a theater comedienne’s chops.

The other six “leads” are mostly members of Arthur’s Round Table, but each play three to five parts and it is a pleasure to see actors better known for straight roles allowed to indulge their uninhibited comic side… Paul Louis… couldn’t be bettered for exuding the woebegone aura as well as nailing the faux English music hall ditty “Always Look On The Bright Side Of Life”... The sturdy Jim Ballard… is the muscular Lancelot with a hidden feminine side... Shane Tanner has the proverbial field day as the politically-inclined peasant and later noble knight Galahad, the soon to be limbless Black Knight and the Visigoth-ish father of Prince Herbert.

For all its fun, the show is a technical nightmare awash in elements such as animated projections and copious sound cues, so some credit goes as well to Production Stage Manager Carl Waisanen, Production Manager Carlos Correa and Assistant Stage Manager Josh Dobarganes who probably aged a few years on this show.

Winner of the 2005 Tony Award as best musical, Spamalot is the spring’s big-deal production from Actors’ Playhouse in Coral Gables. And in terms of the talent onstage, the goofy amalgam of Arthurian legend, musical theater and the Python sensibility delivers as promised.

Director David Arisco has elicited strong, comedically deft performances from his 20-person cast, a company in which six of the eight principal actors play multiple roles. Choreographer Ron Hutchins contributes splashy, witty dance numbers that are perfectly in the spirit of the show. Musical director David Nagy leads a small but effective band. And costume designer Ellis Tillman, working with Costume World Theatrical, has come up with a vast array of outfits that are as amusing as the performers wearing them.

Forever bemused, Marachek is a precisely calibrated Arthur, funny in word, movement and song without going over the top.

Orbiting Arthur and his knights are Paul Louis as the king’s loyal, under-appreciated and aptly named servant Patsy; Jose Luaces, a spark plug of a performer… and Lindsey Forgey as the amusing, plot-driving diva known as the Lady of the Lake.

David Arisco, Actors’ Playhouse artistic director, has a terrific sense of humor and it’s evident in his casting and directing of Spamalot. Lindsey Forgey as The Lady of the Lake? Brilliant. She could laugh the pants off a one legged funeral director. Jose Luaces as Historian, Not Dead Fred, French Guard, Minstrel and Price Herbert? I’m still laughing. And check out his flailing dance moves. Paul Louis as Mayor, Patsy and Guard 2? The subservient servant who casually steals the joint blind. Gabriel Zenone as Sir Robin, Guard 1, Brother Maynard? Perfectly cast and charmingly cowardly. Shane Tanner as Sir Dennis Galahad, The Black Knight, Prince Herbert’s Father? He and Lindsey Forgey singing The Song That Goes Like This are the stuff of musical comedy. Jim Ballard as Sir Lancelot, the French Taunter, Knight of Ni, Tim the Enchanter and Wayne LeGette as Dennis’s Mother, Sir Bedevere the Strangely Flatulent, Concord? These two win awards just by walking on stage. Gary Marachek as King Arthur? A nice voice but tends to play the house and broke up mid scene.