The M Ensemble: Brothers of the Dust (reviews) 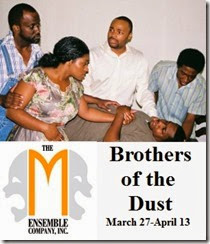 The M Ensemble opened its production of Brothers of the Dust at The Light Box at Goldman Warehouse on March 27, 2014.

This play by Darren Canady won the Osborn Award two years ago from the American Theatre Critics Association competition. Brothers of the Dust looks at a farm family in 1958 Arkansas: the brother who stayed to work the land and is discouraging his son from attending college, the wastrel whose entrepreneurial dreams imploded, and the poet pursuing a writing career in Chicago. As secrets emerge, the potential for discovery of oil on the family homestead pits each against the other in a clash of values.

The production and performances veer from fiery and moving to occasional stretches in which it all goes stiff and stilted. But nothing can dim the consistent underlying glow of the script by young playwright Darren Canady whose vision and voice are unusually promising.

Artistic Director André L. Gainey has guided the cast in finding and illuminating the complex characters as they push and pull in a family dynamic both extreme and familiar from a hundred plays from Eugene O’Neill to Sam Shepard.

As Roy, Keith C. Wade has the toughest assignment. The character must be stolid, dictatorial and yet sympathetic. Canady has created someone who has difficulty expressing his deep love of family. Because Roy keeps so much inside, Wade struggles a bit making us see the real Roy. But when he gets the chance to let loose with anger, Wade’s performance suddenly comes unleashed. After that, his shell-shocked shut-down reaction to tragedies not only makes sense, but seems plausible.

Darryl Vaughn’s performance, too, can seem a bit perfunctory and stiff at times. But when he finds Wilson’s groove, Vaughn perfectly communicates someone whose disappointment enables the most self-serving pragmatism.

Mcley LaFrance is consistently effective showing the conflicting turmoil of the genial would-be sophisticate Ollie whose evolving success as a writer in Chicago is imploding. He and Vaughn both illustrate the frustration of people who have achieved their goal of “getting out” and yet whose dreams have turned to dross. Early on, LaFrance exclaims the word, “Family” with mixture of joy and exasperation familiar to most of us.

The most impressive work comes from Charita Coleman who creates Mayetta as the foundation upon which the family operates… While she must keep her emotions in check to some degree for much of the play, her outbursts like the one at the very end of the play when she pleads for Roy’s understanding are among the most moving moments of the evening.

The supporting cast is pretty capable as well: Ashlee Thomas as the fish-out-of-water sophisticate Audra who just barely hides her disdain for the alien rural environs; Roderick Randle as the teenaged Jack straining to leave the farm for college against his father’s commands, and Brandiss Seward savoring the prime role as the tart-tongued out-for-herself Nella who gets some of the best lines…

These have been complicated times for M Ensemble, the oldest continuously operating African American company in the state… But at the same time, Brothers of the Dust and the recent Knock Me A Kiss and King Hedley II indicate how the quality of the work has trending upward. In any event, they are providing an opportunity that audiences should take to hear this new voice in playwriting.

M Ensemble and director André L. Gainey have just opened a fine, wonderfully acted production of Brothers of the Dust at the Light Box at Goldman Warehouse. Miami’s oldest theater company isn’t always qualitatively consistent, but this show is a gem that gets folks in the audience oohing and hooting.

Darren Canady, a gifted young playwright who teaches at the University of Kansas, won the 2012 Osborn New Play Award for Brothers of the Dust, a rich and searing drama set in 1958 rural Arkansas. Earthy and observant, the play isn’t a masterwork, but it is an engaging, sometimes amusing, ultimately powerful piece about the disintegration of an extended black family.

Beyond the resonant script, M Ensemble’s Brothers of the Dust really connects because of the excellent ensemble work of its cast.

Wade’s Roy is a hard, stubborn man for whom it’s tough to summon sympathy, but in the waning moments of the play, he breaks your heart. Coleman’s guarded exterior masks Mayetta’s loneliness, but she’s no doormat: In her own way, she’s as tough as Roy. Vaughn gets Wilson’s manipulative ruthlessness, and Seward is his more amusing match. Her delivery is pricelessly withering as she surveys the summer dress worn by Ollie’s sometime girlfriend and comments, “That is so … creative.”

The M Ensemble presents  Brothers of the Dust at The Light Box at Goldman Warehouse through April 13, 2014.