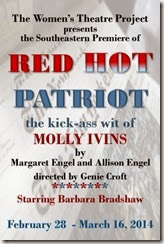 The Women’s Theatre Project opened the Southeastern Premiere of RED HOT PATRIOT - the kick-ass wit of MOLLY IVINS on February 28, 2014.

The story of the unsinkable Molly Ivins, the famously brassy newspaper columnist and best-selling author.  A true Texas original, Ivins was a crusading journalist who broke gender barriers with her sharp-turned wit, humor, and wisdom to establish herself as one of the nation's most influential political columnist.  Written by: Margaret Engel and Allison Engel

There are more than a few reasons to see The Women’s Theatre Project’s Red Hot Patriot — first among them is four-time Carbonell Award-winner and local actress Barbara Bradshaw as she holds court for 68 minutes in a one-woman show about Texas journalist Molly Ivins. Secondly is to see Genie Croft’s brilliant direction.

There are so many strong links that hold this production together, but the least inviting is Margaret Engel and Allison Engel’s cobbled together script. The twin sisters, both with journalism backgrounds, had never written a play before they tackled Ivins’ life story to turn it into a biographical play.

…it’s Bradshaw and Croft’s tooling that puts the kick in Ivins’ wit since theatrically the Engels’ sisters’ monologue doesn’t quite hang together. Its flaw is its choppy transparency due to its dependence on the source material. It pulls from the writer’s columns, speeches and interviews (some of which live on You Tube). The script, while efficient as a consumer magazine article, is constructed more like a journalist’s play-by-play than a from-the-heart account of a storied career…

But spending time with Bradshaw is worth every minute – she curls her lips around each word, looks her audience square in the eye, takes beautiful pauses as she passes between memory and current conversation. She is the firebreathing Molly in ever fiber of her being. She even adds a layer of desperation to a script that doesn’t come through with words to match the anxiety.  There are so many delectable choices given to the audience as gifts from Bradshaw and, in part, through Croft’s impeccable direction.

There's an unavoidable flaw in the one-woman show Red Hot Patriot: The Kick-Ass Wit of Molly Ivins, and that's the fact that it's not written by Ivins herself. The liberal Texas firebrand, whose syndicated columns had run in 400 newspapers by the time she lost her battle with breast cancer in 2007, had a singular style that merged sophisticated political analysis with piss 'n' vinegar. Anyone who puts words into Ivins' mouth that weren't conceived by Ivins' brain can only imitate the inimitable.

Such is the case with twin sisters Margaret and Allison Engel, the journalists and Ivins devotees whose Red Hot Patriot is a first effort for the stage…

Bradshaw, donning denim togs, red boots, and a curly wig… looks the part of Ivins more than she necessarily sounds it, which in this case is a good thing. She doesn't get hung up on affecting her character's Texas drawl, the way Kathleen Turner did, to scenery-chewing effect, in the play's Philadelphia premiere; as a result, the lines here land with a more efficient impact.

…Bradshaw captures Ivins' spirit, her spunk, and her political worldview. She becomes animated with outrage when discussing civil rights (or lack thereof), the horrors of the Vietnam War, and the stripping of our liberties, and you get the impression it's Bradshaw, as much as Ivins, vocalizing these opinions. I wanted a bit more of this; Genie Croft's direction keeps the play moving at such an even keel that a few additional emotional spikes would serve it well.