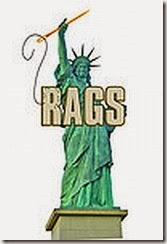 The Plaza Theatre opened its production of Rags on February 20, 2014.

With great passion and humor, the story is told of Rebecca, a naive Russian immigrant arriving at Ellis Island with her young son, and their struggle to make a life for themselves in the New World. A stirring musical about immigration with a book by Joseph Stein and music by Charles Strouse. This saga, of strength and love, of greed and power, is a deeply moving and inspirational story.

The Plaza Theatre deserves applause for taking the flawed but musically delectable Rags a step closer to the powerful show it could be.

Even though the Plaza’s 15-member cast is about half that of the short-lived 1986 Broadway production, it’s far too large for the Plaza’s small thrust stage, which is made even more crowded by the clunky timbered set.

Melissa Boher Jacobson, who plays Rebecca, is a competent actress who engages our sympathy for the character. But her singing falls short of the mark, particularly during the crescendos, when her voice acquires an irritating shrillness and vibrato.

Sheira Feuerstein, as Rebecca’s friend Bella, fires Rags with the requisite anger but burns away a pleasing sound in the process.  The best voices belong to Randy Charleville, who plays Rebecca’s toadying husband Nathan, and James Cichewicz, who portrays union organizer Saul.

This production is far from perfect. It’s much like the show itself, a heartfelt attempt whose reach exceeds its grasp.

Give a round of applause to a theater that takes on a challenge, especially with its fan base of South Florida audiences who are notoriously suspect of anything that isn’t a Rodgers and Hammerstein musical.
The good news is, it is wonderful to see creativity in approaching a work that isn’t usually staged; the bad news is, when it doesn’t come together, all of the inventiveness is lost.

The Plaza Theatre’s production not only carries the baggage of a book that gets caught up in some of the most clichéd characterizations of immigrants to Ellis Island, but the directing and staging itself has its share of missteps. Some of the problems include a cast that ranges from professional caliber to amateur theater talent, which all adds up to a less-than-polished feel.

Andy Rogow’s direction didn’t add any cohesion and musical numbers seemed less than smooth, especially when a large group was required to be on stage at one time. Kevin Black’s choreography looked challenged on the small Plaza stage, which had overly large set pieces… by the usually spot on Michael McClain.
Stand outs in the cast were Bramble as Avram, the ever reliable Mike Westrich as wide-eyed Ben, Byer who was delightful in her spotlight song, Three Sunny Rooms, and Sheira Feuerstein who brought a strength to the thinly drawn role of Bella.
Cichewicz possessed a great voice, but his characterization of Saul remained on one level – headstrong and arrogant. Boher Jacobson as Rebecca fell into the same trap of not finding a requisite range of softness.

A big embrace to the Plaza and Alan Jacobson for the determination to try to make a dreamcoat out of Rags. Unfortunately, it requires a bit more alteration.

That it ran for only four performances after it opened on Broadway in 1986 might suggest there is a little something amiss with Rags… The show has been reworked a couple of times since and now, in another adaptation and with additional musical arrangements, Rags is on stage at Alan Jacobson’s Plaza Theatre. Unfortunately something is still amiss.

Fifteen actors make up the cast including several children and there’s much role doubling with chops ranging from amateurish through community. But watch this kid, he’s going to be a star, and I’m talking about Michael Westrich. As Ben, the bachelor, his acting, singing and moves channel a young Gene Kelly. Charm is the word. It’s a different Rags when Westrich is on stage. A nod also to James Cichewicz as Saul the union organizer, Gail Byer as Rachel the widow and Abigail Perkins as Rosa and Sophie. Melissa Boher Jacobson’s wide experience as a singer adds much to her performance as Rebecca, the show’s lead.


It would be great to announce that the show’s problems have finally been solved and this quasi-sequel to Fiddler on the Roof is now a satisfying evening of theater. Bur regardless of the tinkering and rewriting efforts, Rags remains an overstuffed, unfocused hodge-podge.

There is a way to juggle so many characters and plot threads, but Stein did not manage it and Richard Sabellico’s newer script is not a substantial improvement.

Director Andy Rogow and choreographer Kevin Black do what they can with the large, largely amateur cast, but their efforts are as overambitious as the show itself is. The ethnic story will probably still attract an audience, but what awaits them on the Plaza Theatre stage is strictly rag-tag stuff.


On the whole, the musical about Jewish immigrants in 1914 — from Old World customs and assimilation to sweatshop unions and political enfranchisement — leaves you with a satisfied feeling, even if you are constantly wondering if the show will make it intact through the two hours and 15-minutes with a 15-minute intermission.

That is because the 15 cast members (with three musicians off-stage) have wildly diverse talents and stage experience. Some of them could seriously sweeten their vocals, particularly at the top of their range.

But when they get it right, they really nail it. For example, when Rebecca Hershkowitz (Melissa Boher Jacobson) arrives at Ellis Island with her son David (Eli Jacobson) and faces immediate denial of entry into the country, the tension and desperation is so real you hold your breath.

If you don’t need to hit the refresh button on your knowledge of American history, you can probably guess what Tammany Hall mess is coming, with graft, corruption and police brutality. But don’t think it’s all strife. Plenty of warm humor is embedded in the show, from a sojourn into turn-of-the-century Yiddish theater (a Mel Brooksian version of “Hamlet”) to a nudge-wink-wink flirtation between Avram and a savvy street vendor, Rachel (Gail Byer).

Those moments pave the show with gold.