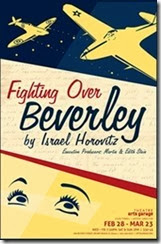 Theater at Arts Garage opened its production of Israel Horovitz’s Fighting Over Beverly on February 28, 2014.

A romantic comedy set in Gloucester, Massachusetts in the winter of 1998, Fighting Over Beverley centers on a love triangle between three 70+-year-olds: Beverley, who came to America from England as a war-bride; Zelly, her fisherman-husband; Archie, the Brit she jilted 53 years earlier, who has returned to take Beverley back. In the battle for Beverley, the real question emerges: What does it take to realize that you are the love of your life?

Entirely well-acted, thoughtfully directed, in a evolved play about past loves we can’t leave behind, Fighting Over Beverley by Israel Horovitz has its way way off Broadway tryout at Theatre at Arts Garage.

It gets its day at Arts Garage with Tyrrell directing the top-notch cast that includes Shipley as Beverley and O’Brien as Zelly who played the roles in the Gloucester production, and in various workshopped readings.

Shipley as Beverley… conveys so many emotions in her words, yet keeps them controlled until Horovitz’s dramatic arc gives her a platform to rise to the occasion. Her delivery possesses subtle gifts throughout that move the action forward to fine crescendo when she has her revelatory moment.

O’Brien plays Zelly so true to character, there’s no doubt this would be the instinct. O’Brien carries an interesting, contained heaviness as many of his secrets begin to be revealed. It’s a superb slow-burn character study.

Creaghan puts just the right spark and vigor into Archie – playing the English visitor on the surface as a congenial, devil-may-care jester, yet he’s plodding, manipulating and ingratiating as he goes balls to the walls to do whatever it takes to claim his prize.

Schmidt… is a worthy choice for the role. She’s able to capture the stubborn arrogance of Zelly with the inherent helplessness of Beverley to create a character who acts as a mirror to the dysfunctional household.

Tyrrell nurtures Horovitz’s dialogue, directing his actors in such a way that the words remain the primary vehicle in which to move the action forward.  It is a subtle shimmer that makes the piece shine… there’s no argument that Fighting over Beverley will continue to ascend. Should it end up on Broadway, Arts Garage audiences will be grateful they were invited to participate in seeing this play develop. It certainly is a theatrical gift.

Love is not reserved only for the young and it is never too late to reach out to the love of your life. Those are among the themes of Israel Horovitz’s latest play, Fighting Over Beverley, but if that sounds like he has succumbed to sentimentality then you do not know this pioneering playwright of the off-Broadway movement

As Cecily, Erin Joy Schmidt is a worthy stand-in for the audience, but the production belongs to Sandra Shipley as Beverley. She underplays the role expertly, particularly in the early going, but comes on strong afterwards as Beverley gains confidence and sees her options widening.

Florida Stage veteran Richard Crowell contributes a crackerbox house set that fits cozily on the Theatre at Arts Garage stage. It has been five years since Horovitz began working with Florida Stage, the precursor of Arts Garage, and three years since the Manalapan company first read Fighting Over Beverley in public. It is a fruitful collaboration of like-minded artists, as this involving, thoughtful play attests.