Busy Weekend on The Scene 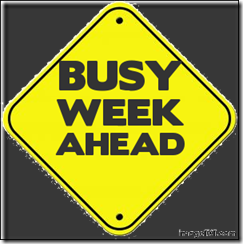 You know that it’s a busy weekend when there are not one, but TWO stories about how much is going on this weekend.
Florida Theater On Stage and The Miami Herald both outline how busy their theatre reviewers are going to be.  And each has a slightly different take on it.


Perhaps producers are racing all at one time to get the last of the snowbirds’ discretionary dollars before they head back north; perhaps they think the geographical distance makes it unlikely their customers will travel to another county; perhaps they simply don’t look at each other’s calendars. No one knows.
-- Florida Theater On Stage

Actually, it’s not that much of a mystery, it’s just that the variables are only visible when you’re putting together the calendar.

First, you want to start a certain distance before or after certain holidays; Labor Day is really a weekend of backyard barbecues and family trips to the beach, and nobody goes out Thanksgiving day.  You won’t have any Jewish patrons during certain high holy days, and you won’t attract any field trips in during F-CAT testing.  Then consider what city functions are going on that may block streets or use up parking.  And now you find that there are clearly defined slots in which to schedule your plays.


The most scrutinized show will certainly be the one from New Theatre, now based at the South Miami-Dade Cultural Arts Center. The script focuses on producer Lorne Michaels’ creation of Saturday Night Live, which launched in 1975, and on its original cast: Gilda Radner, John Belushi, Chevy Chase, Dan Aykroyd, Laraine Newman, Jane Curtin, Garret Morris and, with Chase’s departure, Bill Murray.
--The Miami Herald


So why would THIS play be the most scrutinized?  Is it the subject matter?  Is it New Theatre’s track record producing new plays?

No, it’s the casting of David Samson, president of the Miami Marlins, that makes this project stand out.  Not that those other things don’t count.  But this one will grab the attention of Marlin’s fans in addition to theater lovers.
Posted by C.L.J.