Broward Stage Door Theater opened its production of Bell Book and Candle on May 15, 2015. 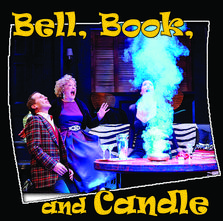 Gillian Holroyd is one of the few modern people who can actually cast spells and perform feats of supernaturalism. She casts a spell over an unattached publisher, Shepherd Henderson, partly to keep him away from a rival and partly because she is attracted to him. He falls head over heels in love with her at once and wants to marry her. Witches, however, unfortunately cannot fall in love, and this minute imperfection leads into a number of difficulties.

In Stage Door Theatre’s new production of Van Druten’s play, Wee Thomas (a black feline whose stage debut was in GableStage’s The Lieutenant of Innishmore) nails every scene as the communicative Pyewacket.

Directed by Carbonell Award winner Michael Leeds, Stage Door’s production is a solid rendition of a period piece that has been entertaining audiences, on and off, for 65 years.

The acting, like the production, is solid. Though Wilder’s lanky Shep isn’t quite the handsome catch Van Druten’s script makes him out to be, he and Herion pretend their instant passion is real, and the stylish Herion is intriguing as a woman who must decide whether a different kind of magic can come from honest love and sacrifice.

Clement artfully plays a scene in which Sidney is downing drinks faster than Nicky can pour them, and he’s amusing as a man who thinks he knows more than he does. Karner and Weakley play their character types — he’s manipulative, she’s pleasantly dotty — quite well.

Broward Stage Door’s quite serviceable but not bewitching production of this 1951 fantasy love story doesn’t feel especially magical in the first act, but it locates the right bag of pixie dust in the second act to show why director Michael Leeds wanted to do the play.

Herion is a charming heroine who exudes intelligence, confidence and a bit of Myrna Loy’s exotic knowing seductiveness. Wilder, while considerably duller with a slight lisp and not much of a leading man aura, is still adequate but not very captivating. But neither have what Novak, Palmer, Harrison or Stewart emitted just by walking in front of you. It’s only when the relationship goes off the rails that the two actors have some dramatic meat to work with. Both then get a chance to exercise some acting chops and the play becomes significantly more enchanting.

Redlitch is solidly in Clement’s comic wheelhouse, Karner is appropriately mischievous and Weakley is the performer most in tune with the classic trope of the piece channeling the idiosyncratic yente ala Elsa Lanchester or Marion Lorne on Bewitched.

Leeds lobbied to have Stage Door do this play. He, indeed, directs it with a feel for that tone that van Druten wanted, a wry meld in which the world of magic plausibly coexists under the surface of elegant cocktail parties where tuxedos and evening gowns are de rigueur. The well-made script is very much a period piece from a time when theater was not so much a $125-a-ticket event as sheer transitory entertainment. But so is Hello, Dolly! and a lot of other shows.

Michael McClain has provided the very image of a classic middle-class Manhattan apartment living room from the period… Ardean Landhuis bathed the apartment in the appropriately spooky lighting when the feats of sorcery occur and Azzy Mora overlay the wry sound effects. Peter Lovello clad everyone in note-perfect costumes of the era…

Side note: Welcome back to the stage the superb actor Wee Thomas as Gillian’s familiar Pyewacket, whose green eyes and hungry grin have been sorely missed since GableStage’s Lieutenant of Inishmore in 2007.

Beware a woman's scorn, especially with her "frenemy."  That particular kind of revenge-best-served-cold dynamic is, more or less, what sparks "Bell, Book and Candle," playing through June 21 at Stage Door Theatre in Margate

…director Michael Leeds, has gotten the gentle tone of the piece just right. It's more of an intimate chamber piece than a full-blast symphonic work. The whole production is in sync with the rhythms and in tune with the wavelength of the Eisenhower years. Keeping everything in proportion, special effects are evoked with well-executed lighting and sound cues that are simple but extraordinarily effective.

Sure, more heat could be coming off Gillian and Shepherd, but that kind of magic either happens or it doesn't.


The production is quaint, harkening back to a time when theatre's purpose was to simply entertain by telling a story with interesting characters in beautiful costumes on a well rendered set. Broward Stage Door's production of "Bell, Book and Candle" proves that this can still be a worthwhile theatrical pursuit.


The actresses in the play fare much better than their male counterparts at holding the audience's attention. Herion as the ingénue, Gillian, is as graceful moving across the stage as she is languishing on the couch. She is believable in all her roles as niece, sister and lover. Weakley, as her aunt, is right at home in this kind of light comedy and brings an added charm to the story. Her girlishness is refreshing and tender.

Karner as the mischievous nephew is best when he is channeling actor Chris Elliott playing Amy's brother, Peter, in the sitcom "Everybody Loves Raymond." Otherwise, he just comes off too snarky for the audience to believe that he is at all concerned for his sister's welfare.

Ken Clement, who was so funny in Stage Door's "Moon over Buffalo"...turns in a less complete characterization than he is capable of delivering. His performance is, however, serviceable.

Less can be said for Wilder as the love interest. He has no chemistry with his leading lady. His intonation is robotic most of the time. Playing only the outer shell of a character, nothing seems to be at stake. Whether he gets the girl or doesn't get the girl really does not seem to matter to Wilder's Shep.

Leeds' careful attention to stage movement shines throughout the show. He positions the actors on the stage to achieve the greatest effect, whether they are jumping up on benches or lounging on the couch. His pacing also works well for this play; it moves like a babbling brook, sometimes splashing quickly over the rocks and then at other times gently rolling downstream.