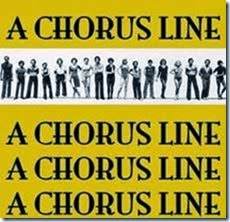 Broward Stage Door opened its production of A Chorus Line on April 8, 2015.

Auditions are underway for a new Broadway musical. For everyone present, it’s the chance of a lifetime. It’s the one opportunity to do what they’ve always dreamed of – to have the chance to dance.
Told through captivating song, riveting drama and stunning choreography, the auditionees describe the events that have shaped their lives and their decisions to become dancers.

Kayley Stevens, playing Cassie  tore an ACL…  Local dancer/teacher/choreographer/actress Nikki Allred Boyd was drafted by phone last Friday and courageously stepped in that night to keep the show open… when I saw the show Wednesday afternoon, she did most of the entire role for the first time. That’s a Herculean effort that deserves some kind of medal. More on her later.

The leaping choreography by Black and Chrissi Ardito intentionally mirrors much of the original by the late Michael Bennett and part-time Fort Lauderdale resident Bob Avian, which is what audiences come to see. But they include nuances such as ensuring that the dancers in the opening number, “I Hope I Get It,” display varying levels of competency in learning and executing steps that ostensibly had just been demonstrated minutes earlier.

…as a director, (Black) has helped his cast wring out most of the humor and sentiment in the script... This is most notable, of course, in the moving monologue of Paul (William Thompson), the dancer whose parents discover that he was working in a drag show. Thompson ensured that throats were tightening throughout the audience.

…Black has managed to get a bit of fresh topspin from most of the actors so their performances don’t feel like a photocopy, such as Shenise Nunez’s Morales singing “Nothing” and leading “What I Did For Love.” When Maggie sings of dancing with her father, Elizabeth Flanagan does something indefinable that snaps hearts in two.

While no one is coasting, a feeling of “once-removed” is present, echoed by the score being provided by digital tracks. (With 22 dancers, it really is too much to expect Stage Door to afford an orchestra, although the orchestrations have some disconcertingly disco guitar licks).

Back to Allred Boyd. She appeared as Vicki… in the Maltz Jupiter Theatre’s production... But she has not played Cassie’s part before (although, another irony, she took an acting and vocal class from its originator Donna McKechnie).  So keeping that in mind, praise is due her work here… she clearly has the talent and craft that promises her performance will deepen as the run continues.

This is not the best or even one of the best editions of A Chorus Line that you will see, but when the distinct individuals subsume themselves into the titular single unit exuding polish and pizzazz, the overall show is not disappointing and it will likely improve over its run. It’s worth a look

A perfectly serviceable production of A Chorus Line is playing through May 17 at Stage Door Theatre in Margate. That may sound a little shady or even like faint praise, but the staging directed and choreographed by Kevin Black does everything it is supposed to. The cast sings the score by Marvin Hamlisch and Edward Kleban with plenty of heart and dances with loads of gusto.  The problem isn't the actors as much as it is the script, which hasn't time-traveled well from 1975.

In a beautifully executed sequence, the musical opens with a stage full of hoofers running through their paces. We see a flash of insight here and there: a haughty dancer slinging a little attitude, a wince of insecurity on another's face.

After a few numbers, in which the cast pulls off the tricky modulation of vocals to match the canned music, the engine of the show kicks in...

From there, it's really just ticking off the hits… Where this staging at times feels contrived and inorganic, things find the right vibe just about halfway through the two, intermission-free hours. A late flourish is better than no flourish at all.

A Chorus Line, doesn’t have dazzling sets, pricey costumes or high-tech special effects. The production… depends on the strength of its story, music and movement to deliver the goods. The version now playing at the Stage Door Theater in Coral Springs does an enviable job of transforming an ordinary dance audition into an entertaining, on-stage catharsis that’s well worth watching.

A Chorus Line works well because a lot of people with a lot of ability have done a lot of work. The tough job of finding performers with song and dance talent sent Stage Door folks to New York as well as locally searching for performers. The effort worked well. Some of the top-notch locals include Bay, who just completed the freaky role of Emcee in Cabaret; Nunez, who took center stage in I Love You, You’re Perfect, Now Change and Tanner, whose acting résumé stretches from here to the Maltz Jupiter Theatre.

Nikki Allred Boyd gives her all to the role of Cassie, particularly in the high-octane song and dance of “The Music and the Mirror.” In this show, she combines life and art.

William Thomason also deserves honors for his portrayal of Paul, whose life was confused by his homosexuality, then shattered when his parents saw him in a drag show. His lengthy monologue is tearfully dramatic.   As Zach, Fiacco is a mysterious figure who talks mainly from the back of the auditorium in a deep, forbidding voice. Michael Wallace plays Frank with lots of gusto and fine dance steps.