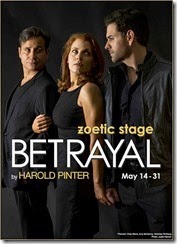 Zoetic Stage opened its production of Harold Pinter’s Betrayal at the Adrienne Arsht Center for the Performing Arts on May 14, 2015.

Sexy, smart and provocative, Betrayal explores the tangled lives of Emma and Jerry, as they engage in a passionate love affair, deceiving their spouses, each other and even themselves. Telling the story in reverse chronological order, Pulitzer Prize-winning Harold Pinter innovatively explores the complexities of love, guilt and duplicity in this award winning masterpiece.

Zoetic, which has won acclaim and a number of Carbonell Awards since it launched at the end of 2010, has had plenty of artistic highs in its relatively brief history. But director Stuart Meltzer’s production of Betrayal, so richly acted by Chaz Mena, Amy McKenna and Nicholas Richberg, belongs at or near the top of Zoetic’s body of work.

Beautifully illuminated with ever-changing hues by lighting designer Rebecca Montero, the set (by Michael McKeever) underscores the essential loneliness and isolation of three people whose lives have been bound together in joy and pain.

McKenna and Richberg expertly navigate their reverse journey from exes to burned-out lovers to a couple ravenous for sex. In the play’s final moments, which reveal the start of the story, he is drunk and ardent, she bemused and reluctant. But one touch establishes a connection that will affect three lives and cause plenty of collateral damage.

Like his fellow actors, Mena employs an impeccable British accent as he crafts one of the best performances of his career. His reserve as Robert is all surface, just another manipulative tool. Mena’s use of simmering anger and aggression, his ability to say one thing while clearly discussing something entirely different, add up to impressively layered work.

Professional productions of Pinter’s plays are rather rare in South Florida, and for those who love drama that’s both intellectually and emotionally engaging, that’s a shame. Zoetic’s Betrayal is a reminder of just how powerful an insightful production of a great play can be.

Few companies in South Florida could conquer this elliptical tale in which little substantive is actually said and even that is usually suffocated in banal chit chat separated by pregnant pauses. Emotionally, everything happens below the surface like lava roiling under the volcano’s cooled crust.

Zoetic’s arsenal here encompasses a trio of actors and a creative team all precisely and deftly molded by artistic director Stuart Meltzer.

Usually, critics use adjectives as space-saving shorthand to describe performances. But all three actors create beings so fully credible that their essence can no more be adequately reduced to traits than if you were trying to describe your neighbor.

The lovely McKenna exuding a casual sexiness has constructed someone cradling secret knowledge deep in her being… McKenna’s Emma does not seem plagued by guilt at her betrayals of both men in various ways, only concerned at avoiding the devastation she knows will follow if the secrets tumble into the light.

As Jerry, the handsome Richberg (equal time here for physical description) initially seems more the model of a controlled upper-middle class British, but over the course of the play Richberg reveals Jerry to be a hapless slave to the emotional high and lows as the relationship devolves – or actually evolves.

But the triumph, a word we often overuse, belongs to Mena in a performance that once again makes you feel cheated that he simply isn’t seen often enough. His Robert, who also is a serial adulterer, prizes a seemingly impenetrable veneer of correct civilized behavior imbued in all classes of British society. Yet, Mena brilliantly exposes the tumult underneath when the shell briefly cracks open.

The fact that Zoetic Stage would attempt such a piece, artistically and commercially, let alone succeed so thoroughly, is validation of what has been increasingly evident: that Zoetic no longer is an up-and-coming company of great promise; it has arrived as a mature, reliable purveyor of fine theater.


Ah, the happy night at the theatre when everything is just right, simply brilliant; an experience not often found. But, lucky you, there's such a pleasure on display right now, thanks to Zoetic Stage.

Chas Mena is Robert... the epitome of the well educated, blindly arrogant Englishman. Mena's handling of the letter scene in Italy, tormenting, Emma, is a lesson for any aspiring actor. Nicholas Richberg is Jerry, literary agent and betrayer and... the vulnerable, guilty Best Man...Amy McKenna is Emma, Robert's much wandering wife...  the happy catalyst, queen of two homes and lover of two men. At least.

To say that these three are terrific would be the understatement of the year.

Stuart Meltzer's smoothly unobtrusive direction has his actors moving in a constant dance of accusation and revelation on Michael McKeever's beautifully designed two-level set, an all blonde wood, two tiered thrust with a large playing area. The actors, when not on stage, sit in subtly lighted archways on the upper level.

Playing the pauses in a Pinter play (sorry) is an art more than ably demonstrated by this cast. There's a constant edge to every second of the show and well done, Zoetic, for that.


...in Zoetic Stage's bold, possibly alienating but ultimately winning production, director Stuart Meltzer's pauses linger as long as most modern audiences will accept. There are few so lengthy that you forget the previous line of dialogue, but any production that respects Pinter's wishes, as this one does, is a tortoise in a hare's world. It doggedly resists the rapid-fire temptations of most film, TV, and stage writing in favor of deliberation that, in its unfamiliar way, is far more realistic... For spectators tired of the familiar rat-a-tat pacing of the majority of contemporary plays, this languorous style brings inestimable pleasure.

Meltzer draws intelligent, understated work from his cast while limiting their capacity to even nibble on scenes, let alone chew them. Significance rests in seemingly insignificant gestures...

... Mena is particularly nuanced in his performance, from his Parkinsonian shaking of his liquor glass to the prying contempt with which he interrogates his wife to the silent near-scream of anguish when he learns of Emma's affair...


Zoetic Stage presents Betrayal at the Adrienne Arsht Center for the Performing Arts through May 31, 2015.
Posted by C.L.J.