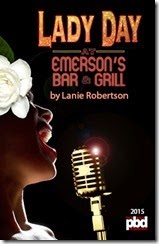 Palm Beach Dramaworks opened its production of Lady Day at Emerson’s Bar and Grill on May 15, 2015.

Just four months before her death, the great Billie Holiday takes the stage at a watering hole in Philadelphia, where she relates the story of her hard-knock life and triumphantly shares more than a dozen songs.

Veil after veil are slowly stripped away from the elegant sophisticated stage persona that is “Billie Holiday” until standing exposed is a blunted devastated victim of racism, sexism and abuse – some imposed and some self-inflicted — in Palm Beach Dramaworks’ incisive Lady Day at Emerson’s Bar and Grill…. actress Tracey Conyer Lee and director J. Barry Lewis successfully chart Holiday’s disintegration over decades.

The play-with-music requires a singer who can recreate 16 of Holiday’s standards in her idiosyncratic but recognizable voice. But equally, it requires a skilled actress comfortable as a storyteller but who slowly reveals the ravaged soul. Lee, under Lewis’ practiced eye, is fully up to the task – entertaining one moment and deeply affecting the next.

Whitted, who doubles as the musical director, deserves considerable credit both as a nimble accompanist and for helping Lee resurrect Holiday’s sound.

…Dramaworks doesn’t ever skimp. Jeff Cowie’s closely observed set evokes the period, from the exploding atom chandeliers to the full bar waiting to serve customers. Kirk Bookman’s fluid lighting is rarely noticed but changes the sense of place many times. Leslye Menhouse has created the gorgeous gown. The crucial sound quality is due to Richard Szczublewski.


Slipping into Billie Holiday’s skin can’t be an easy assignment. Her sound was so distinctive. Her indefinable charisma so much a part of her allure.  The tall order is only partially filled by Tracey Conyer Lee... As an actress, she’s close to faultless. As a singer, somewhat less so. It’s not that she’s not an accomplished singer. It’s more that the spoken parts of the show… are so much more powerful than the songs

Lee, ably backed by jazz masters Whitted and McArthur, is at her best in songs that are charged with drama. Her passionate interpretations of Strange Fruit, about lynching in the South, and Deep Song, the show’s devastating conclusion, seize the heart.

At that point, comparisons to Holiday’s vocal prowess are irrelevant.


At Palm Beach Dramaworks, the stand-in for Holiday is Tracey Conyer Lee, an impressive performer who manages to channel the legendary vocalist without attempting an impersonation. Coaxed and cajoled by Holiday’s longtime pianist, Jimmy Powers (Brian P. Whitted), she struggles through her set of blues-tinged numbers...

Between numbers, Holiday bears her soul to us, sifting through her personal life as if at a confessional, an unlikely occurrence for the famously guarded singer. Lanie Robertson’s play is well-researched and skillfully written, even if it falls into the static and artificial traps of the one-person show genre.

Still, there is plenty of reason to head to Dramaworks during the next two weeks, chiefly to see Lee’s tour de force performance. She sings quite well, but it is the portrait of the dissipated woman trying to rally herself to perform that is so striking. And when, late in the evening, she heads offstage for a heroin fix, Whitted fills in with a jaunty jazz riff on the piano. Director J. Barry Lewis guides the two of them through the play-with-music, doing what he can to finesse the one-person show landmines, succeeding by taking a back seat to the impressive Lee.


With Tracy Conyer Lee's portrayal of Holiday in "Lady Day at Emerson's Bar and Grill," the jazz singer comes off as fragile and hesitant even before she launches into a satiny smooth "I Wonder Where Our Love Has Gone."

Holiday's pianist, played by Brian P. Whitted, whom she really leans on, and bassist, played by Phil McArthur, seem to sense Holiday teetering around the abyss as she begins to pick her way gingerly through her set list. Occasionally, the pianist gently has to guide her back on track or snap her out of her reverie when her musings to the audience lead her down a path of no return.

...throughout, Lee is dazzling. She doesn't imitate Holiday, but evokes her languid timing, always lagging just behind the beat. While we can hear that Lee has a mellifluous instrument, she strips it down to Holiday-esque, torchy tones, where a small voice, used with adeptness, can be quite dramatic...

Holiday... comes apart in the middle of "Don't Explain." It's not a melodramatic meltdown, mind you, just cracks in the porcelain that split wider and wider until she can't go on. That ending, the velvet-gloved work of director J. Barry Lewis, is cinematic and breathtaking. The last theatric flourish leaves you with an image that lingers for days.

The blog Lacunae Musing had this to say:

Dramaworks has created the perfect time machine and the only thing missing from the ambiance of this place are the cocktail waitresses serving the audience and cigarette smoke heavily hanging in the air… the stage having been transformed into this south side Philly night club…. Perhaps “Mad Men “came here when in Philly on business, downing a few during those late night

Tracey Conyer Lee channels Billie’s story, pain, and songs during this 80 minute, intermissionless performance. She is an experienced actress, not a cabaret singer, although one would not know that from this evocative portrayal… we are convinced it is Billie mournfully singing to us, truthfully talking to us. She follows what Billie says in the play: “I’ve got to sing what I feel.”

Tracey Conyer Lee’s ability to pull off a legitimate gig must be credited in part to her highly experienced and extraordinarily talented piano accompanist, Brian P. Whitted who also plays the role of Billie’s manager, Jimmy Powers. He is the musical director of the show, and is ably assisted by Phil McArthur on the bass.

As Billie once commented, “There's no damn business like show business - you have to smile to keep from throwing up.” However, this is one performance not to be missed, a fitting end to Dramaworks’ season. The person sitting next to me said she saw the recent NYC production of the play with Audra McDonald and Dramaworks exceeded that production in every respect. I believe it.