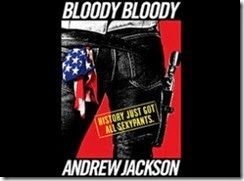 Outré Theatre Company opened their production of Bloody Bloody Andrew Jackson at the Broward Center for the Performing Art’s intimate Abdo New River Room on May 1, 2015.

The explosive off-Broadway hit Bloody Bloody Andrew Jackson reimagines America's first populist president, casting him as a rock star. If you're sexy and charismatic, is it okay to be violent and bigoted? Is the guy you'd want to have a beer with really the guy you want running the country? A look at both the positives and pitfalls of populism, Bloody Bloody Andrew Jackson is a sexy, updated look at one of the most influential characters in American history. Alex Timbers’ clever book for the show was nominated for a Tony.

The pumped-up show about a divisive president — his historical rep, the musical argues, runs the gamut from great leader to perpetrator of genocide — adds to a spring surge in intriguing productions in a county that hasn’t been as hospitable to theater as Miami-Dade or Palm Beach. But as the surge demonstrates, Broward theater is on the upswing.

Bloody Bloody contains profanity (some defacing portraits on the set), offensive language, sexual innuendo and stinging political satire that will remind audiences of just how little down-and-dirty politics have changed from Jackson’s day to the nasty, paralyzing present. The show is a wild, pointedly provocative ride, and those who like their entertainment pleasantly inoffensive shouldn’t think about hopping aboard.

The score, performed by musical director-keyboard player Kristen Long (who also sings beautifully) with Wayne Rediker on guitar, Martha Spangler on bass and Walt Brewer on percussion, presents Jackson as a rock-star military leader and politician… The music thunders and softens repeatedly through the course of the show, and it’s all impressively sung.

Robert Johnston plays Jackson with an emo broodiness mixed with volatility and a populist appeal. He bonds with Kaitlyn O’Neill as Rachel, Jackson’s controversial wife… O’Neill has a powerful song about political sacrifice in The Great Compromise (though its fleeting reference to the Jacksons’ slave owning is a jarring reminder of that particular presidential fact).

Bloody Bloody Andrew Jackson takes plenty of liberties. But a stodgy history lesson it is not.

Artistic Director Skye Whitcomb and Assistant Director Sabrina Lynn Gore have located the precise gonzo groove the work demands for much of the evening and yet smoothly change gears when the horrid truth of what Jackson has wrought finally comes clear even to him -– and to those in the audience who see tragic parallels to the current socio-political scene.

The focal point was Robert Johnston’s portrayal of the arrogant, dimwitted Jackson. Johnston… has enough charisma and rock swagger to make Jackson almost likable in his simultaneous self-absorption and insatiable need for adoration. But as Jackson discovers the pragmatic requirements of running a government and the compromises requiring selling one’s soul, Johnston depicts the war between Jackson’s troubled conscience and his blithe rejection of any transitory qualms.

The rest of the 12 cast members slipped in and out of characters that encompassed textbook names like Henry Clay and Martin Van Buren plus a kind of Greek chorus. Standouts included Kaitlyn O’Neill as Jackson’s wife Rachel, Michael Mena as his Indian ally Black Fox and Conor Walton as a hilarious dazed and brainless John Quincy Adams.

Outre has wisely extended the stage and added a runway into the auditorium for the actors to invade the audience’s space. Actors make entrances and exits through the audience and might stop off at some patrons’ tables for a chat. A major improvement in the new home is the sound quality; at Mizner Park, the lyrics were often unintelligible.

…there is something to offend almost everyone, the music is aimed at a younger demographic and it even runs a tad long. But for those whose preference run more to Rent than Mamma Mia, this is your acidic cup of tea.

The book by Alex Timbers is written as an extended skit with modern references and jokes, and dialogue that lends itself to intentionally bad acting. This goes perfectly with the rock music and lyrics by Michael Friedman, whose score is both catchy and ominous, especially on "Ten Little Indians" performed by Erica Mendez while Jackson moves several native tribes from their lands either by negotiation or force.

Johnston is every inch the sexy rock star---physically and vocally---that the creators envisioned when they wrote this version of Jackson. O'Neill is winsome and straight-talking as Rachel, a woman who simply wants her husband by her side. Her full silky voice elevates several songs, including "The Great Compromise". Walton delivers another hilarious performance as the lollipop-licking, overgrown man-child John Quincy Adams. Mena's Black Fox is intense and greatly contributes to the tension in the story.

Say what you will about Andrew Jackson---some believe him to be one of the greatest presidents we've had, responsible for adding more land to the country than any other, while some believe him to be a power-hungry, grudge-holding maniac responsible for genocide of Native Americans. What comes across most in this version is that Jackson was a man of contradictions. Outré Theatre Company's production of BLOODY BLOODY ANDREW JACKSON is rollicking and raucous, and definitely rocks the house.


The rollicking rock musical about our seventh president, a big hit Off Broadway that fizzled on the big, big money stage on Broadway, is the perfect vehicle for Outre and its leadership, artistic director Skye Whitcomb and assistant Sabrina Lynn Gore.

Robert Johnston offers a breakout performance, transforming Jackson into an Emo rock star, dramatically delivering the internal conflict the president faced while soaring vocally in numbers such as “I’m Not that Guy” and “I’m So that Guy.” Between the theatrical and musical demands, it’s a tough role to pull off, but Johnston conquers, guyliner and all.

The players are accompanied by an accomplished rock band led by Kristen Long, who did triple duty as musical director, keyboardist and the fill-in for the storyteller after Jackson pushes her off a cliff. Yes, a cliff. (We’re thinking that didn’t really happen, either.)

The Broward Center’s Abdo New River Room is an appropriate space for the single set production, a graffiti-covered Antebellum sitting room designed by Gore. She also created the ‘80s punk-inspired costumes that manage never to stray too far from the actual fashions of the early-19th century.

John Thomason reviewed for The Broward/Palm Beach New TImes: but he came to a preview, not an actual performance.  We’re not sure why he reviewed a preview, which is considered a rehearsal, but no one is supposed to review previews, so we’re not going to link to it.

Richard Cameron wrote something that is supposed to be a review for The Examiner.  But don’t bother with links to Broadway Global or USA Theatre chat or anything else that looks like it leads to more review: he’s just driving traffic to his other blogs.  Irritating.  (ed. update – I don’t begrudge anyone driving traffic to other sites; but there are so many links it’s confusing).  But here’s what he wrote:

Youth will embrace the rock music melodrama that breaks down the history of America with funk-tastic furry. Bloody Bloody Andrew Jackson explodes with titillating truth.

The musical is a true ensemble piece of musical theatre… The direction, staging, artists in this production of Bloody Bloody Andrew Jackson bring the journey to life. If you don't leave the theatre enlightened with American history, you went to wrong theatre.

The Outré Theatre Company production of Bloody Bloody Andrew Jackson plays at the Broward Center for the Performing Art’s intimate Abdo New River Room through May 17, 2015.
Posted by C.L.J.