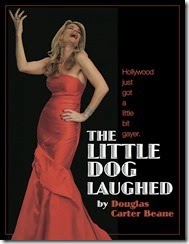 Island City Stage opened its production of The Little Dog Laughed at Empire Stage on April 16, 2015.

Spring lightens the mood with the Broadway comedy, The Little Dog Laughed by Douglas Carter Beane. This rollicking comedy follows the adventures of Mitchell Green, a movie star whose resourceful agent, Diane, keeps pushing him back in the closet, even while he’s falling for a cute rent boy with a girlfriend. (Wait, the rent boy has a girlfriend?).

Island City Stage’s production of Douglas Carter Beane’s hilarious and touching The Little Dog Laughed explores the conundrum set amid the pragmatism of 21st Century seekers of fortune and fame in the shallows of a celebrity-centric culture.  Island City Stage may be committed to LGBTQ elements in all its programming, but it has emerged as one of the troupes most likely to produce a satisfying evening of theater regardless of mission.

The solid cast under Michael Leeds’ direction mines both the copious Dorothy Parker-style wit satirizing the morally bankrupt as well as the pathos of those same stunted souls struggling to find some kind of emotional fulfillment.

Mitchell/Crawford and Diane/Matthews lie, coerce, wheedle and flatter in near perfect sync; it’s like watching the more expert half of a tennis doubles match in overdrive.

This is sardonic catnip for Matthews. She is one of those actresses with a supporting part here, a lead in a small production there, who somehow you just knew would meet the challenge if someone would give her the right meaty role. Sure enough, she proves here by thoroughly investing herself in the creation of this glorious epitome of delicious venality.

Crawford just won a Best Supporting Actor Carbonell… Among his accomplishments here is persuasively portraying a “nice guy” who has yet to let the pursuit of celebrity to completely skew his decency.

Uribe makes his professional stage debut with a seamless creation of a complex human being. Much of the time, Uribe is completely believable as a young man who is as surprised as anyone that he is developing genuine feelings for Mitchell.

Chang is not quite as polished as the rest, but she is credible as a young woman beginning to yearn for something more than the shallow life surrounding her. She, as with Uribe, grows deeper into her part as the evening progresses.

…it’s hard to find Leeds’ fingerprints, but the proof is in the always reliable results of his leadership: engaging storytelling that never has people checking their watch, perfectly paced performances that delve deep into psyches, and lots of bits of business subtle and otherwise that enhance the script.

…The Little Dog Laughed is a rollicking and eventually insightful expose of the human condition in what sociologists will someday classify as The Kardashian Era.

The script by Douglas Carter Beane, getting a near-flawless production by Island City Stage, has a great deal to say about love. And it says it well, with sophistication, wit, insight and irony. At times, this staging gets it so right it'll make you shudder, as if the ghost of relationships past have put an icy hand on your shoulder. Relax. For most of the play's two hours, including a 15-minute intermission, you'll just laugh yourself silly.

Diane, the venal agent played with lean-in deliciousness by Mia Matthews... gets many of the best lines, and Matthews knows how to deliver them to maximum effect.

…her client Mitchell …played by Chris Crawford, who adroitly handles the turn-on-a-linchpin emotions…There's also an interesting dynamic between Crawford and Uribe's characters… Alex… embodied by a quietly authoritative Michael Uribe.


Matthews is excellent as the acerbic Diane. She’s a tall drink of water who oozes sultriness and wears clothes like a runway model. Her expressions, which show her true feelings as she schmoozes phone callers, are hilarious. She glides through scenes, impeccably dressed, doling out her harsh, no-nonsense advice like a 21st century fairy godmother.

Crawford plays Mitchell like a farm boy on his own in the big city. He’s surprisingly innocent and wide-eyed for an actor who’s been kicking around Hollywood for a while. He does convey Mitchell’s dilemma very well, struggling between who he is and who he needs to be for the sake of his career.

Uribe has a handsome face and an impressive, sculpted chest, but he’s not just eye candy — his performance is equally impressive. Uribe and Crawford share some deep, intimate moments, and the production is better for it. Chang rightfully plays Ashley with a quirkiness — she’s very convincing as a young woman who’s been around the block a few times but suddenly, facing grown-up problems, manages to rise to the occasion.

Nearly a decade after its Off Broadway premiere, Douglas Carter Beane’s satire, “The Little Dog Laughed,” may be a little less likely, but the latest production from Island City Stage still delivers the laughs, thanks to a first rate cast and direction.

Handsome Crawford, winner of a Carbonell Award this year for “Murder Ballad” at Actors Playhouse, and the svelte Uribe deliver fine performances as two men who develop a deep, emotional bond from a chance sexual encounter, both forced to make compromises in search of true love.

But it is Matthews, a veteran of the Nickelodeon TV series, “Every Witch Way,” who delivers most of the stinging jabs and jokes and propels the sometimes tedious, two-and-a half hour-long show.

Island City Stage’s associate artistic director, Michael Leeds makes excellent use of the intimate Empire Stage space and sets a fast pace, especially during the 75-minute first act, as the complex relationships are introduced and developed.

The Island City Stage  production of The Little Dog Laughed at Empire Stage on April 16, 2015.
Posted by C.L.J.