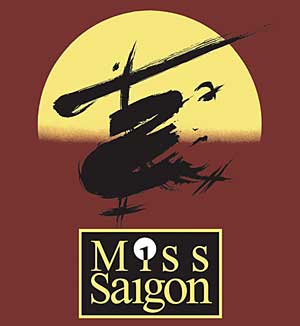 
Alain Boublil and Claude-Michael Schönberg, along with Richard Maltby, Jr., bring Puccini’s Madame Butterfly to the modern world in a moving testament to the human spirit and a scathing indictment of the tragedies of war. In the turmoil of the Vietnam War, an American soldier and a Vietnamese girl fall in love, only to be separated during the fall of Saigon. Their struggles to find each other over the ensuing years creates an unparalleled drama and a must see musical theatrical experience.


What director David Arisco has done is a major accomplishment... Yes, scenic designer Sean McClelland and lighting wizard Patrick Tennant manage to approximate of the arrival of a helicopter on the roof of the American embassy in Saigon and other effects, but at least as impressive is the passion the cast infuses in the saga.

....Herman Sebek, deliciously oily as The Engineer, so captivating and conniving in his 11 o’clock solo of sleaze, The American Dream.

...EJ Zimmerman as the delicate Kim, with a powerful vocal instrument.

...this is an impressive show in all respects. So now what does Actors Playhouse do for an encore?


Herman Sebek is truly spectacular as The Engineer. He surely owns the smooth and villainous comedy of this role.

At first, EJ Zimmerman has a voice that sounds too small for the role of Kim. But as the show progresses she demonstrates her strength through her vocal stamina, and the simple purity of her sound is well matched to the nature of her character. It is nicely juxtaposed with the strong, mature sound of Amy Miller Brennan who plays Ellen in the song "I Still Believe."

A handsome Christopher deProphetis, who plays Chris, is lacking some of the acting maturity called for in his role as a true leading man.

Chris-Ian Sanchez, who plays Thuy, has a legit singing voice that is glorious. He is guilty of some major over-acting in the last few seconds of his death scene, however, and it comes off as melodrama.

Prior to the opening of this production of Miss Saigon the audience was abuzz discussing how the Actors' Playhouse was going to handle the famous helicopter scene. No need to worry, as the scenic, sound and light design all work together to create the moment quite effectively.

This production of Miss Saigon is splendid in spots and is worth seeing, but doesn't quite measure up to the high standards established by Actors' Playhouse in last year's standout production of Les Miserables.


As demonstrated by last season's production of Les Misérables, Actors' Playhouse and its artistic director, David Arisco, are more than capable of pulling off the complex megamusicals that dominated Broadway before the ascendance of movie-inspired and jukebox musicals. And the opening of Miss Saigon this weekend simply provides more proof: A home-grown production of a challenging Broadway musical can be just as entertaining -- and moving -- as most of the touring shows that visit South Florida.

Arisco, his cast, musical director Eric Alsford, choreographer Chrissi Ardito and the design team deliver a Miss Saigon full of heartbreak, flashy style (the costumes are by Ellis Tillman) and the kind of powerful singing that an operatic through-sung musical demands.

On Sean McClelland's versatile, impressionistic set (which, in collaboration with lighting designer Patrick Tennent and sound designer Alexander Herrin, even achieves a persuasive version of the show's famous helicopter), the cast plays out a story that ranges from exquisite beauty (The Ceremony, in which Chris ``marries'' Kim) to fabulous tawdriness (that ode to excess, The American Dream).

Arisco has filled a number of the show's key roles with Asian-American performers who are Saigon-experienced, a decision that pays off thrillingly...