Coconut Grove Playhouse is Back - in the News 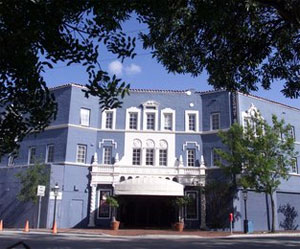 The long-shuttered Grove is in the news again:  The Coconut Grove Grapevine reported on Thursday that Miami City Commission Chair Marc Sarnoff introduced a resolution to ask the State of Florida to take back the Playhouse from its current board per the restrictions in the Quitclaim Deed, and to convey it to a newly formed not-for-profit corporation called the The Grove Playhouse Theater, Inc.


Sarnoff called the Playhouse a "big economic driver for the Grove" and said it is now time for the reverter clause to be used. The theater should have been opened within 30 days of closing, but it has been four years now.

No mention was made about the agreement between the Coconut Grove Playhouse board and GableStage.

The Miami Herald picked up the story on Saturday, and the first thing mentioned is that deal:


What seemed like an almost-done deal -- bringing back a smaller version of Miami's historic Coconut Grove Playhouse with GableStage producing theater there -- may not happen at all if a resolution just passed by the Miami City Commission spurs action from the state of Florida.

But the Herald article gives us more information about the Quitclaim Deed:


Among the deed's requirements: The playhouse property can be used only for theater, theatrical productions, theatrical education or related arts uses. If the property isn't used for that purpose, after 30 days it automatically reverts to the state. The theater, whose board is still trying to resolve the $4 million in debt that led to its abrupt closure, hasn't operated in nearly four years.

Could the $24 million currently on hold for use by the Coconut Grove Playhouse be transferred to an organization created in the manner the Commission plans?  No one has said.


"I am terribly disappointed in the city and surprised. We have a plan . . . to bring quality professional regional theater to Coconut Grove and to revitalize the property. Until I am told otherwise, we are the Coconut Grove Playhouse.''

Of course, those "plans" haven't been original or executable.  In fact, "find corporate partners" and "redevelop the site" are goals, not plans, Shelly.

The only thing you've accomplished in four years is getting GableStage to agree, in principle, at some undetermined point in the future, to change their name and relocate to an un-built, un-designed space somewhere on the site of the current Playhouse (which you plan to tear down).

And that seems to have happened mostly because Miami-Dade Cultural Affairs Director Michael Spring got involved.

If the board of the Coconut Grove Playhouse really intends to have a future in bringing theatre in Coconut Grove, they'd better get their heads out of their collective asses and start involving the public - and the Commission - in their plans on a very visible basis.  The Grove won't be saved through secret meetings and silence; the board needs to out on the street and all over the media, engaging the public.

Thanks to the South Florida Daily Blog for the links.
Posted by C.L.J.