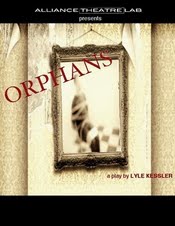 The Alliance Theatre Lab opened its production of Orphans at the Main Street Theatre on March 18, 2010.


First produced by the famed Steppenwolf theatre, Orphans is the story of two brothers -- Phillip, a wildchild naif whose illiteracy and innocence belie a feral intelligence, and Treat, a switchblade-wielding thief who manipulates his brother into remaining dependent on him. Into this den of dysfunction comes Harold, a not-so-legitimate businessman who takes the "Dead End Kids" under his tutelage. At its core, Orphans is a warped and disturbing father-and-son story.

The sheer preciousness of it all is an invitation to ham, but the brave actors of the Alliance Theatre Lab resist. They give Kessler's old script a loving treatment, as intimate as the tiny theater's warmly lit stage.

That this is so moving has less to do with the tricky script than with bravura performances from all three leads, particularly from the young McClendon. His whole performance is a great, big hope engine... If you want to see something recklessly, gustily beautiful in a theater, see this.


My wife was in tears, and so were other audience members, such was the power on stage at The Alliance Theatre Lab's Friday night performance of Orphans, written by Lyle Kessler.

Adalberto Acevado directed and Justin McLendon, Travis Reiff and David Sirois performed at such a pitch that “I laughed, I cried” became the truth once again. Rocketing around the stage, leaping furniture, slapping, tripping, wrestling, slamming into walls and onto table tops, Sirois as big brother Treat and McLendon as little brother Phillip create the perfect “you're the stupid, sickly little brother who can't read and can't leave the house, and I'm the big brother who's protecting you by beating you down.”

Adalberto Acevedo designed the set, a messily cluttered living room that pulls us in, and the very effective sound, and Skye Whitcomb designed the excellent lighting for Orphans, a well presented, well acted and well directed show.


The Miami Lakes-based Alliance Theatre Lab has just opened an engrossing, accomplished production of Kessler's play. Director Adalberto J. Acevedo effectively explores the script's many emotional colors -- whimsical humor, explosive violence, long-buried need -- with a trio of actors who impressively deliver both the charged and tender moments in the play.

Alliance's Orphans cast digs into Kessler's characters with obvious relish. Sirois' Treat is the personification of frustration, explosive anger and unacknowledged need. Reiff's often-jolly Harold is a manipulator whose emotional tool kit includes his own brand of menace. And McLendon's childlike Phillip provides both plentiful laughs and utter sweetness.

Orphans has been around a long time... But as Alliance's production demonstrates, the mystery Kessler conjures and the emotional truths he explores haven't become dated at all.