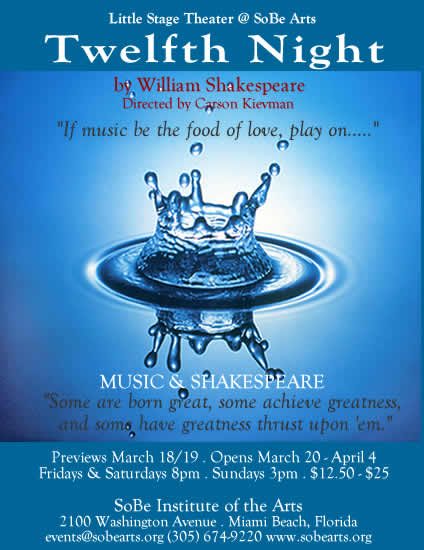 SoBe Institute for the Arts premiered on the South Florida theatre scene on March with its production Shakespeare's Twelfth Night.


Of the fourteen person cast in Twelfth Night, two are Equity, two are steadily working non-union professionals and the rest are, gee, I don't know what. There are some great credentials floating around here, including those of the director, but the end result is a mishmash of desperation, ineptitude, and molasses.

If someone in the company knew how to rag a door and hang black curtains perhaps we would not have been treated to the incessant clicking of door handles and the brightly lighted view of Washington Avenue.

Without the benefit of having seen the space, I will point out that if the door were a fire exit, it's actually illegal to hang a curtain in front of it. But if that's the case, it's prudent to setup the stage so it's not in sightlines - or so it's not opened in the course of the show.


Seating is on either side of the vom and beyond the playing area looking back towards the lighting instruments. This is where one unfortunate audience member spent the three hour show first shielding her eyes with her program, then donning her sunglasses, and finally using both sunglasses and program.

If I'm harsh here it's because I'm disappointed. The cast, the crew and the audience deserve something better than this.

Shakespeare's work has been modernized and analyzed so many different ways, we forget the pleasure of his words played simply as they are written. The inaugural production of SoBe Institute of the Arts' Music & Shakespeare series brings it back home in Twelfth Night.

Director Carson Kievman... wanted to do the play as it was in the 17th century, so he incorporated singing accompanied by live harpsichord and guitar, played by Adam Chefitz and Carl Ferrari, respectively.

The period music does add something special, even if Andres Lefevre, a talented singer who plays Feste the fool, has trouble with the high notes early on.

...the action is jump-started when Olivia's uncle, Sir Toby Belch, and his merry pranksters enter. Charismatic local theater veteran Ken Clement plays Sir Toby to the bawdy, drunken hilt, and it suddenly feels like they're getting at the original Shakespeare, who wrote for the people. Clement has great chemistry with perpetually tipsy Sir Andrew (Glen Lawrence) and meets his match in Merry Jo Cortada as Maria, Olivia's servant, who brings her infectious laugh and has no problem playing with the boys -- or playing them.

...McKenna acquits herself best as an Olivia who's more likeable than needy, followed by Sanchez's sweetly heartfelt Viola.

Although I wished for more force from some characters, the cast is ultimately winning in the classic play on mistaken identity that turned the social order on its head, allegedly echoing the medieval festival for which it's named. When Viola and Sebastian are reunited and all is revealed, it is a genuinely moving moment.

Brandon K. Thorp reviewed for the Miami New Times, and he is less than enthusiastic about the production:

In a story in last week's Miami Herald, Carson Kievman said South Florida "doesn't have access to as many great performers as other cities" and that acting talent is "sparse" in these parts. To Kievman, director of the SoBe Institute of the Arts — and director of the anemic Twelfth Night  now floundering at the Carl Fisher  Clubhouse — I say, Fie! With an attitude like that, you should be grateful to have any actors at all.

I wish there was more to this production than a collection of venal oversights and slip-ups, but there isn't. Twelfth Night is allegedly a comedy, yet I cannot remember hearing a single honest-to-goodness belly laugh. The mean energy level in the house wasn't high enough to generate one. Shakespeare's tale of cross-dressing, misplaced love, and filial devotion should be a barnstormer — lusty, fast, and zany. This Twelfth Night is torpor-bound...

The production's hook, as I understand it, is that it incorporates the very music Shakespeare originally intended to accompany his play. To give it voice, you selected a talented young man... with an entirely inappropriate vocal range. He squeaks his way through almost every song. Only late in the evening, when Lefevre snatches a single opportunity to deploy his surprisingly sturdy baritone, do we realize this is a man with singing experience beyond the shower.

Lefevre is a capable actor in scenes that allow him to speak rather than sing, and other members of the ensemble also display a fair amount of chops. Amy McKenna  is elegantly icy in her early scenes as Countess Olivia and downright charming when she begins to thaw. Jody Owen, as the steward Malvolio, is lovably hapless — there is no one I'd rather see grinning foolishly while cross-gartered in yellow stockings. But their solid work doesn't have a hope of saving your show. The only really credible efforts to do so come from Ken Clement (Sir Toby Belch), Merry Jo Cortada (Maria), and Glen Lawrence (Sir Andrew Aguecheek), who work their asses off in scenes of drunken revelry to inject some spark, some humor, some verve into a stillborn production. For a few giddy moments, they succeed.

But that's their success — those South Florida actors — and not yours. Luckily for you, there are many, many more of their ilk around. If you'd like to attract them to your casting calls — and you can, given the success of past work — please consider giving them reasons more compelling than the promise of screeching doors, scenes interrupted by highway traffic, dumb lighting schemes, and contempt.

This particular review read too much like a letter to a director instead of, well, a review of a play.  So Brandon didn't like the singer's voice for parts of the show; but was the concept itself sound? If the singer had had the range, would the music enhance the play?  Brandon doesn't t say.
SoBe Institute for the Arts's production Shakespeare's Twelfth Night runs through April 4th, 2010.
Posted by C.L.J.