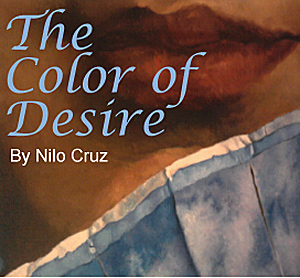 Actors' Playhouse opened the world premiere of Nilo Cruz's The Color of Desire on October 8, 2010.

Nilo Cruz, Pulitzer Prize-winning playwright for Anna in the Tropics, creates a world full of lyricism in The Color of Desire, a new play set in Havana, 1960. As the revolution heats up, a dashing American businessman hires a young Cuban actress for a role unlike any she has ever played: the woman he loved and lost. A vibrant exploration of the lost love affair between America and Cuba, The Color of Desire tells a story of intrigue, seduction and the pursuit of freedom with both great humor and profound emotional resonance.


Belen falls in love with Preston (strappingly sexy Jim Ballard) a wealthy American whose business is threatened by Cuba’s new regime. Preston courts Belen, not because he is in love with her, but because he wants her to help him recapture a tempestuous love affair he once had with a woman to whom Belen bears a striking resemblance.

The Color of Desire lags when attention is drawn from Belen’s aunts (whose bickering banter lends a humorous touch) and the story of Belen and Preston, to ex-pat couple Caroline (Barbara Sloan) and Oscar (Michael Serratore).  As luminous as Sloan is and as funny as Serratore is, they detract from the real story.  These characters deserve their own play, but they don’t work as second fiddles here.

Guillen shines as Belen.  In the course of two hours, she transforms from an ebullient innocent to a wanton, bitter woman.  That transformation is illustrated by Ellis Tillman’s sumptuous costume design.

But the reason to see The Color of Desire is the play itself.  Few playwrights are able to integrate poetry into dialogue, but Cruz is a master.  Don’t miss this world premiere production.


...this is really where The Color of Desire loses its punch. Too much is made of the history lessons and too little of Belén's and Preston's relationship .

It is in these scenes where Cruz's famed lyricism is most on display, and where the stylized movements and dialogue slow down to almost a crawl. Yet still we need more. More of the former love, the fantasy figure, and more of Belén who starts out as an innocent and changes so quickly. And more, too, from Preston, who prefers fantasy to reality. And less of the well-known politics from fifty years ago.

This show is typical of Actors' Playhouse dramas: wonderful production values and staging and yet sometimes strangely wooden and desultory performances from the very professional actors.

Cruz creates a premise that is intellectually dazzling and emotionally thrilling. But the actual execution, on paper and on the stage, ebbed and flowed unevenly at the world premiere Friday at Actors’ Playhouse in Coral Gables.

...the play meanders aimlessly until Preston reveals his proposal. And even then it’s not especially compelling until the couple make their first descent into the fantasy. That’s when Cruz’s genius meshes with David Arisco’s direction and the leads’ acting: The audience is as off-balance as the characters. We do not know if we are watching a recreation in the real world or a fantasy playing in his mind (or her mind) or a time traveler’s spying of the actual events in the past. It is an electrifying hall of mirrors scene worth the entire evening.

What simply does not work – and desperately needs to – is the growing dread of the impending and encroaching disaster.

Ballard, a fine actor in many shows, is only convincing here when lost in the fantasy and when he finally realizes his cherished life has been appropriated by the revolution. The rest of the time, there is little charisma.

Guillen, a stage actress better known for her television credits, is breathtakingly beautiful, but she radiates little heat as the tamped-down Belen. Again, it is only when she impersonates the sultry Emilia that she fully inhabits a character and in her final scenes when she rails against her fate.

But Sloan pulls off an equally difficult assignment: making us feel a twinge of sympathy for the shallow Ugly American as her world dissolves when the state takes her home.
Despite its flaws, The Color of Desire offers inspired theatrical moments.

Now getting its world premiere at Actors' Playhouse in Coral Gables, Cruz's drama reflects, through the prism of its vividly rendered characters, a rapidly changing Havana circa 1960. Though it has a setting and era in common with Carlos Lacamara's Havana Bourgeois (which was also done at Actors'), this script is pure Cruz: artfully crafted, affectionately funny, sizzlingly passionate.

Under David Arisco's direction, the cast... beautifully serves the play.

Ballard, who looks Mad Men-handsome in suits, a dinner jacket and various states of undress, pulls off the feat of making a guy who is (let's get real) a married user into a mysteriously intriguing figure. The ethereal Guillen takes Belén on a journey from innocence to grand passion to ruined hunger, looking magnetically beautiful in even the simplest of the many gorgeous dresses costume designer Ellis Tillman has dreamed up for her.

But ultimately, it is through the alchemy of an imaginative playwright's words that the audience travels back to a forever-altered place, a world in which dreams morphed into nightmares.

Brandon K. Thorp reviewed for the Miami New Times, and boy, did he seem to have a bad night out:

He rips into the director:


Arisco's love of the big and obvious makes him well suited to many musicals. His Urinetown was sublime (that show's considerable subtleties are encoded within the music itself), and his Les Miserables, though hardly my favorite production, was at least directed with a subtlety commensurate with the writing.  Nilo Cruz's The Color of Desire  is very much not a musical, yet Arisco cannot help but direct its actors in such a way that they seem, at every moment, on the verge of forming a kick line.

He slams the actors:


The actors are generally overearnest, and the ones who aren't overearnest are playing for the most obvious laughs. They know how to ape basic emotions with their faces, but they have no ability to incorporate these fleeting impressions into lifelike fictional beings.

He picks apart the Cuban accent of a Cuban actress:


Isabel Moreno speaks with a Cuban accent only on certain occasions, while on others her speech dissolves into a distinctively Northeastern whine... I cannot account for this, because Moreno lived in Cuba for decades.

He disses the playwright:


Cruz's play is probably about things such as identity and false consciousness, and the way totalitarianism can be practiced in miniature in the bedroom. But what it communicates most of all is the senselessness of producing a play's first draft. The script is full of howlers, each of which is made doubly offensive by the fact that its author once won a Pulitzer.

But by the second act, he liked the costumes:


...appealing details begin making their impressions — most notably Ellis Tilman's costumes, which, especially on the ladies, exemplify both the beauty and the ridiculousness of the decadence Cuba's revolution was meant to abolish.

And manages to bitch-slap the playwright while complimenting the smallest roles in the play:


...one can enjoy Nick Duckart, one of SoFla's finest actors, confined here to three small, almost nonverbal roles. Absent Cruz's words, he is free to do as he will ....

Compare these reviews to those for Rising Action's Fit To Be Tied; does it seem odd that Brandon is taking a position so wildly contrary to more mainstream reviews?  I mean, disagreements are to be expected, but this approaches diametric opposition.
The Color of Desire plays at Actors' Playhouse through November 7, 2010.
Posted by C.L.J.