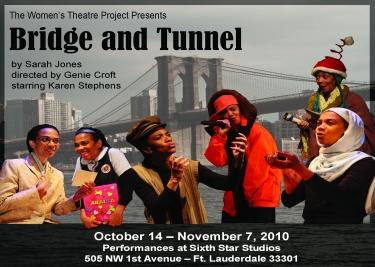 
Karen Stephens stars in this dynamic one-woman show with fresh ingredients added to modern urban America's melting pot.  Stephens portrays 14 characters traveling the roads of assimilation in an ever-changing America.  The mix of voices emanates from the reaches of New York's boroughs with origins far beyond the city's limits.  Mohammed, a charismatic Pakistani accountant; Mrs. Ling, the Chinese mother adjusting to her daughter's alternative lifestyle and Lydia, a young Latina with a quick wit and an even faster tongue, are but a few representations in the gallery of characters.

Genie Croft directed Karen Stephens.  But while the show is a cast of one, it would be a mistake to consider this a "one-woman show."


Jones, who won an Obie Award for Bridge & Tunnel  in 2004 and a special Tony Award when the show moved to Broadway in 2006, dreamed up 14 distinct characters, people with different accents, ages, genders and body language. Pulling off Bridge & Tunnel requires an actor with versatility and impressive talent. Fortunately, The Women's Theatre Project and director Genie Croft found just such an actor in Karen Stephens, the solo star of TWTP's just-opened production of Bridge & Tunnel.

Much of Bridge & Tunnel  bubbles with insightful humor. But a few of the characters require a deeper, more nuanced portraiture, and what Stephens achieves in those sections is both low-key and dazzling.

Ducking behind a pillar or into TWTP's tiny lobby space, Stephens repeatedly swaps simple clothing items -- a jacket, a scarf, a cap -- and reemerges as a different, utterly persuasive character. But of course, clothes don't make the women and men of Bridge & Tunnel; the melding of an insightful writer and a wonderful actor do.


An actress with remarkable chops, Stephens creates 14 characters, men and women, out of the stuff of her own talent and the sometimes brilliant writing of Sarah Jones...

Karen Stephens' real strength here is that she's endearing. She draws us in so successfully that we become one with the show, interacting with her characters. We're in that dingy little cellar, we can feel those 14 people. If the love story of the crippled Mexican in the wheel chair doesn't clutch you, you have a heart of stone.

Directed by Genie Croft, this is a smooth production making full use of a cramped playing area.


Bridge and Tunnel is a patriotic piece, as Jones presents a view of American through the eyes and hearts of those who choose to live in this country, sometimes risking everything for the chance at freedom and liberty.

Stephens seamlessly morphs from character to character, beginning with Miss Lady, a homeless usher who gives the obligatory pre-show cellphone speech, to Mohammed Ali, the show’s enthusiastic Pakistan-born host, then to Lorraine Levine, a Jewish grandmother.

Stephens is a delightful, dynamic performer, and she brings each character vibrantly to life. Her dexterity in switching from character to character is a marvel, and she treats the audience to an insightful and exhilarating evening of theatre.