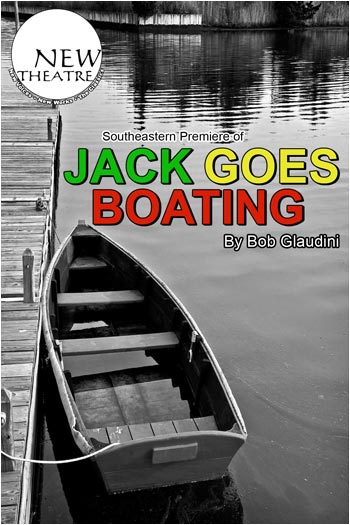 The New Theatre opened its production of Jack Goes Boating on October 8, 2010.

Laced with cooking classes, swimming lessons and a smorgasbord of illegal drugs, Jack Goes Boating is a touching and warmhearted play about learning how to stay afloat in the deep water of day-to-day living where date panic, marital meltdown, betrayal, and the prevailing grace of the human spirit abound.

....pulling off Glaudini's play, getting it to sustain an audience's interest for a couple of hours, is deceptively challenging.

Director Steven A. Chambers does a deft job of bringing out the sizzle in Clyde and Lucy's interactions, the awkward tentativeness in Jack and Connie's conversations, and the supportive friendship of the two guys as Clyde teaches a terrified Jack to swim at the neighborhood pool. Chambers and the cast also riotously pull off a disastrous party scene.

Vicchiollo and Montañez have the easier acting jobs, as their characters revel in big, intense emotions. Damaged Connie and just-plain-strange Jack are tougher to make touching or compelling. Hooper, sporting sad little white-guy wannabe dreadlocks, plays Jack as so emotionally muted that he seems more comatose than stoned. He and Shavonn do make it to a sweet little happy ending. But oh is that a long wait for a short bit of bliss.


The cast does a terrific job with the material and with illuminating the working class characters that populate Jack Goes Boating.  Hooper’s Jack is tall and rail thin, bearing no physical commonality to Hoffman, the play’s original off-Broadway Jack, but he embodies the shyness and tentativeness of the character.

Montanez’s portrayal of Lucy is spot on...  Shavonn brings Connie’s many insecurities to life.

Vicchiollo steals the show as Clyde.  Vicchiollo transforms himself into the stoned, jealous limo driver with a Zen-like approach to swimming.  His performance is polished... some the production’s best scenes.

The design elements in New Theatre’s production are a bore and don’t do the actors justice. Jesus Casimiro’s scenic design is uninspired and lacks proportion. Thomas Aratanha Fonseca’s lighting is particularly harsh and unflattering, so much so that at times, the characters look jaundiced.

Jack Goes Boating offers a glimpse into the lives of everyday people not often seen on stage.  They don’t lead fabulous lives, have fabulous jobs or live in fabulous apartments.  But when it comes to love and life, sometimes, they have something fabulous to say.


If sitting in a sight-line-challenged-theatre watching four stoner-losers bring drivel to an art form is your life's desire then you're going to enjoy the hell out of New Theatre's Jack Goes Boating. If, however, you're like me, you're going to sit there not giving a rat's ass about the unlikeable characters on stage.

Not that the acting and direction isn't okay in this production. It is. But it just isn't okay enough and the actors end up as irritating rather than amusing or entrancing.

Not an easy show to stage, Jack Goes Boating has a swimming pool, an office, a living room, two bedrooms and space for a monologue jammed onto New Theatre's small stage. Jesus Casimiro has done well here and lighting designer Thomas Aratanha Fonseca keeps right up, as does sound designer Ozzie Quintana.

Did you catch that? Mary loved the acting, hated the design elements, while Roger blithely glosses over the acting and praises the same design elements that Mary panned.  An odd bit of yin-yang, if you ask me.