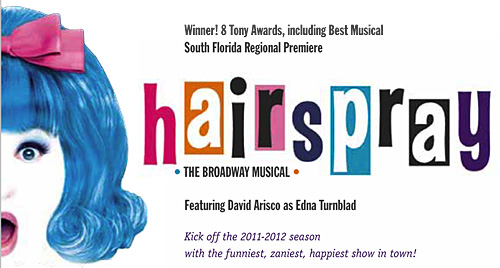 
A joyous tribute to the ‘60’s, this intelligent and hilarious musical has the best Broadway score in recent years. It’s 1962, and pleasantly plump Baltimore teen Tracy Turnblad has only one desire, to dance on the popular “Corny Collins Show.” When her dream comes true, Tracy is transformed from social outcast to sudden star, but she must use her new found power to vanquish the reigning teen queen, win the affections of her heartthrob Link Larkin and integrate a TV network – all without denting her 'do!


Actors' Playhouse at the Miracle Theatre kicks off their 2011-12 season with a sensational production of Hairspray.

David Arisco as a director has more than done justice to the show by lacing it with kitsch and comedy, and Barbara Flaten provides wonderfully choreography danced with exuberance by a cast of nearly thirty.

There are so many that are perfectly cast in this production that one actually hates to see their moments end, as the show returns to the business of furthering the plot. The combination of a bear-sized David Arisco as Edna Turnblad and an endearingly elvish Avi Hoffman as her husband Wilbur is scene-stealing at it's very best... Microphone issues on opening night plagued actor David Arisco. As a director who only takes the stage on occasion... it seemed most unfair to not hear every line of a role in which he shines.

Avery Sommers (Motormouth Maybelle) really just warms up in.. in the first act. She releases a powerhouse voice, packed with passion in her second act... that nearly stops the show.

Joline Mujica is likable as Tracy Turnblad, but comes just shy of capturing the infectious energy of the role. This may be due in part to microphone issues. Her voice is sweet, but we never get to hear it soar.... Matthew Ragas... does a great job as Link Larkin, avoiding the shallow portrayal provided by Zack Efron in the film. Her quirky friend Penny Pingleton is played by a very funny Julie Kleiner who emerges as a bombshell in her final transformation.

Some of the success of this production comes from the cameo roles. The trio of Talitha Farrow, Renata Eastlick and Tatianna Mott as "The Dynamites," an iconic girl group of the time period, are spot on. Beautiful to both see and hear, they provide a great reminder of the flavor of the '60s. Even Sally Bondi, appearing in a series of older character roles gets a chuckle in each one.


...who else but Actors' Playhouse throwing a stupendous party with Hairspray, the Tony winner now playing in Coral Gables.

And who are the guests?  Why just 33 of the best actors, singers, dancers, and musicians you can possibly imagine.

...just revel in Joline Mujica as Tracy Turnblad, singing and dancing her way to fame as Miss Teenage Hairspray, despite the machinations of the hilarious Kim Cozort as Velma Von Tussle, TV producer and all around rat bag and Celia Louise Merendi as her back scratching, eye gouging daughter...  Matthew Ragas plays... Link Larkin with all the right moves... the furiously dancing and singing Ronald Duncan as Seaweed J. Stubbs, whose mother, Motor mouth Maybelle, just happens to be the great Avery Sommers.  And then, of course, it's director David Arisco svelting up the joint in drag, as Tracy's mother, Edna Turnblad...

Thirteen other actors put the meat on the bones of Hairspray ...and they're all damn good.


For the South Florida regional theater debut of the Tony Award-winning 2002 Broadway smash, Arisco has assembled what is simply the finest musical theater cast in town, himself included. And though it isn’t really easy to direct and star in a show, Arisco pulls it off beautifully, with ample help from his inspired choreographer, Barbara Flaten.

...from the abundantly gifted leads to the multitasking chorus, the cast delivers all of the show’s silliness, sweetness and touching truth.

Arisco, a mountain of a (wo)man, cast the diminutive Avi Hoffman as Edna’s supportive hubby Wilbur, and beyond the sight gag that happens every time they’re together onstage, they whip up an adorable chemistry... Mujica’s peppy, ebullient Tracy makes it easy to understand why dreamboat Link falls for her. Kleiner is a comedic gem as Penny, Ronald Duncan an awe-inspiring dancer as her beau Seaweed. As the bouffant-blonde mother-daughter villains, a brilliant Kim Cozort and Merendi demonstrate just how ugly pretty women can be. And big-voiced Avery Sommers, who plays Seaweed’s mama Motormouth Maybelle, goes two for two in stopping the show with each of her showcase songs, Big, Blonde & Beautiful and I Know Where I’ve Been.

Sure, maybe you’ve seen one of the earlier versions of Hairspray – the Waters movie, the Broadway show, the touring version, the 2007 movie musical. But the thrill of watching so many fine South Florida actors making the show their own? That’s worth a fresh, powerful shot of Hairspray.


The tragedy of Actors Playhouse’s lavish and ebullient production of the musical Hairspray is how the muddy, uneven, out of balance, sloppily cued sound on opening night fatally sabotaged what might have been a triumph.

Christine hinted at the sound problems, and several patrons mentioned it to us; but Bill has apparently is through with giving allowances.


That means evaluating this hilarious satire on the music and mores of the early 1960s has to be done through undependably foggy glasses. What can be glimpsed is a promising hoot: a vigorous and talented 26-member cast, a solid pit band, glorious choreography and stunningly silly costumes all in service of one the funniest scripts and scores since The Producers.

...the headline is David Arisco, the Kodiak-sized artistic director doing double duty as the production’s director as well as wearing the double EE bra and bouffant wigs of Edna Turnblad.

He’s especially deft in sidestepping the treacherous pitfalls of playing a woman without winking too hard through the fourth wall. His baritone voice, masculine mug and girth keep the performance appropriately distanced from the half-baked clichés of a female impersonator. Instead, Arisco plays Edna’s growth from someone too self-conscious to leave the house to someone willing to burst onto national television to parade her new-found pride.

But his oddly-restrained performance, as unimpeachable as it is, doesn’t top the list of the show’s virtues. High on that roster is Avi Hoffman portraying Edna’s husband, Wilbur, the gentle and genial joke factory inventor who unreservedly loves a wife who could crush him in one paw. Hoffman’s performance of an irrepressible dreamer is a comic masterpiece.

The show would not work without a sparkplug in the role of Tracy. Here, Joline Mujica, a University of Miami graduate who has played the role twice before, hurls enthusiasm across the footlights, especially when dancing.

In fact, the two true stars of the production are not performers. Barbara Flaten’s high-stepping, sinuous choreography is synthesized from a dozen senior proms and cheesy telecasts... Then there’s Ellis Tillman’s cornucopia of costumes constituting the most wicked yet affectionate satirical statements in the entire show...

Kudos are due, too, to musical director David Nagy and his eight-piece band for recreating the glorious score...

Despite the crippling problems – which may or may not get ironed out by the time you read this — the season opener at Actors’ Playhouse is a bravura, even epic undertaking that has to be applauded.


The Actors' Playhouse production of Hairspray last night at Miracle Theatre made our hearts swell so big with Miami pride that we came close to filling Edna Turnblad's (David Arisco) size triple E bra cups. The small cast poured its blood and sweat into every scene, energetically building and maintaining a playful atmosphere of early '60s innocence from curtain to curtain.

As Tracy Turnblad, Joline Mujica's performance was fantastic. Appearing like a cheery, grown-up Cabbage Patch doll, her precise movements made her interesting to watch, while her perfectly plastic wide-eyed and toothy facial expressions brought back memories of Ricky Lake in the original John Waters movie.

Matthew Ragas... seemed to have been born to play the delicious crooner heartthrob. Handsome and coordinated, he came pretty close to actually making us swoon when he strutted out in his sexy fitted silver-gray polyester suit...

This review wouldn't be complete without a mention of David Arisco's "divine" and understated performance as the large and lovely Edna Turnblad. Making no effort to throw his voice, Arisco still succeeded in playing what we slowly came to accept as the enormous yet feminine matriarch.

Few things have made us laugh harder than watching Arisco dance and sing a duet with Hoffman, the diminutive, jolly actor who played husband Wilbur... the two had an utterly mesmerizing chemistry as they embraced and melodiously assured each other, "You're Timeless to Me." Weird, hilarious, and captivating, all at once.

We could fill pages detailing the obvious effort put forth by each talented cast, orchestra, and behind-the-scenes player. But we'd like to mention one other thing about this show at the risk of sounding like a public service announcement: good for the Actors' Playhouse for choosing a musical that brings some diversity to the stage. South Florida is such a culturally colorful place to live; it's about time we produce and support some popular theater that represents the heterogeneity of our community.

Remind me not to play Scrabble with Camille.

Richard Cameron reviewed for The Examiner:

Joline Mujica (Tracy Turnblad) wins the audience over... Matthew Ragas gives a wonderful performance vocally and physically.  Matthew was in the national tour and is definitely an audience favorite.

All of the ensemble were energetic and brought excitement to the group numbers.

The Actors' Playhouse production of Hairspray plays at The Miracle Theater through November 13, 2011.
Posted by C.L.J.