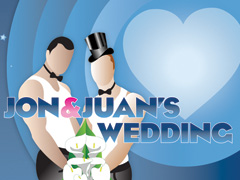 Creative Arts Enterpises' production of Jon & Juan's Wedding opened at the Broward Center for the Performing Arts on October 13, 2011.  The interactive comedy dinner theater is the first play in the Center's new "Pride Series."


Jon Silverman and Juan Rodriguez are getting married--and both families want to do it their way! Join the dysfunctional, always fun, Jewish and Cuban families as they celebrate this fabulous, zany gay wedding with characters galore! From a distraught ex-boyfriend to a spaced out best man and a loud, opinionated Cuban father, these oversized personalities and cultures collide in a flamboyant, outrageous music, food, and dance filled extravaganza.

But unlike most traditional weddings, there’s no bride, but two very adorable grooms.

Jon & Juan’s Wedding is a fun way to spend a few hours, and even the most skeptical might be surprised by their delight. Opening night was sold-out, and the audience/guests seemed to be having a great time, eating, dancing and laughing.

And in its own way, Jon & Juan’s Wedding makes an important statement about love, and the desire for two people to stand up in front of their family and friends and declare their life-long commitment to one another. Jon & Juan’s Wedding is so much like every other wedding, the fact that there are two grooms becomes the least important part of the affair, and the idea of two different families coming together to celebrate love and commitment takes center stage. Jon & Juan’s Wedding underscores that universal commonality, and will leave you wondering why this type of legal wedding is only possible in a handful of states.


To me, quite frankly, interactive theatre, is an artistic endeavor somewhat colonoscopic in its frightfulness.  So it was with a slightly supercilious attitude that I accepted an invitation to the opening night of Jon and Juan's Wedding, a co-production of The Broward Center for the Performing Arts and Ellen L.Wedner's Creative Arts Enterprises...But I needn't have feared, because my involvement in Jon and Juan's Wedding was limited to being asked on entry whether I was a friend of the groom or a friend of the groom.

Fifteen actors played parents, siblings, in-laws, jilted lovers, a wedding planner and an earth priestess, Autumn Leaves Bongwater, who performed the marriage ceremony.  Set pieces with speeches, corny jokes, distraught ex-lovers, flamboyant dances, songs and rellies whaling on each other were performed when the 147 wedding guests were not on the floor, dancing and listening to stuff like “Girls Just Want To Have Fun,” “Dancing Queen,” “The Macarena,” “YMCA,” “Do The Hokey Pokey,” “Hava Nagila,” “Big Spender,” “It's Raining Men,” “On A Clear Day” and the big closer, “I Am What I Am.”

...the one thing that popped out was the sincerity and tenderness of the quieter moments in an evening of music and laughter.

And for two hours everyone had a really swell old time.

Jon & Juan's Wedding plays in the Abdo New River Room of the Broward Center for the Performing Arts through October 23, 2011.
Posted by C.L.J.