New Theatre: Edith Can Shoot Things And Hit Them (4 reviews) 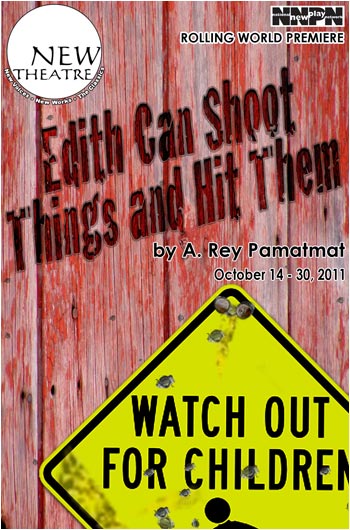 New Theatre opened its production of Edith Can Shoot Things and Hit Them on October 14, 2011, as part of the National New Play Network Rolling World Premiere.


This timely and controversial work examines the lives of two all but abandoned teens having to create a makeshift family and its values while getting through the pangs of growing up.


The three actors are older than their characters, all hold college degrees, but Natasha Waisfeld as Edith personifies a twelve year old and Juan Gonzales Machain as Kenny and John Robert Warren as Benjie simply nail the teenage boys.

I'm not one who particularly enjoys seeing the angst of growing to adulthood but this play, written by A. Rey Pamatmat, directed by Ricky J. Martinez, and with this cast, is a pleasure to watch.


Pamatmat’s quirky play gets an equally quirky production under Ricky J. Martinez’s direction, which mixes laughter and pathos. The writing and acting feel a bit forced and clichéd in spots. But most of the time, Edith is a provocative, even moving vision of the challenges of surviving modern adolescence in what seems a hostile adult world.

Natasha Waisfeld’s performance as Edith is the kind audiences should paste in their memories for future reference. Although she is a New World graduate with a BFA degree, she and Martinez have constructed a completely convincing 12-year-old whose traumatic life experiences have made her wary way beyond her years while still conferring at length with her oversized frog doll.

Juan Gonzalez Machain also is convincing as the brainy brother... On the occasions when Kenny loses his temper or falls apart in the play, Machain shows he has acting range and power, but he’s unable to slip in and out of those modes convincingly.

John Robert Warren has the toughest role as Benji because Pamatmat has saddled him with a stereotypical gay teen down to the hunched shoulders and backpack clutched to his chest, alternately terrified of his sexuality and yet consumed with lust. It’s only when Benji begins to grow as a person in the second act that Warren builds a believable character.


A. Rey Pamatmat’s Edith Can Shoot Things and Hit Them is a strikingly original work...  the stuff of any artistic director’s dreams, a beautifully crafted script from a fresh new voice in theater. At New Theatre, Pamatmat’s play, director Ricky J. Martinez’s staging and an exquisite young cast add up to the best work the Coral Gables company has done in a very long time.

All three actors in New Theatre’s cast deliver pitch-perfect performances that make you eager to see where the kids’ odd journey will take them. Though she sometimes swallows a word or two in the rush of her dialogue, Waisfeld — a diminutive New World School of the Arts college grad — is completely believable as a plucky child. Machain’s Kenny becomes the play’s steady heart. And Warren is a funny, empathetic Benji whose geek dance, as he grooves to a mix tape he made for Kenny, is worth the price of admission.


The play, as directed by Ricky J. Martinez, tells a darkly funny story of abandonment and adaptation, pulled off in a charming but slightly melodramatic way.

Waisfeld, a recent New World School of the Arts grad with a BFA in acting, was disorienting in how accurately she portrayed a willful, loud, and aggressive 12 year old. Without the benefit of her bio, we couldn't have said with any certainty whether the actress was 12 or 22... She stole the show with her slapstick physical comedy, trudging around in over-sized hand-me-downs and aiming her BB gun at every corner of the room.

Gonzalez Machain was an able player, but his tendency to stare out over the audience, seeming to ignore the other actors on stage even when his lines were supposed to be directed at them, made his performance feel overly dramatic and contrived at times.

Warren's character Benji was written with a fun effeminate flair, and the actor did an excellent job at playing the odd combination of painfully awkward geek and self-assured sexpot.

The play, by young playwright A. Rey Pamatmat, is not a blockbuster filled with razzmatazz and acrobatics ... nor is it supposed to be.

It's a fresh work and a valuable tale about a non-traditional American family. It's worth seeing for those who appreciate new American storytelling...

Edith Can Shoot Things and Hit Them plays at New Theatre through October 30, 2011.
Posted by C.L.J.