Caldwell Theatre: After The Revolution (5 reviews) 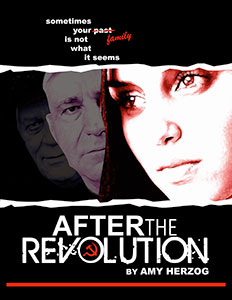 The Caldwell Theatre Company opened its production of Amy Herzog's After The Revolution on October 21, 2011


After the Revolution is the story of the brilliant, promising Emma Joseph who proudly carries the torch of her family's Marxist tradition, devoting her life to the memory of her grandfather, much revered for refusing to “name names” during the McCarthy hearings. But when history reveals a shocking truth about the man himself, the entire family is forced to confront questions of honesty and allegiance they thought had been resolved. After the Revolution is a bold and moving portrait of an American family, thrown into an intergenerational tailspin, forced to reconcile a thorny and delicate legacy.


Director Margaret Ledford paces the action beautifully, keeping every scene compelling and grounded, uncovering subtle nooks of humor and never succumbing to boisterous melodrama or preachy treacle. There isn't a weak link in the cast, though some stand out more than others. McConnell's performance is the embodiment of true beliefs and broken dreams, and Nancy Barnett — McConnell's real-life spouse — is a revelation as Ben's second wife, Mel. Her presence is warm, relatable, and poignantly authentic; she's not onstage nearly enough.

But this production's most genius touch — credit to Ledford and set designer Tim Bennett — is the towering, gleaming backdrop to the action. The story is set largely inside Ben and Mel's home... Images of Che, Marx, and Castro share wall space with family portraits, underlining the inextricable link between politics and family that consumes and divides the play's characters. It is his political beliefs, after all, that have guided Ben's every move, to the detriment of his loved ones.


Herzog has crafted an intriguing if imperfect family drama laced with social, political and historical references, one that resonates no matter what your own family’s world view may be.

Staged with sensitivity and finesse by Margaret M. Ledford, the Caldwell production features a cast of accomplished actors who create (mostly) vivid characters, though some have minimal stage time.

Rivera, a fine young actress, does well in the central role of Emma, though Herzog burdens the character with a childlike petulance.

McConnell and Barnett, husband and wife in real life, radiate a comfortable bond as Ben and Mel. Barnett is so emotionally adroit at playing a key scene about Mel’s own activist past that she gets richly deserved applause as it ends. And McConnell makes Ben a blustering lefty frustrated by his inability to truly communicate with a daughter he so loves and admires.

Though After the Revolution could use sharpening and tightening, Herzog’s warts-and-all look at a particular extended family has enough emotional universality that most theatergoers will feel the pull of its truths and conflicts as they savor its cast’s strong work.


The Caldwell Theatre Company’s season opener is a smooth, polished production ably led by director Margaret M. Ledford and performed by a persuasive cast that features Jackie Rivera and Gordon McConnell as daughter and father.

The most affecting moment occurs earlier when Emma (Rivera) has virtually cut off contact with her family. Her gentle stepmother Mel (Nancy Barnett in a welcome return to the boards) calls to try to reopen communication.

Credit Ledford for her guidance: No one outside the rehearsal room knows what she does to achieve this, but she gets personal bests out of many of the actors she works with.

For instance, Emma is a breakout performance for Rivera, a New World School of the Arts grad best known for playing troubled teens. She is absolutely convincing as a young woman committed to a cause down to her DNA.

McConnell gives another natural, convincing performance as a man facing consequences he had fooled himself into thinking might never come.

Notably, Howard Elfman, trapped for years in one-dimensional roles, recently has had the opportunity to exhibit a range that was always there. But with Ledford, his performance rises yet another level...

As the grandmother, Harriet Oser reminds us how cheated we are not to see her doing more work. Aided by Herzog’s most multi-faceted characterization, Oser and Ledford paint an elderly doyenne whose hearing is fading, but whose steely loyalty to the memory and myth of her late husband is unnerving.

Audiences might yearn for a little more outrage and angst among the Josephs, but Herzog, Ledford and company teach a life lesson about the tragedy of putting politics and pride before people.


Gordon McConnell and Jackie Rivera trying to reconcile as father and daughter, Nan Barnett lecturing Rivera on the phone, Michael H. Small begging McConnell to attend his son's ball game, Howard Elfman bequeathing his fortune, McConnell trying to understand and explain his own father's actions, Harriet Oser clinging to her dead husband's convictions, Arturo Fernandez breaking up with Rivera, Tiffany-Leigh Moskow as Rivera's wild sister...all acting gems on stage at the Caldwell Theatre in After The Revolution.

Taking advantage of every nuance in Herzog's writing, director Margaret M. Ledford and an excellent cast give us a fascinating look at hero worship, and its cost, within a family.

For all the fine work by the other cast members, it is Jackie Rivera, as Emma Joseph, daughter to McConnell's Ben Joseph, who gets the star bow at the curtain call.... Rivera has gone far beyond the happy kid of a couple of years ago when she was bringing down the house in Speech and Debate and A Behanding in Spokane.  She's playing her own age now and that wonderfully entertaining quirkiness of her previous work has matured into a solidity and presence that any might envy.


Jackie Rivera gives a standout performance as Emma... There is a real feeling of her coming of age in handling the disparity between the reality and the idealization of her liberal belief system. She manages the light touches of comedy in her banter with her family with a hand that diffuses the otherwise serious nature of her character. The final reconciliation scene with Gordon McConnell as Emma's father Ben is one of the truest acting moments in the show.

Nancy Barnett has an easy stage presence as comforting stepmother Mel. She and Harriet Oser, as Jo's second wife Vera, turn in performances that lead us to think we have either not seen them enough on stage, or have seen them in roles that didn't highlight their considerable acting skills.

...This production is well directed by Ledford... who manages to draw out the parts of the show that are about familial relationships, the parts that are about political ideology, and the parts where the two conflict to make an interesting story.

Well, let's see what Rod Stafford Hagwood is passing off as review for the Sun-Sentinel:

But what at least feels new in playwright Amy Herzog's "After the Revolution" is setting this old arguing-across-the-dinner-table chestnut against the backdrop of hard-left politics. The acclaimed work getting a handsome production at the Caldwell Theatre Company in Boca Raton was named one of The New York Times' Top 10 plays of 2010.


Nothing is as neat and tidily compartmentalized as Tim Bennett's set, a living room meant to represent different locations with just a suggestion from lighting designer Thomas Salzman...

Does that mean the set works?  Doesn't work?

He says nothing about the direction or the performances, until -

Uh huh.  So, it was a "handsome" production that had a set, lights, and characters.
Thanks for nothing, Rod.
After The Revolution plays at The Caldwell Theatre Company through November 20, 2011.
Posted by C.L.J.