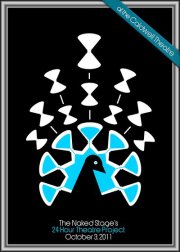 
As Naked Stage artistic director Katherine Amadeo looks on, each will pull the name of a director and a stage manager from two separate bowls, then move to a table covered in sealed envelopes each containing an actor’s head shot. In random order, the playwrights will take turns “casting” by picking up an envelope, one at a time, until each has four. Then they’ll be given a list of play titles suggested by Amadeo, and whoever calls a title first gets it.

The playwrights work all night to have a script to turn over to the directors by 7am Monday morning.  By 8pm, they will be onstage.  This is the greatest theater collaboration of the season; it's all original work, featuring South Florida's best talent, literally the cream of the crop.  It's also a fundraiser for the participating theaters, so it's all in a good cause.

Another Caldwell Team-Up
The Miracle Theatre Examiner reports that Zoetic Stage will be presenting a reading of  Mack Edward's Mirror at the Top of the Stairs at the Caldwell Theatre on October 10.

Let it RAIN
In 1989, I was technical director on a cruise ship.  One week, we were hosting the 50's and 60's Theme Cruise, featuring bands such as The Four Aces, The Drifters, Jay And The Americans (who ended up not performing because Jay left in a snit before we sailed), and a band from California called Rain, who "did the Beatles."  Actually, they did the concert that Beatles never could, and it was the hit of the cruise.

The Sun Sentinel talks with Mark Lewis, a founding member of the band and a creator of the show.


Q. So how did the tribute band morph into a stage show?
We had played clubs, amusement parks, corporate affairs, cruise ships. We wanted to revamp the show so we could have a sit-down in a casino. The idea was to play somewhere for a year or two like a Cirque [du Soleil] show. We got Harrah’s Lake Tahoe for 16 weeks. So we needed to make the show more of a production. We need to do more of the career of the Beatles and costume changes and building sets and props — more eye candy, basically. Like I said, we were originally supposed to be there for 16 weeks and we ended up staying for two years.

Rain: A Tribute to the Beatles opens Tuesday at the Broward Center for the Performing Arts, and plays through October 16.

Also At Broward
The Miracle Theatre Examiner tells us about an interactive theater experience opening soon at the Broward Center for the Performing Arts: Jon and Juan's Wedding.


Looking at the upcoming theater season in South Florida, you would never know that we were in the midst of a sluggish economy.

Finding The Next Shakespeare?

The Drama Queen reports that Miami Children's Theater is holding workshops for children who want to learn to write plays.

In Other News
Florida Theater On Stage touches on a variety of news briefs, including the report that A Funny Thing Happened on the Way to the Forum won't move from Stage Door's theater in Coral Springs to its space in Miami Beach, Jan McArt is presenting a reading of Tony Finstrom's new play, and more.

More Other News
The Miami Herald reports that Kathryn Garcia, "a top director of programming" at the Arsht Center (how many directors of programming do they have??) to head the performing arts series at Miami-Dade College.  The same article reports that New World School of the Arts will be presenting their production of Spring Awakening at The Colony theatre this coming weekend.

They Just Don't Get It
The City of Hollywood Whistle Blower thinks the city should let go of the Hollywood Playhouse.  Apparently, they should do this because the city commission revoked a city employee vision plan.  Of course, a performing arts center offers a significant return on investment; anywhere from 8 to 12 dollars for every dollar put into the PAC.  That would offer a boost to the local economy that could allow the city to fund more benefits for its workers.
Not to mention the jobs that would be created by having a full time theater in operation.  Theater jobs are jobs, too.
Posted by C.L.J.