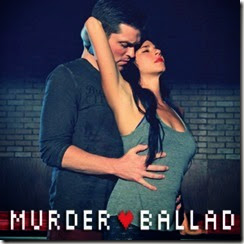 Actors’ Playhouse opened its production of Murder Ballad at the Miracle Theater on October 8, 2014.

Enter the passionate and violent world of a Lower East Side Bar and a Love Triangle gone wrong. MURDER BALLAD centers on Sara an Upper West-Sider who seems to have it all, but whose downtown past lingers enticingly and dangerously in front of her. Featuring a contemporary pop-rock score and a setting where the audience is placed in the bar and up close and personal with the actors, this sexy, explosive new musical explores the complications of love, the compromises we make, and the betrayals that can ultimately undo us.

Every couple of years, Actors’ Playhouse – home of the mainstream musical – says what the hell and mounts an edgy modern work that nourishes the creative soul of artistic director David Arisco and the theater’s more adventurous patrons… Add to that list this production of the off-Broadway cult rock opera Murder Ballad that mixes love, lust, loss, passion, fury, pain and violence in a fatal triangle as old as Mankind but as current as last week’s tabloid.

Mercilessly insightful lyrics about a doomed search for self-validating love and excoriating driving music are delivered with courageous abandon by a quartet of highly skilled musical theater actors, whipped on by Arisco who has posted what may be a personal best in staging.

The superb actors wring out every drop of toxic emotion with their bravura voices, their agonized facial expressions, their sensual body language without ever overacting or hitting a false note. Gruda may be remembered as the sister in Floyd Collins or Songs For A New World). Crawford spent last season in Zoetic’s Assassins and Dramaworks’ The Lion in Winter. Sanders was the father in next to normal and the standout, pouty sullen Torres, is a standout from New York originally from Miami.

Arisco creates memorable tableaus with the scenery he’s given… his command of movement without a choreographer is unparalleled.

Staging a show in the round is always a challenge and Arisco ensures most audience members never feel that they are seeing the actors’ backs too often. Even with performers singing to each other from the far ends of the performing area, he invisibly directs your attention where it should go, helped by Eric Nelson’s nimble lighting.

The rest of the creative team is also working at the top of their game. Mitch Furman’s sound makes every lyric crystalline. Ellis Tillman created costumes that seem as if they just came out of a Soho closet but which illuminate their personality. Gene Seyffer’s set design and Jodi Dellaventura’s set dressing/ props create the environment that must stand in for so many locations. This sung-through work is also a triumph for musical director Eric Alsford plus his whipcracking band Martha Spangler on bass, Roy Fantel on percussion and Sandy Poltarack on guitar.

Frankly, this may be one of the most original and entertaining offerings Actors' Playhouse has ever presented, and considering the theater's 27-year history, that's saying really saying something.

The usual accolades can be called upon for inclusion here -- "sexy," "seductive," and in this case, "superlative," but in fact, those adjectives only begin to describe this intimate encounter. The first thing that strikes the audience on entering Actors' Playhouse Balcony Theater is the stunning set by Gene Seyffer. The upstairs theater's usual standard seating has been totally uprooted, with the entire space transformed into an expansive recreation of a Greenwich Village tavern, complete with vintage wall decor, a working bar, guest tables, and a pool table.

…the songs are uniformly compelling and serve a much better purpose than merely moving the story along. Thankfully too, the lean but capable four-piece band under the direction of Eric Alsford is also adept, neither too showy nor too subdued when it comes to giving the score its due.

Gruda, Crawford, Sanders, and Torres are all accomplished singers, as good, in fact, as any to be found in any musical, on Broadway or off. Torres is especially magnificent, with a voice that can wail with anguish or emote as needed to guide the developments along. Artistic director David Arisco, whose diversity and daring when it comes to tackling new works is a marvel in itself -- again rises to the challenge of overseeing what could otherwise have been a calamity of confusion and missed and muddled cues. It's evident once again that Actors' Playhouse is indeed fortunate to have him and, that he, in turn, is also blessed to have the theater's palate of presentations to work with.


Actors' Playhouse described their new show as immersive. And that it is. Any more immersive and skivvies and bras would be hanging from the chandeliers. ...this is "Murder Ballard," the pop rock opera (well, almost) that puts the audience in the lower Manhattan neighborhood bar where the bartender and his girlfriend do the horizontal hoo hahs on the bar top, the billiards table and anywhere else that won't knock the patrons off their stools.

And is it any good? I'll say. Four wonderfully physical actor/singers backed by a driving band build the pressure from the first minute to the eightieth. No spoken words here, just ballads and belts telling the oldest tale of them all.

It's slick direction from David Arisco as he moves his players around, on and under the furniture. Fearsome fights and lusty maulings. Oh, how the other half lives.  And these people can sing. Beautifully. Whatever it takes.

Actors' Playhouse has transformed their upstairs balcony theatre into the neighborhood hangout, the King's Club, complete with bandstand, bar, billiards table, and patron's chairs and tables. A major effort done well. A few rows of regular seating surround the stage, but if you want to see and feel the sweat, hear every brilliant note, just become part of the show, then grab a table and be prepared for a rare and exciting evening.