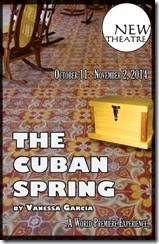 Penned by local playwright Vanessa Garcia, this family drama revolves around secrets, identity crisis of a separated generation, and the sacrifices one must go through to live in democracy.

The overall picture may seem a bit disjointed and fuzzy, but the world premiere of The Cuban Spring at New Theatre incisively depicts the complexities of Cuban-American families in modern Miami as their American-born generation conflicts with parents struggling with ghosts of their birthplace

Garcia doesn’t break new ground for anyone living the dilemma, but her valuable insight is that neither generation’s feelings are as simple as outsiders might believe. Some émigrés have desperately mixed feelings about returning and their children are increasingly intrigued at newly-opened opportunities to see the Old Country.  She documents the inevitable clashes with a three-dimensional vibrance, a sense of assured authority and an ability to elicit empathy for those caught in the vise.

While some characters initially seem archetypes, director Ricky J. Martinez and a cast of skilled actors inject that necessary third dimension from the very first scene — essential for the play’s success because the characters don’t gain depth until Garcia starts revealing secrets that add layers to these denizens.

Martinez has cast the show beautifully. Orizondo, one of our favorite and rarely seen actors, brings a wonderful believability to the hangdog Miguel’s still bleeding heart. Perez has been playing a riff on this voluble matriarch for years, but never better than here. Duckart injects a wild card energy and vitality into the proceedings. Henry, one of the region’s best actors, is just as believable in his angry frustration at his wife’s crippling angst as he is in his abiding love for her.

Last but not least is former New Theatre mainstay Bravo who hasn’t been seen locally very much, so this is a welcome return home. From her first intense monologue about a dream of giving birth, she is a force of nature. She is totally American with a driving Type A personality that Bravo and Martinez are not afraid to make actually a touch off-putting. She can be dismissive of tradition while still honoring it.

Receiving its world première at the New Theatre, "Cuban Spring" has a veteran cast handling the anguish of those American born Cubans unable to visit Cuba, not because of political restrictions, but because of the ingrained resentments and longings of their own family members.

Well directed by Ricky J. Martinez, this is a play about secrets, husband and wife, parents and child. Playwright Garcia has filled her two acts with incident after incident; there are monologues, yes, but this is not a talky affair. It's a different and interesting look at the dreams and secrets of expatriats in Miami.

Tanya Bravo excels as Siomara, the edgy, newly pregnant wife of John, a black man who dragged himself from the gutter to success in the white world and who knows no Spanish and understands little of Cuban culture. Ethan Henry, with his wide range, gives a fascinatingly frustrated portrayal of John. Miguel (Carlos Orizondo) and Olga (Evelyn Perez) are Siomara's parents, Orizondo quietly grounded and well loved and Perez bursting with enthusiasm and care for her family. Nick Duckart (Dionysus) is Miguel's brother, loudly bilingual, ready for any adventure, unfortunately with less stage time than the others and that's a shame, for Duckart always entertains.

"What does it mean to be a Cuban American? This is only one of the questions that playwright Vanessa Garcia posits in her play, The Cuban Spring. On another level the play is about familial ties to country as well as loved ones

Perez, Henry and Duckart give the play its gentle humor. Perez's Olga observes that her daughter is on the "ninth cloud" instead of cloud nine. Duckart's rhythmic accent on top of a fast delivery also adds to the play's comedy. Henry's reaction to his new found Cuban family contrasts with his upbringing as an African-American from Mississippi also makes for some delightful moments. He reminds them, for instance, that black is black no matter where the person is from Cuba, Hawaii or the deep South.

Director Ricky Martinez understands that a change in pace is necessary to keep the story moving. He directs his actors to deliver lines at times tersely and at other moments poetically. Bravo's face positively glows in her more poetic moments alone onstage. Martinez's actors deliver these divergent aspects with a delicacy and a deftness that is noteworthy.