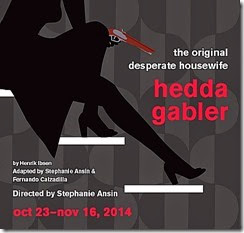 Passion. Deception. Betrayal. Experience one of the most captivating and tortured heroines in history. Don't miss this new adaptation of the world-famous drama about a reluctant housewife rebelling against the prison of stability.

An adaption of Henrik Ibsen’s classic play  by Stephanie Ansin and Fernando Calzadilla.

…MTC’s engrossing undertaking features compelling performances, fine-grained direction and the impressive visual theatricality that MTC became famous for when it was known as The PlayGround Theatre mounting plays for student audiences.

Ansin’s script is awash in modern vernacular because she felt the dialogue in every translation felt baroque. That’s distracting because Ibsen likely never wrote anything directly translatable to Ansin’s “Whatever” or “So you want to be the alpha dog?” On the other hand, the actors say the lines so smoothly (which was Ansin’s goal) that they sound natural.

She and Calzadilla use heightened theatricality even in this somewhat naturalistic play… But they take stylistic techniques one step too far with Luciano Stazzone’s techno score. Stazzone has been an integral collaborator in PlayGround’s previous sensory-stimulating productions. But here, the music undercuts taking the events seriously.

But Ansin’s physical staging is textbook perfect. The way she places her characters on the set and moves them about are silent but clear indications of roiling relationships. Without drawing attention to it, her characters idly swing from stairway supports or sprawl on steps. Even where people sit on a sofa – hemming each other in or keeping their distance – is an intentional choice. Nothing is accidental, but nothing feels artificially forced.

Some of the actors outshine their previous work seen here. Jessica Farr, a playwright as well as an actress for Mad Cat Theatre Company, has never been better locally than in this courageous creation of an unlikable Hedda. Her Hedda is a caged panther prowling for meat, striking not so much out of malice as from the almost physiological need to dispel boredom.

Tei has focused so much of his time as artistic director of Mad Cat that it’s easy to forget what vital, vibrant actor he is. His Eilert Lovborg is at first a former hedonist proudly clinging to his reformation and then an unhinged soul staring at an oblivion of his own making.

The discovery of the show is John Dennison who seems to have spent much of his career in community and small regional theaters. But his urbane, lupine and quite likely bisexual Judge Brack is a tuxedo-smooth voraciously carnal carnivore.

Local stalwart Gregg Weiner has the thankless role of Tesman... Weiner makes a perfectly convincing fella next door who loves his glamorous and demanding wife.

After its first foray into classic theater with Anton Chekhov’s Three Sisters in late 2012, Miami Theater Center is again delving into a great work with Stephanie Ansin and Fernando Calzadilla’s adaptation of Hedda Gabler. The production, with a set, costumes and lighting by Calzadilla, taps into Miami Modern style and is visually quite striking. But enthralling? Not so much.

In this Hedda Gabler, empathy for the title character is elusive. Moving glamorously around her fish bowl, Farr is forced to freeze in the spotlight now and then, widening her deep brown eyes as composer Luciano Stazzone’s original music swells, silently communicating her innermost despair. It’s a version of a device Ansin used in Three Sisters, but it doesn’t add softness or complexity to a character who comes off as spoiled, bitchy and more than a little crazy.

Weiner, a fine actor who can play volcanic with the best of them, is true to the constraints of George’s milquetoast character, amiably bland. Garle, lovely and lost as Thea, plays a different kind of desperate housewife who clings a little too readily to George in times of crisis. Dennison has much more to work with as the creepy Brack (he lacks only a mustache to twirl), and whenever Tei appears, he energizes the entire production in a way that will make you wish Lövborg had a lot more stage time than he does.

That the artists at Miami Theater Center are devoting their creativity and energies to making the classics come alive for new generations is an admirable and important part of the company’s mission. If only Hedda Gabler were a bit more heady.


Henrik Ibsen's classic Hedda Gabler is a steamy piece about a bad girl, husbands, lovers and pistols. And sex. Of course.  Miami Theater Center's adaptation of Hedda has all the above, but lacks one small, additional item. Soul.

The music and lighting, although well done, telegraph every rise and fall in the action. We have been warned. And that's where things start to come apart. This version of Hedda Gabler is all about, "Look how clever and different we can be."  All the drama is in the presentation. The set, the lights, the music, all hammer home the obvious.

Hedda, played by Jessica Farr, seems to be locked in a bad silent movie. The exaggerated poses, the knowing stares at the audience, the silences. I'm guessing this is the director's choice. It does the actress no favors.

Even the excellence of Gregg Weiner as Hedda's husband George Tesman and Paul Tei as her sometime lover Eilert Lovberg cannot bring life to the prosaic dialogue and direction. The others in the cast... fare no better.

There's no pleasure to be had from ripping a play. One leaves the theatre disappointed. The buildup to this Hedda Gabler has been large, the rehearsal period lengthy, the mounting exquisite at times, but ultimately the lack of true emotion negates all these artistic efforts.


Hedda Gabler can be an extremely disturbing and moving piece of theater when done well. Unfortunately, Miami Theater Center's production misses the mark and Ibsen's drama almost delves into comedic camp at times.

The standout performers of the evening were Kate Young as Aunt Julia Tessman and Kitt Marsh as Berta the maid. Young and Marsh both delivered fine, understated and realistic performances in their supporting roles. The rest of the cast suffered from miscasting and blatant overacting.

The script... doesn't seem to be a complete reworking as there are moments when you have very 19th century dialogue, such as references to a "carriage" as opposed to more modern forms of transportation, juxtaposed with current colloquial phrases such as Hedda exclaiming "Whatever!" in frustration at one of the other characters.  The script has also been significantly cut and changed in such a way that Hedda's back-story, which is the principal motivation behind the character, has been removed or ignored.

Jessica Farr may one day make a very good Hedda Gabler, but in this incarnation, she plays the role more as a spoiled, slightly insane young woman rather than the tortured and truly lost soul that one would normally expect in this role. The moments of spotlight posing were too over the top... Once again, the fault with this may lie with Ansin and Calzadilla's direction and concept rather than with the actor.

In the role of George Tessman Gregg Weiner seemed uncomfortable and unsure. His Tessman felt more like he belonged in the cast of "Everybody Loves Raymond" than in a library as a researcher.

Perhaps the most mystifying casting choice was Paul Tei as Eilert Lovborg. Tei was also saddled with what has to be the ugliest and most inappropriate costume in theater history. The character of Lovborg should be someone that can make two married women desire him with unquestionable passion. Tei, in his pants with patches and one leg six inches shorter than the other, looked more like a hobo than a well-educated man. It was hard to believe that both Hedda and Thea Elvsted, played by Diana Garle, would sacrifice their lifestyles for this man who looked like he crawled out from under a bus stop. Acting wise, Tei was as over the top and scenery chewing as the rest of the cast.

What should have been a very riveting and emotional evening of theater was turned into an evening of somewhat comical camp... The concept became more important than the piece itself and in the end, it didn't work.