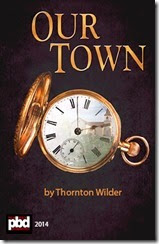 The beauty of ordinary life is celebrated in this Pulitzer Prize-winning play, as the citizens of Grover's Corners experience birth, love, marriage, and death, and the attendant joy, heartbreak, and transience of being alive.

For such a seemingly simple play, Our Town requires the audience to generously invest their attention and imagination. Thornton Wilder’s classic set in a small town in New Hampshire only works when its visitors travel more than halfway there.

But for those willing to make that journey, the gossamer delicate play can vibrate the heartstrings and the synapses, as it does in Palm Beach Dramaworks’ deft production.

Hundreds of third-rate productions by high school and amateur theaters have flattened it, hyped it and botched it by playing it too condescendingly cute or too ham-handedly literal or any of a dozen other potential missteps.

But resident director J. Barry Lewis and his troupe of 21 thespians – the most ever on a Dramaworks stage – hit that elusive sweet spot.

Besides the insightful leadership of Lewis, the play features an ensemble of actors, most reunited having played at Dramaworks on and off throughout its history… All create recognizable types in any community, yet invest each with a specificity and uniqueness that keeps them from being cartoonish stereotypes.

Kiser, in particular, is perfection as the mature-for-her-age youngster, then the awkward lovesick girl and then the toughest challenge as the deceased Emily who is stunned at what she learns about life. In a speech usually mangled by high school student actors, Kiser movingly bids farewell to Life as exemplified by acknowledging such shards as sunflowers and clocks ticking.

Holding the center ever-so-gently is Colin McPhillamy, so brilliant in Exit The King last year, creates a chatty genial persona for the Stage Manager. His slow high reedy voice bespeaks a veteran observer who has been a de facto philosopher for years without ever thinking of himself as one.

Lewis is best known for his ability to plumb and communicate the most intricate depths of intellectually complex works. But here he has simply dove deep into the emotional truth of the work. Although he certainly has shown an ability for moving people around the stage without calling attention to his work, the theatricality of this piece allows him to create some striking stage tableaus.

…Dramaworks’ stage mirrors the 1938 original. Scenic and lighting designer Paul Black has created the unadorned backstage of a 1930s theater, complete with bare brick back wall and weather-worn wooden catwalks under an iron girder, much of it evocatively painted by Rebecca Pancoast. The scenery is just plain tables and chairs left over from a rehearsal. The attention to detail is stunning down to broken slats in the vent for an air handler.

There may never be a perfect mounting of Our Town. It is a work of genius but it always gives you the sense that a better production is out there somewhere. It’s almost an unattainable goal for theater artists that they, thank goodness, never stop striving for. But Dramaworks certainly has delivered one of the deepest and most satisfying runs at it than we’ve seen in this region in a long, long time.

The classic play is being given an unpretentious and thoughtful production guided by J. Barry Lewis at Palm Beach Dramaworks in West Palm Beach. - See more at: http://www.palmbeachdailynews.com/news/news/local/dramaworks-our-town-classic-beautifully-staged/nhmXz/#sthash.F36YcU9Q.dpuf

The classic play is being given an unpretentious and thoughtful production guided by J. Barry Lewis at Palm Beach Dramaworks in West Palm Beach.

The 21-member cast features many Dramaworks veterans and some of the finest players in South Florida. They include Elizabeth Dimon, playing the motherly Julia Gibbs; Margery Lowe as the gossipy Mrs. Soames; and Dan Leonard turning his dry wit to the portrayal of Charles Webb.

A welcome newcomer to Dramaworks’ stage is Emiley Kiser, playing Emily Webb with effortless radiance. Emily’s life and death provide the through line to the story. Our tour guide is Colin McPhillamy, portraying the stage manager with folksy matter-of-factness.

The show is not without humor. Leonard’s dry delivery of Charles Webb’s advice to George before his wedding is LOL funny. But the message to live our lives to the fullest while we can keeps surfacing to the end, when we’re wished a good night’s rest — a metaphor for the eternal rest that comes all too soon.

True to its promise to provide “theater to think about,” Palm Beach Dramaworks opened its 2014-2015 season this past weekend with Thornton Wilder’s unadorned but hauntingly personal play, Our Town.

The inhabitants of Grover’s Corners include some of South Florida’s best-known thespians...

In their roles as George and Emily, Ferrarelli (in his professional debut) and Kiser are exceptional and very natural. They both aptly display a grasp of emotions perfectly suited to their parts.

Dimon warmly depicts Mrs. Gibbs, and Kay’s occasionally stern demeanor is nicely juxtaposed with Dimon’s loving touch. Patti Gardner plays Mrs. Webb with a charming flair. As her husband, Dan Leonard can also be stern, but is clearly a soft touch. The way he comforts his daughter’s fears before her wedding is delightful.

Adding finely observed touches are Michael Collins as Simon Stimson, the choirmaster whose drinking problem is spoken about in whispers; Lowe as Mrs. Soames, a friend and neighbor who adds a comic touch during the wedding by commenting over and over to the audience about how beautiful it is, and Felix as Professor Willard, whose geology-obsessed cameo is a hoot.

Director J. Barry Lewis draws fine work from all the players in this now-classic work of the American stage, and Dramaworks’ production lets Wilder’s austerely presented but powerfully realized slice of life speak for its eloquent self.


Leslie Gray Streeter wrote for the Palm Beach Post, who obligingly hid it behind their obscenely expensive pay wall:

“Our Town” is one of those classic American works whose power comes in its seemingly benign nature. Some seven decades after its debut, Thornton Wilder’s look at the cycle of life in a quiet New England town might seem as sleepy as Grover’s Corners itself. But as Palm Beach Dramaworks’ current adaptation proves, its emotional gut punch sneaks up on you in the quiet.

The play is traditionally performed on a minimal set, without props, so Paul Black’s hauntingly spare design — a stark wooden scaffold with two descending staircases — becomes a character itself... The very spareness of it is wrenching, because Wilder’s words, the competent actors and the imagination of the audience are enough to conjure the details of small town life as reliable as the newspaper and milk bottles delivered to the Webb and Gibbs families each morning.

Kiser, particularly, is heartbreaking as she navigates Emily’s life stages and begs to reverse them, helplessly, against the inescapable things that the other townspeople, and Wilder, and the audience, know must stand.

Dramaworks breathes new life into this reliable work, making even its inevitability fresh and stirring.

Glad we only spent a buck.  $15 bucks a week?  The Post publisher is smoking crack.  We don’t pay that for our NYT digital subscription.

The blog Lacunae Musing caught the show, and it's a far superior critique:

In celebration of Dramaworks’ 15th season, it has staged a beautiful, memorable rendering, with the largest cast in its history, many veterans of other Dramaworks shows.

Although it is the traditional minimalist set, with no props other than the chairs and tables... It is evocative of New England. It speaks of earlier times, a simpler way of life, but life, nonetheless, as we all still live it in all its cycles.  The minimalist set asks us, the audience, to use our own imagination, enter the play, and to fill in the blanks.

So why does this play never tire, in spite of the number of times we’ve seen it? It is a play about everyman – us – and it is a celebration of what it means to be part of a community. It’s about the transience of life, something we become increasingly aware of as we age, putting our brief humdrum existence in context (“The cottage, the go cart, the Sunday-afternoon drives in the Ford, the first rheumatism, the grandchildren, the second rheumatism, the deathbed, the reading of the will. Once in a thousand times it’s interesting.”). It is a call to find beauty and meaning in the ordinary.

How fitting that the Stage Manger role should go to Colin McPhillamy… He is the consummate actor (and fellow blogger). He gives a tour de force performance inhabiting the role of the authoritative, omniscient guide for the audience, easily transitioning to briefly becoming a character in the play and then back again as the “stage manager.”

Emiley Kiser, a Dramaworks newcomer, plays Emily Webb... Emiley Kiser is the kind of actress who just radiates her youth, making the transition from teenager to young adult on stage, the perfect choice for the fabled girl next door in the mythical town of Grover’s Corner.

Ferrarelli plays his role with the breathless expectation of the future, a life with his childhood (albeit secret) sweetheart, one that he takes for granted will last, well, forever.

The other major roles are all played by Dramaworks’ veterans and their experience and love of working together shines in their professionalism.

…special mention should be made about the lighting, designed by the same person who handled the scenic design, Paul Black. With lighting, he captured the characters bathed in moonlight, drew the audience focus to certain characters while keeping others in dappled shadows, and making the characters in the cemetery seem, well, other-worldly. The lighting was not obtrusive, but greatly enhanced the production. Costumes of the period were spot on, thanks to Robin L. McGee’s efforts and when you needed to hear that railroad in the distance, sound designer, Matt Corey was right on cue. Indeed, it’s these little things that help make a brilliant professional production.

Finally, it takes a special director to bring all of these elements together into a seamless, fulfilling creation. J. Barry Lewis had never directed Our Town during his long career and it took a confluence of events… a theatre company reaching maturity, with actors uniquely qualified for the roles, and professional designers and a stage well equipped to bring out all Thornton Wilder intended. A deft director’s hand is critical to avoid the sense of sentimentality and to focus on the weighty universal truths behind the cycle of life of the play’s characters. He is careful to capture the humor Wilder interjects here and there as well as to counterbalance the tragic elements.