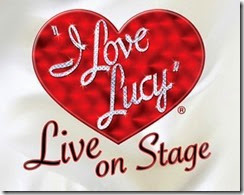 The national tour of I Love Lucy Live on Stage opened at the Adrienne Arsht Center for the Performing Arts on September 30, 2014.

It’s 1952 and you are a member of the studio audience awaiting the filming of two hilarious and oh-so-familiar I LOVE LUCY® episodes. Imagine stepping back in time onto the Desilu Playhouse soundstage where a charming host entertains and enlightens you to the behind-the-scenes filming process, the 1950s hi-fidelity technology and this brand-new thing called “television.” The episodes begin and you witness, firsthand, the side-splitting antics of that crazy redhead in the Ricardo’s New York apartment and thrill to the Cuban sounds of “The Ricky Ricardo Orchestra” at the famed Tropicana Nightclub. In-between scenes? The Crystaltone Singers perform live advertising jingles of the show’s newest sponsors in perfect '50s-style harmony. Can you say “Brylcreem?!”

Don’t let the ® prominently displayed in the title fool you. There is little evidence of the irrepressible vitality and downright hilarity of Lucille Ball®, Desi Arnaz® or I Love Lucy® to be found in this reasonably well-intentioned, well-acted and well-produced offering.

That’s because Lucille Ball and Desi Arnaz were near geniuses and their iconic carefully-tailored show was lightning in a bottle that simply cannot be replicated or done justice with an affectionate homage. “Inimitable” means cannot be imitated. And nobody has ever successfully recaptured what Ball and Arnaz did. So it’s not remotely fair to ask such genuinely talented hard-working performers as Thea Brooks (Carnegie Mellon-trained) and Miami’s own Euriamis “E.L.” Losada to compete or be compared with ghosts still fresh in our memory.

Brooks is in there pitching the whole nine innings as Lucy Ricardo. She has obviously studied clips, so she has down cold the feigned crying jag (“Waaaah!”), the rubbery grimaces, the bright shining eyes and much of the comic timing. Her physical abandon and her voice are in the neighborhood if not perfectly on the mark. But she isn’t and can’t be Lucy who organically exuded a lovably hapless yet never-say-die plotting quality that’s just injected here.

Losada, who won two Carbonells before moving to L.A., was always handsome and engaging, but he has grown into his looks, and he is now a stunner. He exudes a warm charisma when he smiles at the audience and his fine singing voice does justice to “Babalu” among other numbers. The Cuban-born Losada bravely embraces Arnaz’s ego-free mocking of his Cuban accent (“We are happy to mit you.”) But we remember Losada’s fine performance as Edmund in New Theatre’s Long Day’s Journey Into Night. This gig doesn’t tap a tenth of his acting chops, not even his comic talent.

Kevin Remington as the uber-curmudgeon William Frawley/Fred Mertz and Lori Hammel as the Thema Ritter-dry Vivian Vance/Ethel Mertz are also doing what they can, but they simply aren’t able to summon up the ghosts of these superb character actors or their characters.

In retrospect, I Love Lucy® Live On Stage isn’t a bad show, it doesn’t even feel exploitive, everyone’s trying. But you quietly keep asking all night why take up a slot in Broadway Across America’s season with this.

The reenactment of two actual episodes from the beloved 1950s television sitcom I Love Lucy is a delight. The new material — the patter of the warmup guy/announcer, live commercials for Halo shampoo and Chevrolet and such, a mini-hit parade and song-and-dance numbers — aims at pushing nostalgia buttons but comes off as pure filler. It’s as if writer-adapters Kim Flagg and Rick Sparks took a pair of precious pearls (the Lucy episodes) and placed them in a setting made of tin.

Sparks, who doubles as director, helps his key quartet of actors find the vocal and physical nuances that are vital to bringing the episodes to life. Under his guidance, all four find that sitcom groove, knowing when to exaggerate for comic effect and when to pull back.

Slender, charismatic and forever frustrated by the wife he obviously adores, Losada’s Ricky is an accomplished singer-actor-musician, and his strong Cuban accent (something Losada simulates perfectly) gets played for laughs. Vocally, Brooks doesn’t sound much like Ball, but she nails Lucy Ricardo’s mock crying, and she’s fabulous at physical comedy. Remington and Hammel shine when Fred and Ethel resurrect an old vaudeville routine for a producer, their thirst for the spotlight just as enduring as Lucy’s.

The idea of tapping into the enduring affection for I Love Lucy by having actors perform episodes written by Jess Oppenheimer, Madelyn Pugh and Bob Carroll Jr. isn’t a bad one, particularly when the actors are as good as Losada, Brooks, Remington and Hammel, who rise to meet the challenges of the original material. But the new stuff isn’t witty, ironic or particularly enjoyable. It’s mundane, which is something I Love Lucy was not.

I LOVE LUCY LIVE ON STAGE tries to replicate the experience of those old TV show shoots. Show runner Maury Jasper (Mark Christopher Tracy) warms up the audience, singers entertain during set and costume changes, and commercials are performed live---the life-size tube of Brylcreem and the tap-dancing Speedy Alka-Selzer mascot are goofy fun.

Period costumes, wigs and make-up help Lucy and Ethel look their parts, but that's about as deep as it goes. Ethel Mertz (Lori Hammel) for some reason has a southern accent, odd since Ethel is from Albuquerque. Thea Brooks gets a lot of things right as Lucy Ricardo---the signature expression when she's been caught in a scheme, the klutzy dance numbers, the horrible, off-key singing. But she lacks Lucy's vulnerability, the very thing that makes the TV audience love her so much. Brooks' portrayal of Lucy is fraught with an off-putting haughtiness that makes one wonder why Ricky puts up with her. Kevin Remington fares better as Fred Mertz, he looks and sounds like the curmudgeonly, vaudeville-loving landlord.

But the show belongs to Euriamis Losada. The Miami native was a popular and critically acclaimed actor, winning two Carbonell Awards for Best Actor in a Musical for BAT BOY and JEKYLL & HYDE, before he moved to Los Angeles several years ago. Not only does Losada play the real-life role of Local Boy Makes Good, but he nails the on stage role of Ricky Ricardo so precisely, it's as if he were channeling Desi Arnaz.


It's not that it's a really bad show; it's big but it's lighter than cotton candy. Ever tried to chew that stuff?

It's a ninety minute one-acter with, unfortunately, no highlights. Euriamis Losada as Ricky Ricardo comes closest. He looks, talks and sings like the original and his Babalu is just terrific, but far too short. Much less of Mark Christopher Tracy as the Desilu Playhouse host who spends endless minutes on the hokie audience warmups and more on the Losada talent would be aces here

As for the two episodes being filmed live in front of us… well, they're kind of fun… for a while. But the old shticks are just that: old shticks. The leads try hard to emulate the originals, and Kevin Remington and Lori Hammel as Fred and Ethel Mertz do well. But Thea Brooks as Lucy doesn't quite make it. She's tall, she's slim, she moves well and has all the Lucy mannerisms but she lacks the innate humor of the original. She's acting and it's evident.

On the bright side: Brilliant costuming, excellent music from the six piece band.


“I Love Lucy Live on Stage” never really says anything. Faithful re-creation is nice for a memorabilia convention, but if you’re going to call it “theater,” then you have to reveal some dimension. The musical-comedy has an opportunity when Ethel “accidentally” drops a line, Fred grumbles, and Lucy and Ricky move in with cool efficiency to set things straight. But the moment is never mined, evaporating into nothingness within seconds.

Interestingly, in this stage version, Ricky gets most of the laughs. The actor playing the part — Euriamis Losada — is from Miami, but that’s not it. He doesn’t push too hard, letting the material breathe. The audience on opening night ate it up like a TV dinner.


The national tour of I Love Lucy Live on Stage plays at the Adrienne Arsht Center for the Performing Arts through October 5, 2014.
Posted by C.L.J.