Outré Theatre Company: Back of the Throat (3 reviews) 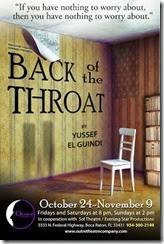 Outre Theatré Company opened its production of Back of the Throat at the Sol Theater on October 24, 2014.

El Guindi’s Back of the Throat is an unflinching and Strangelovian look at the post-9/11 stripping of Americans’ rights in the name of security. Khaled, an Arab-American writer, finds himself the target of a “casual” inquiry by two government agents. But as rumors swirl and grudges are exposed, the darkness behind such governmental euphemisms as “person of interest” and “extraordinary rendition” is revealed. Far from being preachy, El Guindi’s play asks the simple question: when they come for you, who will be your voice?

…Outré, operating on a shoestring and specializing in edgy work with a social message, has outdone itself with the best offering of its three-year history – a production so powerful that the opening night audience just sat stunned in their seats after the lights came up.

The performances under the sure guidance of artistic director Skye Whitcomb are perhaps the best we’ve seen from everyone involved, especially Rayner G. Garranchan as Khaled, and the always superb Jim Gibbons as Bartlett, the iron fist in a velvet glove interrogator, and Tim Gore as his terrifyingly implacable and methodical partner Carl.

El Guindi, an insightful playwright from Seattle, is not out to demonize the institutions with a one-dimensional screed. The play is an object lesson in the consequences when society’s tacit approval or even indifference enables abuses that counter what we profess to believe in… an interesting resonance arises when the interrogators have jettisoned their humanity with almost the same ends-justify-the-means we-have-been-driven-to-this logic that the terrorists themselves use – each extremism engendering the other in a symbiotic dance of death.

The playwright carefully constructed this dance with ever-morphing tempos and Whitcomb has matched it step for step. His verbal and physical staging is appropriately fluid. Whitcomb and assistant director Sabrina Lynn Gore have not paced the journey in the sense of it being fast or slow, so much as tightening and loosening and then tightening again the feeling of encroaching doom. With his actors, he has created tones that range from pleasant to threatening. The evening feels like a blind man desperately trying to find an escape from in an ever shifting labyrinth. He also moves the action cinematically between the interrogation and flashback scenes with very different witnesses, all inhabited convincingly by the wonderful Faiza Cherie.

Garranchan creates a protagonist so breathtakingly ordinary that we cannot help but identify with him… bit by bit, with Whitcomb’s guidance, Garranchan ramps up the anxiety with a literally open-mouthed expression of amazement and fear as his visitors ignore questions about what he is being accused of. Garranchan’s Khaled hollowly pushes back, invoking his rights, already knowing that these men have no intention of honoring them. By the time Khaled gets angry, it is way too late.

But the play’s success is rooted in the measured performances of Gibbons and Gore as the bureaucratic functionaries who have heard every lie so often, dealt with traitors for so long and who are so convinced of their righteousness that their terrible pursuit is conducted with a surgeon’s dispassion, later revealed to harbor festering rage. These are not slobbering sadistic monsters – which is what makes them all the more frightening.

The taut, stomach-in-knots play is set in the paranoid days following the 9/11 attacks. Arab-American Khaled (Rayner Garranchan) is being casually questioned by two Homeland Security agents in his New York studio apartment.

Over the next 80 minutes with no intermission, the web widens, and the noose tightens. The feds — Bartlett (Jim Gibbons) and Carl (Tim Gore) — keep finding titles on Khaled's bookshelves that raise their doubts from elevated yellow to severe red. Answers to seemingly innocuous questions are turned jujitsu style back on Khaled, who is desperately trapped by insinuation and innuendo.

In flashbacks, we get glimpses of what happened before Khaled answered the door. Carl and Bartlett interview three women, all played by an on-her-game Faiza Cherie, as they home in on ties with known terrorist Asfoor, played by an equally terrific Freddy Valle. There, the script reveals its brilliance: The interrogators are not sadistic madmen. That would be too easy. We are shown how they arrive at such a terrible place.

Visually speaking, "Back of the Throat" works when it really shouldn't. The play isn't so much designed with sets and lights as it is plunked down in the middle of the very intimate Sol Theatre with a few pieces of furniture serving minimal purpose.

And yet, the acting is visceral down to the pores, oozing flop sweat and the smell of fear. Is Khaled the victim of a Salem-like witch hunt (if he floats, kill him. If he sinks, well, that's our bad) or is he a left-wing, militant Maoist who is into bestiality?


The 90-minute, intermission-less play receives its South Florida premiere from Outré Theatre Co., which effectively mines the dark recesses of the Kafkaesque nightmare... the company is at its best with provocative new works like Back of the Throat.

El Guindi and director Skye Whitcomb place the audience squarely inside that apartment with Khaled, asking us to consider how we would cope with such treatment. But no sooner have we begun siding with Khaled that it becomes likely he is not the innocent victim he originally appeared to be.

Rayner G. Garranchan quickly earns our empathy as Khaled... he tries evasive resistance steeped in futile logic, and eventually an indignant rage which make have been the intended goal of the intruders all along. Garranchan maneuvers through these mood shifts with skill, registering his increasing panic every step of the way.

Craggy, soft-spoken Jim Gibbons underplays his hand chillingly as agent Bartlett, injecting a Pinteresque air of menace to the proceedings. Even more enigmatic is Tim Gore as his sidekick Carl, who says little but often seems on the brink of a violent outburst.

Outré Theatre Company presents its production of Back of the Throat at the Sol Theater through November 9, 2014.
Posted by C.L.J.