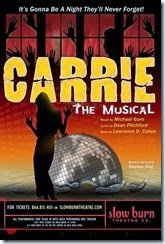 Slow Burn Theater opened its much-anticipated production of Carrie The Musical at the West Boca Performing Arts Theater on October 16, 2014.
Carrie White is a misfit. At school, she’s an outcast who’s bullied by the popular crowd, and virtually invisible to everyone else.

At home, she’s at the mercy of her loving but cruelly over-protective mother. But Carrie’s just discovered she’s got a special power, and if pushed too far, she’s not afraid to use it. Based on Stephen King’s bestselling novel, the musical of  Carrie  hasn’t been seen since its legendary 1988 Broadway production. Set today, in the small town of Chamberlain, Maine,  Carrie  features a book by Lawrence D. Cohen (screenwriter of the classic film), music by Academy Award winner Michael Gore (Fame,  Terms of Endearment), and lyrics by Academy Award winner Dean Pitchford (Fame,  Footloose).

The primary pleasure of Slow Burn Theatre Company’s run at the legendarily miserable (but subsequently overhauled) musical Carrie is enjoying how glowing talent, unbridled earnestness and total commitment provides a worthy reason to watch what remains a flawed piece of raw material.

Despite the unsubtle overheated sturm and drang, this edition renovated for a 2012 New York revival has virtues that Fitzwater has underscored. They start with Gore’s music, and Pitchford’s compassionately exposing motivations for people indulging in despicable behaviors.

…the show is almost worth seeing twice just to savor the performances. The winsome and winning Chamberlain has built an enviable reputation as a solid actress who can issue a gorgeous pure “head voice” or a Broadway belt… Now she has a lead part right in her wheelhouse and she does it justice. Her Carrie starts as a church mouse without succumbing to stereotypes and then – this is the challenge – convincingly grows into someone discovering confidence and self-worth... There’s an especially telling moment when her plaintive little girl voice suddenly gives way to an agonized rock n’ roll wail at the moment she feels betrayed. If this Carrie is not magnetic enough to carry the audience through the first half of the show, that’s how the part is constructed and no fault of the actress.

Keelor, who has been working locally in revues like Waistwatchers and Respect, finally gets to show what she can do both as an actress and a singer. The role of Margaret almost screams to be played as an over-the-top scenery-chewing Gorgon driven to fanatical lengths by her retreat into religion. But Keelor and Fitzwater refuse to succumb. She somehow finds the internally-consistent justifications for what Margaret says and does, even when she’s planning to sacrifice her own child in the heartfelt, heart-breaking tour-de-force “When There’s No One.” She delivers a credible, rather than cartoonish character. She has a fire-and-brimstone vocal quality to invoke the horrors of Hell for her child, but she also has touches the depths of her character’s angst with a voice as capable of a lullaby as a rant.

Olson, who was superb as the wife in Slow Burn’s Parade, lends her liquid voice to the gorgeous duet with Carrie, reminiscing about romance, in “Unsuspecting Hearts.”

Shout-outs also to Sanford who somehow makes Carrie’s friend a believably conflicted teenager and Flores whose despicable wild child Chris is also driven by internal forces. Both have standout voices as well.

Rick Pena’s costumes, as usual, evoke individual character, but special note is due his outfit for Carrie… and Margaret... Credit, too, to whoever came up with the hair styles (probably Fitzwater who is a hair stylist) including Carrie’s long brown hair tightly bound in a single braid over the shoulder and Margaret’s strange coif of long blonde hair.

Fitzwater has said that companies should not limit themselves to “perfect works,” especially when a show has virtues worth exploring. He did it just last season with the musical Chess, which has a flawed book, but he managed to highlight an exciting score with strong singing actors. It is a noble sentiment that should be rewarded. But audiences need to manage their expectations in such cases and cherry-pick the facets of a show that are worth celebrating, as is the case here.

Carrie: The Musical is just as unwieldy, weird and wonderful as you’d imagine a show with such a contradictory title would be.  At least, that’s the way it is as staged by Boca Raton’s Slow Burn Theatre, with direction and choreography by Patrick Fitzwater, who has honed in on the work’s central theme of bullying

…there is salvation to be found in this cast’s singing. You can hear the operatic aspirations lying under this straight musical — there’s no real comedy — adapted from Stephen King’s 1974 novel about a misfit teenager with telekinetic powers that became a hit movie in 1976 (it made Sissy Spacek a star). The vocals from the Slow Burn Theatre company are glorious, supported by a tight, five-piece band under the direction of Caryl Fantel and kinetic lighting by Lance Blank that tip the scales ever so slightly in favor of seeing this production.

A mean-spirited mob — numb and dumb — descends upon Carrie (an explosive Anne Chamberlain), teasing her unmercifully because the awkward teen is woefully unprepared by her mother, Margaret (Shelley Keelor, a combination of steel and nuance) for her first period, which takes place in the gym showers.

Slow Burn's version is fast-paced, engaging, and laden with neat special effects, but the show is still an imperfect hybrid of its current incarnation and its former self -- and of musical-theater jubilance and King's terrifying source material. The lyrics, by Dean Pitchford, contain few surprises, and Lawrence D. Cohen's book contains even fewer scares.

There are no such caveats about director Patrick Fitzwater's cast, his most unimpeachable since January's Parade. As Chris Hargensen, Carrie's chief antagonist, Cristina Flores brings complexity to her contemptuous character, offering just enough insecurity to humanize what could be a one-dimensional villain on the page. As Sue Snell, an initially cruel classmate whose moral awakening triggers most of the action in Carrie, Jessica Brooke Sanford is an effortless picture of guilt, regret, and redemption.

Playing Carrie's oppressively religious mother, Margaret, Shelley Keelor is full of outsized grandiosity, but her scenery-chewing is smartly limited to her introductory scene. The more she's onstage, the more her vulnerability punctures her character's fundamentalist hysteria and she becomes a figure every bit as tragic as her daughter -- misguided, lonely, and desperate.

And as the title character, Anne Chamberlain delivers arguably her best performance yet, one that evolves from shoegazing interiority to emotional and physical transcendence; at times, she almost seems to levitate. It's a triumphant, inspiring performance that digs deep and soars high.

The cast in this production is superb. All of the actors on stage are first class young talents and can sing and dance with the best of them.

Shelly Keelor, in the lead role of Margaret White, mother of title character Carrie White, does well as the religious fanatic mother even if, at times, the music doesn't seem to quite fit well with her voice. She has the characterization down pat, and she certainly has some strength behind her vocal chords.

Anne Chamberlain's Carrie almost at times became 'cute' rather than scary, but her singing voice sold the numbers. As Chris, Carrie's nemesis, Cristina Flores gave a standout performance and, in the role of the regretful Sue Snell, Jessica Brook Sanford gave us some of the best singing of the evening.

One of the real standouts vocally was Ann Marie Olson in the role of the gym teacher, Miss Gardner. Olson has a rich warm voice that was absolutely wonderful to hear.

Slow Burn's cast tries hard and is filled with talented people who are wasted on this material but, in the end, it was a yawn-inducing two and a half hours.

The Palm Beach Post did publish a review, but it’s behind their paywall and frankly the quality of their reviews do not merit the expense.

The Slow Burn Theater production of Carrie The Musical Plays at the West Boca Performing Arts Theater through November 2, 2014.
Posted by C.L.J.