Poll Results: The Most Read Reviewers in SoFla

The dust has settled, and the results are in: 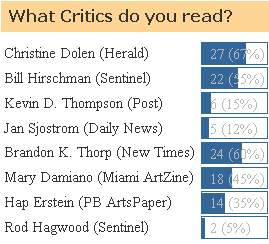 In order of readership:
It was a topsy-turvy week of poll-taking. For most of the week, Christine Dolen dominated, ranging from 100% to 95%. Thursday, Brandon K. Thorp surged ahead, and gained a decisive lead over Dolen for a time. But then another wave of voters shifted the balance once again.

The results look about right, to me.

Christine and Bill have been reviewing for years, and for a time they were the top two. Brandon is the youngest of the reviewers, but writes for two different editions of New Times. It's a weekly, while the other reviewers can get reviews out more often, and frankly, he's a great read.

Mary and Hap both lost their positions in print media, but have moved into Internet-based web magazines. And while their web-based rags are focused on a fraction of the total arts scenes (Miami and Palm Beach) they still review plays over the entire region.

Kevin, Jan, and Rod all write for daily newspapers, but they only cover shows in their 'neighborhoods,' (although Kevin occasionally covers shows at the Broward Center). Kevin and Rod are also the rookies, with less than a year of theatre review under their belts. Jan has been writing for years, but her paper is sharply focused on Palm Beach (much like the town itself). That limits her appeal, but that's true of her paper, too. 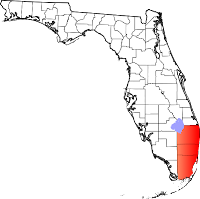 In the final analysis, the writers who review the most shows across the region have the most readers, and that's a fact that certain editors need to embrace. People don't live 'only in Fort Lauderdale' or 'only in West Palm Beach,' or even 'only in Miami.' They sleep in those places. They don't live there.

Email ThisBlogThis!Share to TwitterShare to FacebookShare to Pinterest
Labels: The Poll