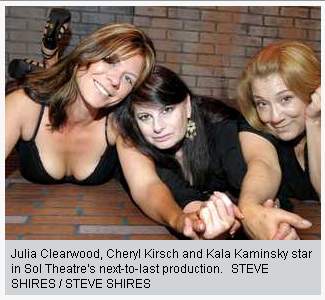 Sol Theatre Project snuck this "limited engagement" into production; at least, it's not listed on SouthFloridaTheatre.com, and no one emailed me about it. But apparently they opened The Vagina Monologues on Saturday, April 11.

...this isn't one of those ''V-Day'' shows featuring performers (or some mix of pros and amateurs) sitting on stools reading from the script.

At Sol, director Robert Hooker and actors Julia Clearwood, Kala Kaminsky and Cheryl Kirsch approach The Vagina Monologues as they would any other play: memorize the lines, stage the thing and bring a variety of characters to life.

Hooker's staging is utterly simple: The women wear black, there's a bench at center stage, a few decorated female torsos surrounding it. The words, not the setting, provide the show's fireworks, though the performers don't make the play sizzle nearly as often as they should.

Sol's Vagina Monologues is an almost-swan song for the company, which will present Angel Perez in Men on the Verge of a Hispanic Breakdown before Hooker closes up shop sometime this summer. Clearwood, Kaminsky and Kirsch have performed in numerous Sol productions throughout the company's history, so to have them back for its next-to-last show seems right. And to have them performing a piece that has meant so much to women worldwide is a good thing.

Brandon K. Thorp reviewed for the Broward/Palm Beach New Times, and he's way off in the rough again, but that's why we love him:

Listen: It's going to be extremely hard for me, as a happy gay man, to sensibly assess Sol Theatre's production of The Vagina Monologues. I'm aware that gay men become gay for different reasons — hormones in the womb, an exposure to community theater, or brie at some critical developmental stage — but me, I became gay at least in part due to a wild-eyed fear of vaginas.
...

...I disavowed the vagina, the coochie snorcher, the pussy, the twat, the cunt, and the pussycat. I mention all of these names for that holiest of holies because the The Vagina Monologues do as well. Over and over again. And if reading them makes you uncomfortable, at The Vagina Monologues you will positively writhe. I writhed.

And I suspect The Vagina Monologues makes director Robert Hooker writhe a bit also, which is too bad, since this is Sol's second-to-last show, performed prop-less on the same sad, bare-bones set on which Sol produced Sex, Drugs, and Rock'n'Roll two months ago, and it could have used Hooker's guidance. For once, his work seems either under- or mis-directed, and his three actresses are obviously unsure of themselves.

Julia Clearwood, usually one of South Florida's brightest actresses, delivers her monologues in a series of over-affected character voices and never quite knows what to do with her hands. (The notable exception comes in the final VM, when she ably demonstrates the great variety of orgasmic moans ululated by different kinds of women.) The two other actresses — Solsters from way back, who are reappearing on stage after a two-year sabbatical — don't do much better.

Yet I suspect the uninitiated should see this show anyway — except for gay males, who may take a well-earned exemption. Straight men should definitely see it. Because it will make them question everything they thought they knew about coochie snorchers.

This is just a bare sample of Brandon's ravings. You should absolutely click through to read this review - and don't drink and read, or you'll spit-take on your keyboard.

This limited engagement of The Vagina Monologues runs at Sol Theatre Project through April 26th.