You may remember that Promethean Theatre Company was going to do David Mamet's Speed the Plow earlier this year, and that they lost the rights to another theater. They eventually replaced it with a very well-recieved production of The Dumb Show.

Well, the Drama Queen reports that GableStage just replaced its upcoming August opening of Michael McKeever's Lewd and Lacivious; with Speed The Plow. Yes, for everyone who was speculating, it was none other than Joe Adler who pulled the rights out from under Promethean Theatre, just as he did to Actors' Playhouse with Mindgame a few years back. OK, that's unfair: he didn't pull them out from under Dave Arisco so much as browbeat him into surrending them. Joe's a great director, and he's really a generous guy, but this filching of plays has really got to stop.

An anonymous tipster maintains that Gablestage had the right to Speed the Plow before Promethean Theatre did. A few phone calls reveals this to be the case: it turns out that this is actually a direct repeat of the Mindgame case: both theatres had the rights, and no one 'pulled' them.

As it turns out, rights to a show are only geographically restricted for LORT contract theatres: neither GableStage or Promethean - or Actors' Playhouse - are members of LORT. That means , usually, as far as the licensing agents are concerned, all three of them can do the same play at the same time.

With Mindgames, the Playhouse secured the rights first, and GableStage later. But GableStage scheduled it sooner. David Arisco could have kept it on his schedule, but who was going to see his production 2 months after Joe Adler did it?

With Speed the Plow, GableStage secured the rights first, but Promethean scheduled it sooner. Unlike Arisco, Joe Adler called Samuel French and asked to have Promethean's rights to do the show pulled. Because of Gablestage's (And Joe Adler's) history and reputation, the agency agreed to pull the rights.

So Joe technically didn't filch anything, but he did pull the rug out from under Promethean a week before they were scheduled to hold auditions. Fortunately, they managed to find a replacement in time to cast it and take it to full production, and if we hadn't known the story in advance, we would never have guessed that it was a the third choice for that slot. 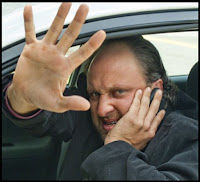 Joe's been working fast, as he's already lined up Paul Tei and Greg Weiner for the show. He has not, apparently, cast the role originated by Madonna. It's going to be quite a task to find someone as strong as Tei and Weiner. Christine Dolen is right: this is definitely going to be a show to catch.
In a slighly ironic twist, one of the pictures used in Christine's article is Weiner's promo shot for Promethean's The Dumb Show.
Speed the Plow opens at GableStage on August 15, 2009.
Posted by C.L.J.