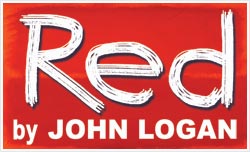 GableStage opened its production of John Logan's RED on November 5, 2011


It is 1958 and abstract expressionist painter Mark Rothko has just landed the biggest commission in the history of modern art; a series of murals for New York's famed Four Seasons Restaurant. Raw and provocative, this 2010 Tony Award-winning play is a searing portrait of the ambition, vulnerability and agony inherent in the art of making art.


Weiner's Rothko simmers with contempt for mediocrity and complacency, nearly unaware of Ken. At times Weiner even manages to convey that part of Rothko that is possessed of a certain degree of self-loathing. There is no tender-hearted man beneath the gruff exterior, only more layers of gristle. Weiner does a fine job giving us just that without the character seeming two dimensional. In all fairness, however, Weiner does not seem comfortable with the language... The words don't seem to come naturally to him when Rothko is speaking intellectually and passionately about art. They are well rehearsed, but do not feel organic, particularly in the first scene.

We believe Didato, as Ken, as he aches to be accepted, mentored and affirmed... Near the end of the play when Ken finally vents his feelings to Rothko we see Didato emerge as an actor—convincingly at risk and in the moment. He successfully holds back until that moment arrives, making it more meaningful.

GableStage does a wonderful job with the canvases and use of light. One is struck by how well they reflect Rothko's opinion about controlled lighting to protect the look of his work in a scene where a painting done in reds is transformed by just changing the lights. Directing by Joseph Adler is thoughtful, and the pacing of the show is strong, for this extraordinarily well written play by John Logan.


“Everything here is about me,” bellows Gregg Weiner at Ryan Didato in Red at GableStage.  And he's right on two counts; it's all about Weiner as abstract (no, I'm not) painter Mark Rothko, and it's all about Weiner as the actor.  In one of his best creations to date, and Weiner has many, he is barely recognizable.   Not because of the partly shaven head, glasses and costuming.  It's as if he's changed the muscles and planes in his face.  Weiner has disappeared and become this arrogant, bullying, opinionated and fascinating Mark Rothko.

Ryan Didato, as the young assistant, (wash the brushes, stretch the canvas, make the coffee, sweep the floor) travels effortlessly from over-eagerly fawning at the foot of the master to forcing his employer to accept who and what he really is.

In John Logan's dense yet eminently listenable ninety-minute one act, Weiner and Didato... take what seems at first an art lesson... and turn it into engrossing drama.   It's in Logan's script, of course, and the taut direction of Joseph Adler, but ultimately it's the two performers who deliver the evening.


...while the evening at Coral Gable’s GableStage has minimal action, this journey into Rothko’s mind and soul never feels static, thanks to a verbally nimble, volcanic performance by Gregg Weiner and skillfully modulated, yet invisible direction by Joseph Adler.

Logan is to be commended for not choosing to write a traditional biographical play, let alone a one-man show. Instead, he offers a snapshot in time, focusing on Rothko’s artistic philosophy rather than his life’s milestones. And the introduction of Ken, the empty vessel artist wannabe, motivates Rothko to verbalize his paranoid, judgmental and occasionally insightful views on his torturous profession.

Red is that rare play that takes theatergoers inside the artist’s mind. It has been justifiably acclaimed and will be much produced this season in regional theaters across the country (including the Maltz Jupiter in February). It is compelling theater for visual art mavens and novices alike, and this GableStage production delivers its power, down to the last brawny brushstroke.


Playwright John Logan uses his own medium, words, to paint a telling portrait of the multifaceted Rothko in Red, the Olivier- and Tony Award-winning play now getting just its third American regional theater production at GableStage.

The play provides multiple opportunities for dramatic fireworks, and director Joseph Adler is adept at setting them off, though he’s equally artful in navigating the subtle tensions of the script’s more “relaxed” moments.

Adler certainly has those two fascinating actors in Carbonell Award winner Gregg Weiner, whose Rothko seems always to be thinking (a key part of the painter’s artistic process), and Ryan Didato, whose eloquent, reactive silences telegraph the turmoil within a young man itching to leave his own mark on the art world. Weiner actually plays Rothko with some restraint, which makes the cool intellectual’s explosions all the more startling. Ken is a breakout role for Didato, a New World School of the Arts grad who turns the composite character into a compelling human being who clearly evolves over time.

Bringing Red to life has also inspired artistry from GableStage’s always-impressive design team. Lyle Baskin has created his version of Rothko’s Bowery studio, an expansive space in an old gymnasium. Light is a key point in the dialogue (as well as a Rothko obsession), and Jeff Quinn perfectly illustrates its transformative powers on the play’s faux Rothkos. Ellis Tillman provides era-reflective costumes, right down to Ken’s increasingly paint-splattered shoes. And Matt Corey gets the work-fueling music just right, from classical for Rothko to rebellious jazz for Ken.


In GableStage’s fine edition, Rothko struts and strides across his studio giving his assistant and the audience what is essentially an 80-minute master class in an artist’s responsibility....

...Weiner and Didato caught the fever under Adler’s deft, invisible direction, and the audience strapped in for the whitewater rafting ride of ideas delivered by two skilled actors.

Weiner continues his string of accomplished portraits here with this mercurial creature far different from the cheating husband in last season’s Fifty Words on the same stage... he skillfully makes Logan’s dense concepts instantly comprehensible to the audience.

Didato... is  convincing as the awed acolyte who finds the backbone to point out the master’s hypocrisies and shortcomings. Didato shines in the scenes in which Ken challenges the Rothko’s pronouncements (such as dismissing the young upstarts Warhol, Rauschenberg and Stella) or the possibility that the Seagrams commission is a sellout. Didato invests these with a primal passion missing from much of the rest of the play.

...the GableStage production underscores its worth as a journey into the very marrow of creation as Mankind’s attempt to produce something infinite and eternal.


Carried by Weiner's grounded yet forceful performance, this play is pretty damn good. It's a tightly acted and reflective drama that paints a dense and compelling portrait of a complex, flawed, and opinionated man.

Through Weiner's performance, we clearly see Rothko as a man deeply influenced by Nietzscheism. Weiner, a five-time Carbonell winner who was last seen at GableStage in 2010 as Adam in 50 Words, fits the role of Rothko just right with his baritone inflection, nuanced emotional outbursts, and uncanny ability to cut Ken down to size with merely a look.

Held together by an absorbing classical soundtrack, set designer Lyle Baskin's stripped-down lighting, and the talent of the two actors who adeptly deliver Logan's prose, the play is solidly directed by the always-awesome Joseph Adler.

GableStage's take is a fantastic one, thanks mainly to Weiner's performance, in which he reveals a narcissistic, fading giant in a postmodern world. "The actor in me wishes there was audio or film on the man," Weiner says. "But the benefit is there is nothing to imitate or act off of other than his writings, which helped me a lot."

And then, in true Rothko-like fashion, the amiable Weiner says, "It's a work in progress."

RED plays at GableStage at the Biltmore Hotel through December 4, 2011.
Posted by C.L.J.