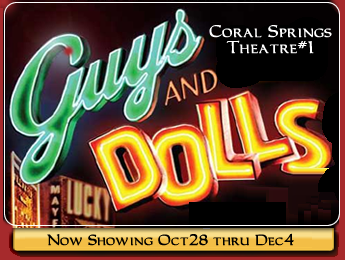 The Stage Door Theatre opened its production of Guys and Dolls and October 28, 2011.


Nathan Detroit, the organizer of the oldest permanent floating crap game, bets Sky Masterson that he can't make the next girl he sees fall in love with him. Featuring “Guys and Dolls”, “Luck Be a Lady Tonight”, and “Sit Down, You’re Rocking the Boat”, this beloved musical is also a great American classic and multiple Tony-Award Winner!


Unfortunately, with a couple of exceptions, this cast just can't handle Runyon.  Guys and Dolls is based on the writings of Damon Runyon, chronicler of 1930s and 40s Broadway and its cast of gangsters, hustlers, gamblers and their molls.   His characters spoke in a language of their own, a mix of the slang and the formal, with never a contraction to be heard.   This dialogue is the heart of Guys and Dolls and if it's not delivered convincingly the show becomes a concert.  In this case the concert is not particularly well performed.

Jill Taylor Anthony as Miss Adelaide and Adam Bashian as Sky Masterson stand out from a so so crowd on the stage.


Among the inexplicable mysteries of life are how does a hummingbird fly, how can the Kardashians have a television show, and how can Broward Stage Door keep producing engaging shows like The Drowsy Chaperone and The Light in the Piazza and then revert to such misfires as Mame and, now, Guys and Dolls.

The most glaring problem is that only one performer – Jill Taylor Anthony as the eternally left-at-the-altar Adelaide – has even a clue to classic comic timing, despite being presented with some of funniest lines ever written for the stage. Joke after joke, gag after gag fall flatter than the ratings for the new Charlie’s Angels TV reboot.

Several actors including Bashian and Amaya have solid voices, but only Anthony as the nightclub headliner who sounds like an unmuted trumpet is acting convincingly while she sings.

And yet, the base material is so strong that even this crew occasionally reaches the actual level of adequate entertainment. The roof-raising numbers Sit Down You’re Rockin’ the Boat, the title number and the finale had all the qualities the rest of the show lacked.


With matinee-idol good looks and a silky baritone voice, Adam Bashian is a real star in his role as Sky Masterson. He is backed up by strong performances by Phil Gosselin and Justin Lore as wily gamblers Nicely-Nicely Johnson and Nathan Detroit, and Kevin Reilly as tireless copper Lt. Brannigan, decked out in a Dick Tracy-yellow overcoat. Jill Taylor Anthony nails Detroit’s girlfriend, naïve nightclub singer Miss Adelaide. Colleen Amaya, as a Sarah, delivers beautiful, crystal clear vocals throughout the show, but there just isn’t much romantic chemistry with Bashian’s Sky.

Set designer Sean McClelland contributes a flexible set design... Despite the clever use of the turntable, the set... has an amateurish, two-dimensional look that just doesn’t stand up to the vibrant Technicolor costumes from Costume World. And, as often happens at Stage Door, the cast finds itself awkwardly maneuvering in very tight quarters thanks to the expansive set. Chrissi Ardito’s daring choreography notably suffers as a result.

When Broward Stage Door takes a risk and rolls the dice—as it has done in the past with A Little Night Music, The Light in the Piazza and to a lesser degree with The Drowsy Chaperone and Mack and Mabel—the result is a big, big winner.  Guys and Dolls was a safer bet, but the company still beats the odds with an entertaining show that will continue to pack the house.


The cast are all in top-notch voice, singing out with the beepy pulse of a telegraph machine and even managing to find some swing in Frank Loesser's score, here performed over recorded music. And the brassy costumes and technicolor sets are all wiseguy-whimsical and period-perfect.

And yet, even having acknowledged that, this version of the 1950s Broadway hit is heavy on the visual, but light on the charm... And some of the show's snap is smothered by a few flat stretches in the middle and clunky choreography, notably the "Havana" number in the first act.

...it's not edginess or even revelation we're expecting. But if you're going to go to Runyanland, you somehow want the trip to be more fun than we're having here.

Guys and Dolls plays at the Stage Door Theatre through December 4, 2011.
Posted by C.L.J.