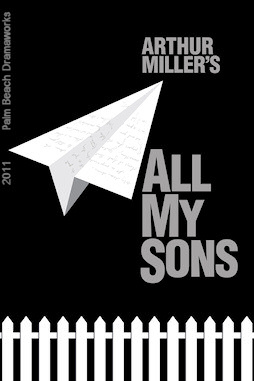 Palm Beach DramaWorks opened its production of Arthur Miller's All My Sons on November 11, 2012, kicking off a new era of live theatre in its newly renovated home, the former Florida Theater on Clematis Street.


This morality play about the cost of lying and the price of truth-telling examines a troubled family and a father who placed duty to his family above the lives of others, and now must face the consequences.


Long on the West Palm Beach company’s to-do list, it deferred producing All My Sons until moving into its new home, the far roomier, yet still intimate performance space created from the former Cuillo Centre for the Arts. There it benefits from a stunning two-story set by resident designer Michael Amico, a richly detailed, lived-in Ohio home, porch and backyard of the Keller family.

The set is a marvel, but with the cast that director J. Barry Lewis has assembled and guided through Miller’s many figurative land mines, this All My Sons would be a shattering dramatic experience if it were played on a bare stage.

...the play’s flaws do not prevent the diminutive Tigar from giving a towering performance that demands to be seen.

Genial and folksy with his neighbors early on, Tigar becomes gradually hemmed in by Joe’s past, and he lashes out with the bellowing bluster of a broken man. He is the reason this All My Sons is a must-see experience, but the entire ensemble as Dramaworks contributes to the forceful production.

Jim Ballard... impresses as Joe’s surviving son Chris, who has invited home his brother’s former girl friend, Ann (Kersti Bryan), intending to propose to her... For as long as possible, Chris tries to keep his marriage plans from his mother, Kate (alternately sweet and steely Elizabeth Dimon)...

The points Miller loses for neatness, he more than makes up in dramatic ferocity. In this, he has a skillful accomplice in director Lewis, who understands the value of the initial languid pace and when to open up the throttle for maximum impact...  Without negating any of its worthy past work, this feels like a brawny new company, flexing its muscles, inviting the community into its new playhouse for many new dramatic adventures to come.


Palm Beach Dramaworks’ production of Arthur Miller’s All My Sons continues its track record of powerful productions of under-performed plays from the American theater canon.

Jim Ballard as Chris, the reluctant heir to his father’s business and a disillusioned war vet, grows in power and conviction to a father-son confrontation that’s as explosive a moment as any seen on the Dramaworks stage.

The remainder of the 10-member cast turn in convincing performances under the guidance of resident director J. Barry Lewis.


Should you doubt the enduring power of the play, do make it a point to see Palm Beach Dramaworks’ superb new production of All My Sons. No matter where you live in South Florida, this one is so worth the drive.

While retaining intimacy and expanding its seating capacity, Dramaworks has gained the ability to do more with design — and what the team pulls off for All My Sons is stunning.

Under J. Barry Lewis’ astute, graceful direction, the cast (which also includes Kenneth Kay and Nanique Gheridian as the Kellers’ neighbors on one side, Dave Hyland and Margery Lowe as the neighbors on the other, plus Kaden Cohen and Leandre Thivierge alternating in the tiny role of a neighborhood kid) crafts a collection of stirring, deep performances. Tigar roars as Joe, a little man with a big secret. Dimon’s breakdown when she learns the truth about her beloved lost son is monumentally moving. Ballard and Bryan are beguiling as a couple trying to love in a world that would deny them. Burgess rides a roller coaster of emotions, from fury to nostalgic relief.


...even though the number of seats has nearly tripled, and the size of the stage has increased significantly, the company has managed to retain the intimacy of the Banyan Street space.

All My Sons is a play that would have been impossible to produce in the old Palm Beach Dramaworks space. Not only is the cast of ten and the set requirements more that the old space could handle, the story, emotions and impact of the play are too big for the company’s former tiny venue.  Here in the new Don & Ann Brown Theatre, All My Sons has room to breathe, yet the emotional impact resonates even when watching the drama unfold from the last row.

The entire cast is marvelous, and without a single misstep. There’s an abundance in All My Sons that was characteristic in the heyday of theatre but is rarely seen today.  Several of the characters in All My Sons are minor and exist to create a sense of the community in which the Kellers exist, and to add one piece of vital information. These days, playwrights wouldn’t even think to write so many characters, and if they dared, the costs of producing such a play would limit its life.

Tigar, a veteran TV and movie actor, delivers an astounding performance as Joe Keller, the flawed patriarch who refuses to take responsibility for his actions... Tigar performs this devolution masterfully with an emotional and physical transformation he creates through his body language, posture and his expression.

Tigar is well-paired with Elizabeth Dimon... Dimon portrays Kate with resolute decisiveness... But Dimon also finds the heartbreak in the character, as a mother both mourning the loss of her son while believing he’s still alive. It’s a beautiful, nuanced performance.

Ballard plays Chris Keller as a man on the brink of life, torn between staying with what he knows and his desire to start fresh. His scenes with Tigar, when the son confronts his father with the older man’s failures, will push the audience to the edge of their seats.

Bryan... mines the poignancy and complexity in Ann’s situation, and gives a beautifully crafted performance.

Amico was a master at creating awe-inducing sets in the old space, and he has outdone himself... his design — a two story house with a back porch, garage, and backyard — is breathtaking. The set is enhanced by John D. Hall’s evocative lighting design... The sound, by Rich Szczublewski, is clear and rich, and sounds natural, not overly amplified.

...judging by this production of All My Sons, the new space has allowed Palm Beach Dramaworks to amp up the quality work they’ve always done, resulting in a production that should keep the house full every performance, and still leave some theatergoers wishing they had bought tickets earlier.

All My Sons plays at Palm Beach DramaWorks through December 11, 2011.
Posted by C.L.J.