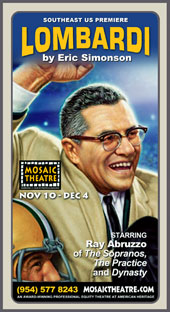 Mosaic Theatre opened its production of Lombardi on November 10, 2011.


Don't miss this story of legendary Green Bay Packers coach Vince Lombardi and his wife Marie. The play takes place mostly in November of1965, when a young journalist from New York City, Michael McCormick,comes to live with the Lombardi family in order to write a story.


Richard Jay Simon directs the material efficiently on a gridiron stage flanked by two revolving stages, designed by technical director Douglas Grinn to become such locales as the Packers’ locker room, the Lombardis’ living room and a Green Bay pool hall/pub. And Simon has imported The Sopranos’ Ray Abruzzo to play Coach Lombardi with a persuasive, albeit two-note -- seething and volcanic -- performance.

...Lombardi is entertaining, but you had better be interested in football, because the play is unable to make the leap to metaphor, to find a larger message in the man’s accomplishments. Simonson knows how to craft a good one-liner, with most of the best handled with assurance by highball-toting Turnbull, but after a while you will probably crave something more profound.

Rod Stafford Hagwood was sent by The Sun-Sentinel:


Lombardi doesn't really delve any deeper into the life of the legendary Green Bay Packers coach than, say, one of those glossy NFL documentaries.   But the production at the Mosaic Theatre in Plantation is sturdily staged and intensely acted with Ray Abruzzo in the title role...

...we get a few half-hearted insights, but nothing that really sticks in Eric Simonson's fresh-from-Broadway play. Instead of lingering on the demons that must have swirled in Lombardi's head, the action whips into flashbacks showing relationships with star players...

Our view is focused by Michael McCormick... Played by Antonio Amadeo, the character serves as a narrator and a patient ear for Lombardi's long-suffering, gimlet-eyed wife, Marie (Laura Turnbull)... Both actors have formidable gifts: Turnbull can pitch her voice just right to cut through all the testosterone, and Amadeo has perfected that ol' reporter trick of looking his subject directly in the eye with no judgment.

But Abruzzo... does give you flashes here and there. It's not in the bombast and bluster, but rather in the moments with no dialogue – just a look.


Abruzzo has a firm grasp on the drive and tunnel-vision determination that were part of the nature of Lombardi. He blusters and bellows mightily. He is so focused on the blustering that he actually trips over a few of his lines. Lombardi's fumbled attempt at retelling a joke actually makes him more likeable.

As Marie, Laura Turnbull is nicely turned out in the fashions of the period, usually sporting a highball as her favorite accessory... Turnbull lets just enough of the love shine through that has surely held them together. She is not truly put upon, but rather is an emotional touch stone to a man driven to obsession by his passion for football.

Antonio Amadeo has a likable charm and youthful energy as Michael... Skye Whitcomb turns in a commanding performance as Jim Taylor. His anger, accent work and physicality make him completely believable. His argument scene with Lombardi late in the show is one of the strongest moments in the show.

...set design by Douglas Grinn maximizes Mosaic's black-box space creatively for this production. One does not have to be a football aficionado to enjoy this look at the private life of famed coach Vince Lombardi, though it may help.


Vince Lombardi:  the name is synonymous with football.  But you don’t have to know anything about the gridiron or touchdowns to enjoy Lombardi, making its southeastern premiere at Mosaic Theatre in Plantation.

Abruzzo’s Lombardi is a compact ball of energy, a pitbull with a heart of gold.  Abruzzo is marvelous, deftly navigating the extremes of Lombardi’s personality, barking orders at his players or his wife one minute, then looking like a contrite child the next when he realizes he’s crossed a line.

Turnbull expertly conveys the world-weariness within Marie, a woman who realized too late that when she married Lombardi, she also married football.

It is in their scenes together that Abruzzo makes Lombardi less an icon and more of a complex man whose pride and desire to be the best drive him to be a part of what he calls a winning tradition. It’s a fascinating portrait of a marriage acted by two consummate pros.

Director Richard Jay Simon keeps the pace brisk and builds suspense throughout, even though the play is more of a character portrait than a plot driven narrative.


Though its subject is an undeniably great football coach, Eric Simonson’s Lombardi isn’t exactly a great play. But even so, you have to admire the commitment and care Mosaic Theatre artistic director Richard Jay Simon has lavished on his newest production.

Abruzzo, who played Little Carmine Lupertazzi on The Sopranos, channels Lombardi’s intensity, his short fuse and his New Jersey accent.

Turnbull is intriguingly crisp and reflective as Marie, a woman who will listen to her sputtering husband for just so long...

Amadeo radiates warmth as a young writer on the cusp of an important career decision. Wilson, Fitzgerald and Whitcomb suggest their characters’ humor, drive and personality quirks but don’t seem credible physically as football pros.

Lombardi is never going to give other, better plays a run for their money. But during this football-intensive time of year, it might be just the thing to get a guy away from the TV and into the theater.

Director Richard Simon has made the most of everything his actors and designers have given him.   You don't have to have watched much of America's second favorite spectator sport to instantly identify with Abruzzo's Lombardi; the face, the stature, the clothing, thank you, K. Blair Brown.

...Laura Turnbull quietly aces the role of Marie, Lombardi's wife, as she pours down the booze and pours out the problems of living with a man whose priorities peak on Sunday afternoons.

It's a fast, engrossing 90-minutes...  But still there's a feeling that all is not right with Eric Simonson's Lombardi.  There's a thinness to the story, no surprises, a life led and then it's over.   Perhaps we all know too much about the legendary Vince Lombardi.  And all the high production values, good acting and direction can't quite suspend reality.


...attention to minutia defines Mosaic's visual approach for Lombardi, Eric Simonson's fresh-off-Broadway drama about a week in the life of legendary Packers Coach Vince Lombardi. The sets at Mosaic are usually ravishing, but this time, designer Douglas Grinn has outdone himself, transforming the smallish space in the American Heritage Center for the Arts into the aforementioned locker room, an office, two semicircles of domesticity, a pub, and, centrally, a gridiron battleground illuminated by stadium floodlights. There's even a JumboTron hanging from the ceiling...

...the result has been counter-intuitive; what at first seemed like the riskiest venture of Mosaic's current season began selling out before the first performance. It certainly helped that Artistic Director Richard Jay Simon snared Ray Abruzzo as the legendary coach...

As Green Bay players Jim Taylor, Paul Hornung, and Dave Robinson, the supporting cast of Skye Whitcomb, Scott Douglas Wilson, and Donte Fitzgerald are fine, and Turnbull is a consummate actor incapable of even a mediocre performance. But as the title suggests, this is Abruzzo's show all the way, and the play can't help but sag a little when Lombardi is offstage.

...Abruzzo acts possessed by the very spirit of Lombardi himself, his blood streaming green and yellow...  To watch Abruzzo navigate through this volcano of a man is to look beyond football; we could just as easily be absorbing the mindset of a maniacal general, a paranoid politician, or a tyrannical film director. In both its casting and staging — Lombardi is often positioned on elevated platforms, to give the diminutive coach authority over his tall players — the show communicates the intimidating reality of living under a dictator.

Lombardi plays at Mosaic Theatre through December 4, 2011.
Posted by C.L.J.