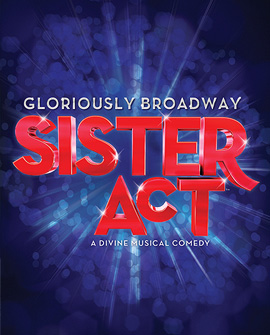 The national tour of Sister Act opened at the Broward Center for the Performing Arts on December 18, 2012.

Sister Act is Broadway's feel-amazing musical comedy smash!  Featuring original music by 8-time Oscar winner Alan Menken (Beauty and the Beast, The Little Mermaid, Little Shop of Horrors), Sister Act tells the story of Deloris Van Cartier, a wannabe diva whose life takes a surprising turn when she witnesses a crime and the cops hide her in the last place anyone would think to look - a convent! Under the suspicious watch of Mother Superior, Deloris helps her fellow sisters find their voices as she unexpectedly rediscovers her own. A sparkling tribute to the universal power of friendship, Sister Act is reason to rejoice!

There is something about nuns singing and dancing in a very un-nun-like way that never gets old.  Just look at Sister Act, part of the recent rash of screen to stage adaptations. Sister Act stays true to its cinematic roots while enhancing the story with a soulful, jubilant score and fun lyrics.

Campbell plays Deloris with panache, peppering her character with sass and vulnerability. She is a powerful yet approachable performer...  Resnick gets many of the best lines as the strict, clever Mother Superior, and her solo, “Haven’t Got a Prayer”, is a highlight of the show. Lael Van Keuren is terrific as the meek postulate Mary Robert, and her voice rattles the rafters in her show-stopping solo “The Life I Never Led”.

Kingsley Leggs is the perfect 1970s blaxploition bad guy as Curtis, Deloris’s boyfriend, and he gets perhaps the funniest song in the show, the smooth anti-love song, “When I Find My Baby.” E. Clayton Cornelious, as Eddie, the cop who’s sweet on Deloris, brings the soul in his solo “I Could Be That Guy,” which feels like an outtake from “Soul Train.”  “The Lady in the Long Black Dress” is an homage to the 1977 song “Float On” by The Floaters, and is comically performed by Curtis’s henchmen. All of these guys would make Don Cornelius proud.

As a pre-sold title because of the movie and with a 14-month run on Broadway, Sister Act has hit the road and from the reaction to Tuesday evening’s opening performance, it is satisfying audiences out for feather-light entertainment. The music is peppy, the cast has talent to spare and no one was expecting another Sound of Music, were they?

Ta’Rea Campbell ably carries the show as Deloris, with a killer punch line delivery and the vocal cords to grab and keep our attention. She plays well off of Hollis Resnik as the put-upon Mother Superior who is plunged into a crisis of faith by Deloris’s arrival. Resnik gets the most conventional show tunes (Here Within These Walls, Haven’t Got a Prayer), and climbs every mountain with them. Other standouts in support are E. Clayton Cornelious as a nervous cop with a crush on Deloris and Lael van Keuren as the requisite young postulant who learns to stand up for herself.

Jerry Zaks took over the direction of Sister Act as it lurched towards Broadway, giving the show his signature speed. This is not a show that will have a long shelf life, but if the family is looking for something to see this holiday season, Sister Act should suffice.

Sister Act s plot adapts Joseph Howard s 1992 screenplay but Cheri and Bill Steinkellner s book, with a savvy overhaul by Douglas Carter Beane, streamlines it for the stage and Jerry Zaks exuberant direction propels the story forward. After she sees married lover Curtis whack one of his goons, Deloris seeks protection from Eddie, a sweet cop who has had designs on the diva since high school. Eddie stashes Deloris at the Queen of Angels convent, against the objections of the no-nonsense Mother Superior (Hollis Resnik, who has superior comic timing.)

...costume designer Lez Brotherston and set designer Klara Zieglerova have the cast, who all have terrific voices, shaking their groove things before a giant, dazzling statue of the Virgin Mary. They must have spent a fortune on this production.

And that's all we get; one performer has "superior comic timing," and everyone has "terrific voices" under the director's "exuberant direction."

This is one of the most worthless reviews we've read in awhile; we understand that Christine Dolen deserves the occasional vacation, but why do we have to suffer such terrible writing in her absence?  The Herald should be ashamed of itself for publishing such a shoddy excuse of a review, considering they now expect us to pay for their online content.

Sister Act plays at the Broward Center through December 30, 2012.
Posted by C.L.J.