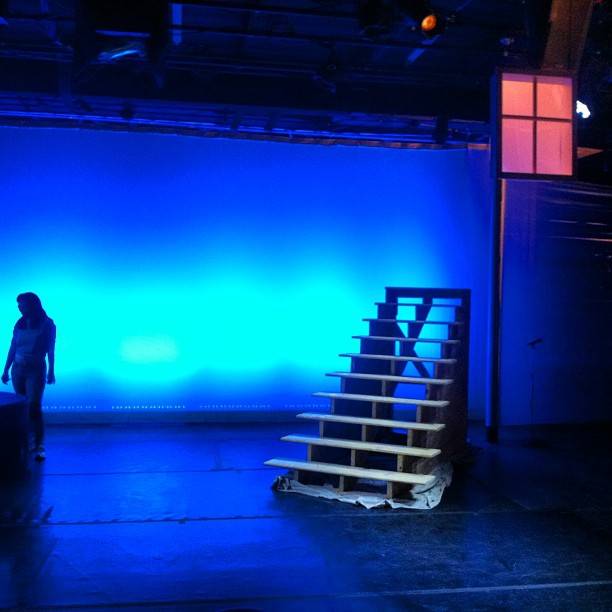 It's the last Monday of 2012, and of course, there are lots of stories looking back at the past year.  And what a year it's been, with well-loved companies unexpectedly closing their doors, and a few new companies popping up.  The Scene continues, even if the players change.

Speaking of changing, we're still looking for photos of empty theaters to include at the top of this column every week.  YOUR theater. Yes, you!  Get a camera, and snap a photo, and send it in; heck, post it to our page in Facebook.  Or let us know where to look.

Today's "dark" theater is a shot of the set being put together for Mad Cat Theatre's production of Christina Wong's Cat Lady, opening this week at the Light Box at Goldman Warehouse.

BWW's Year in Review
Broadway World tends to treat Florida as one giant neighborhood (when it isn't treating Fort Lauderdale and Miami as two different theater worlds), but their recap includes a lot of South Florida stories.

The View From Palm Beach
Palm Beach ArtsPaper managed to get as far south as Coral Gables for its year-end story, and points out there were gains as well as losses.


Institutionally speaking, we lost the Caldwell Theatre, as well as Promethean and the Mosaic, but there were also gains, like Parade Productions, the Plaza Theatre, Outré Theatre Co. and The Theatre at Arts Garage.

But mostly it was "a year of standout musicals and Pulitzer prize winners."

The View from Wall Street
Once again, Terry Teachout, an honest-to-god Broadway theatre critic, managed to make time check out the South Florida theatre scene, and finds it noteworthy enough to mention in his yearly wrap-up for The Wall Street Journal:


Elsewhere in America, Chicago's Goodman Theatre outdid itself with Eugene O'Neill's The Iceman Cometh, starring Nathan Lane and Brian Dennehy and directed by Robert Falls. No less memorable, though, were Paul Zindel's rarely seen The Effects of Gamma Rays on Man-in-the-Moon Marigolds, poignantly produced by Palm Beach Dramaworks, and an equally rare and satisfying revival of Warren Leight's Side Man by 1st Stage of Tyson's Corners, Va., which operates out of a strip mall.

Just In Case and Keeping It Together
Although we've included these links before, it just seems right that we should include the wrap-ups from Florida Theater On Stage and, of course, The Miami Herald, the only regional daily still covering the arts and thus the only major daily worth reading.

On Opening Nights
Critics tend to see opening night performances so they can get the word out early.  But while it may be a necessary thing, it's not necessarily the best night to see a play, as Florida  Theater On Stage explains.


Often shows improve markedly after opening because casts and crews have such a short period to ramp up a production in South Florida regional theaters. It’s usually about two and half weeks of rehearsals, three weeks if they’re lucky.

Of  course, those of us who have worked inside the industry know this.  One reason that The Scene doesn't do reviews is that a certain site administrator prefers to see the shows later in the run, when they've had to time to finish cooking; that's too late to benefit the production with a review.  That, and our tendency to compartmentalize.


"It is my story as much as it is given to the other people in the show and to the audience throughout the course of the performance," says Wong, who stars in Cat Lady. "It's a story about finding a genuine connection in a world of artifice. Where does human connection exist? And how much of our interactions with people are scripted performance?"

And guess who got cast?


Veteran actor Ken Clement plays Oliver, the Cat. When he was offered the role by the show's director, Paul Tei, who is also the founder and artistic director of Mad Cat Theatre Company, Clement recalls their conversation. " ' Let's take a risk, what do you say?' " He continues: "The great thing about Mad Cat is that the company never does the same thing and we never play it safe..."


What show do you wish somebody down here would produce?
Oh, there are so many….The Cherry Orchard, Picnic, The Royal Family, Harvey, Mother Courage, Lion In Winter, Ghosts, Death Of A Salesman, anything by Williams. I’m hooked on those classics, but I know that cast size makes many of them impossible to produce.

We've actually seen some of those shows on South Florida stages, but not recently; Caldwell's The Cherry Orchard was incredibly fresh, and The Lion In Winter played at the long-defunct Stage.  It's time to bring them back, so that a new generation can see what all the fuss was about.

A New Kind of Seat
Minnesota Public Radio reports that The Guthrie Theater is jumping on the all-internet-all-the-time bandwagon.


Today the Guthrie announced that a dedicated section of the audience will actually be encouraged to 'tweet' during performances of the Italian comedy The Servant of Two Masters.

These "tweet seats" as they're called, will be available for four consecutive Thursday evening performances, beginning December 27. They're located on the balcony level of the McGuire proscenium stage, so as not to be disruptive to other theater-goers.

The Gauntlet is Thrown
Parabasis weighs in on this new phenomenon in a post entitled Attention Must Be Paid.  Can you guess where he's going with this?

So I have a counter proposal for theaters trying out tweet seats: Why don't you  try to do a show where both the play and the production are of such quality that someone who is tempted by their phone will want to watch from start to finish without jumping on the internet? And then, rather than sabotage it in the hopes that you can turn your audience into unpaid marketing labor for it, why don't you figure out a way to price it and market it so that the people you intended it for will want to come see it?

Heck, the Theatre Scene supports social media marketing - heck, we even participate in it - but we agree that shows are better served when patrons post their experiences AFTER the show, or during INTERMISSION.  If the show is any damned good at all, no one should be tempted to pull out their phone.
Posted by C.L.J.